A group of determined local business people have come together for the first time in Perth’s history to create a museum dedicated to the city’s past and present. 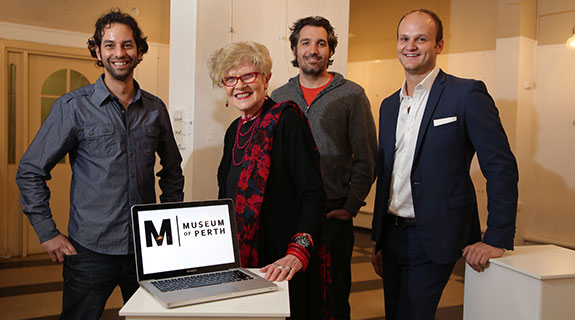 A group of determined local business people have come together for the first time in Perth’s history to create a museum dedicated to the city’s past and present.

The Museum of Perth, expected to open in August, will be housed in a tiny 75 square metre space in a laneway off the CBD Murray Street shopping precinct, nestled behind a new cafe named after Henry Saw, Perth’s first coffee roaster.

The museum will be dedicated to exploring Perth's architectural, cultural, social and political history.

It's neighbouring cafe, which will be run by Dome Coffees Australia Westralia Plaza franchisee Toby Brown, and Babooshka Northbridge cafe owner and filmmaker Jimmy The Exploder, is intended to act as a drawcard for the museum.

“The laneway cafe is going to bring people in to get a coffee and then they’ll walk in and they’ll see the space,” Museum of Perth chair Reece Harley said.

Mr Harley, who is also a City of Perth councillor, said the museum aimed to encapsulate a wealth of information in a quick and thought-provoking experience.

“It’s something that we want people to be able to do on their normal morning coffee run, something that’s really accessible, small, easy to get around in and interesting,” he said.

“And also because of the rotating exhibitions, something new every couple of months.”

A key part of the museum will be providing historical context to help inform opinions on current issues with exhibits such as Perth’s light rail network of the late 19th century through to 1958, its original coffee industry, and long-held connection to cycling, Mr Harley said.

“This museum isn’t about being sentimental and just showing how Perth was; it’s more contemporary than that,” he said.

“For example around light rail, there’s an ongoing debate around whether we should do it; but I don’t think it’s at the forefront of people’s minds that we had an extensive light rail tram network from 1896 to the 1950s and then we ripped it out.”

The museum founders have set up a crowdfunding target of $100,000 on not-for-profit online platform Chuffed to pay for permanent exhibits, and a microcinema playing archival footage of what Perth used to look like.

Permanent exhibits will depict a timeline from traditional owners to English colonisation, convict establishment, the gold rush, the Great War, art deco and Depression ages, WWII, baby boom and suburbia, then a period of “destruction and exodus” during the 1960s to 1990s, followed by a wrap up of ‘Now: a new urbanism’.

Museum of Perth secretary and walking tours Two Feet & a Heartbeat director, Ryan Mossny, said the museum was also keen to include personal collections and work with businesses with long-held connections to Perth such as Bankwest, Wesfarmers and the RAC of WA to display their memorabilia.

Mr Harley, whose grandfather was instrumental in setting up the city’s Department of Fire and Emergency Services Education and Heritage Centre, said while many people had previously championed a museum dedicated to Perth’s history, this would be the first time the idea had come to fruition.

“Everyone’s thought about it, I guess you could say I’m the first person to bring people together to actually achieve it,” he said.

Mr Mossny and Mr Harley said while the new museum and its website www.museumofperth.com.au provided a neat wrap up of Perth’s history that didn’t exist at any of Perth’s other museums, they hoped to increase traffic to other museums by encouraging its visitors to explore their boutique historical treasures.

“We want to be a one-stop shop and we’re going to have in here a list of the other museums in Perth for people to visit.”

Mr Mossny said that, like Perth’s other museums, the new facility had a very specific focus.

“None of those museums can summarise what the history of the city is. While they have an important part to play, what we’re trying to do is bring together the city’s architectural, cultural, social and political history.”