A Business News survey of industry confidence shows an economy increasingly balanced between those experiencing growth and, at the other end of the scale, those dealing with decline.

Twenty-seven per cent of respondents to the survey of 694 Business News subscribers and registered users said business had ‘improved somewhat’ in the quarter. 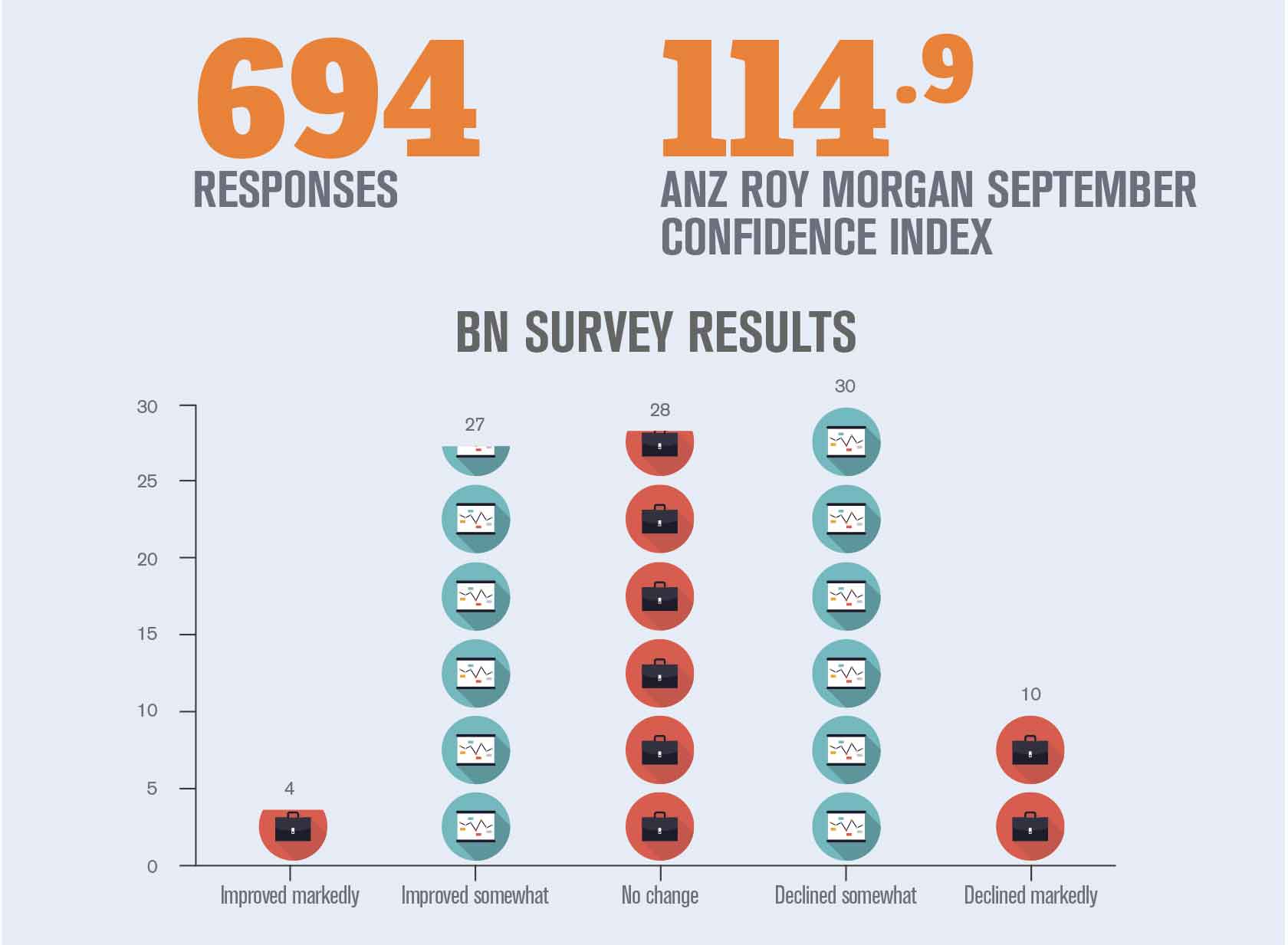 Only 4 per cent said it had ‘improved markedly’, however.

More than a quarter of respondents felt there had been no change on the 2015 financial year, indicating the climate is still tough for many.

It comes after Business News’ June survey results showed 24 per cent of business people felt the 2016 financial year was an improvement on 2015, while 53 per cent believed it had declined somewhat or markedly. That period was one of the toughest the state has endured in many years, however, with a contraction in state final demand, a measure of domestic spending, of more than 4 per cent.

There was also a modest rise in businesses entering administration during that time.

The September quarter has brought some positive news, however, with the state government announcing a much lower than expected budget deficit for the 2016 financial year.

The iron ore price also rallied, from around $US50 per tonne at the start of the quarter to a peak of around $US70/t in August.

With the steelmaking export such a prominent part of the state’s economy, price rallies are likely to bolster confidence in sectors far afield from mining itself.

WA unemployment was in the middle of the pack nationally at 6.3 per cent seasonally adjusted in August, the most recent figure at the time of writing.

The Business News numbers compare with the recent ANZ Roy Morgan national business confidence survey results in September, which registered a score of 114.9, up 6.3 points from August.

It is additionally 2.1 points above the level in September last year.

The index relies on a base number of 100, which indicates balance between positivity and negativity of sentiments.

ANZ’s results indicate the mood is more buoyant nationally than in the west. More respondents to the ANZ Roy Morgan survey believed their businesses were financially better off in 2016 than 2015, with 38 per cent feeling better off to 28 per cent worse off.

Around 41 per cent predicted they’d be better off in September 2017 than now, while 20 per cent felt they’d be worse off.

Western Australians are borrowing less through personal finance than at any point in the past decade, according to the latest numbers from the Australian Bureau of Statistics.

In the 12 months to August, $8.5 billion in personal loans was made in WA, down from $9.6 billion in the previous corresponding period and lower than at any time since the 12 months ending in April 2005.