CHIEF executives across Western Australia are gearing up for the sixth year of St Vincent de Paul Society’s CEO Sleepout, due to be held on June 18. 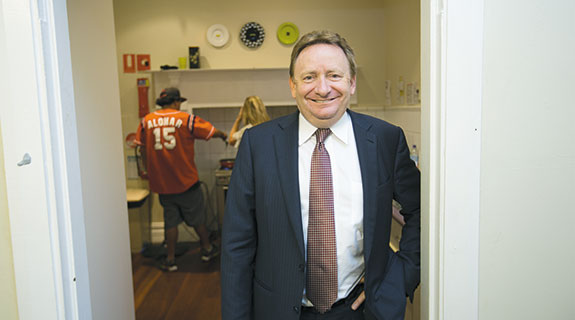 CASH CHALLENGE: Crown Perth’s Barry Felstead is aiming to grab back the lead in the fundraising table. Photo: Attila Csaszar

CHIEF executives across Western Australia are gearing up for the sixth year of St Vincent de Paul Society’s CEO Sleepout, due to be held on June 18.

Major CEO Sleepout fundraiser for the past two years, ABN Group managing director Dale Alcock, will not be participating this year, pitting several former fundraising leaders in a keenly fought battle to head the stakes in 2015.

Mr Felstead told Business News being involved in the fundraiser every year since its inception in WA had deeply affected him.

“I put a lot of time into it, it certainly has changed my life, it makes you more aware and it also makes you feel very lucky to be in a position where you do have a roof over your head,” he said.

Mr Felstead, who was lead fundraiser in the Sleepout’s first three years, is now aiming to take out top place again, with a goal to raise more than his previous best of $103,000.

He said he called in favours, cajoled family, friends and colleagues to secure more than 350 donations last year, after appealing to about 500 people.

“It’s about raising awareness and getting more in tune with what’s going on out there, because quite often it’s very easy as a company just to write a cheque and forget about it. This is a way to get a lot more involved,” Mr Felstead said.

Fellow six-time participant in the fundraiser, Shane Ball, said his involvement in the cause was personal.

Mr Ball, who previously took part as the managing director and founder of Swan Group, has left the construction and fit-out company and is now heading up a new business building high-end residential homes, called Ball Point.

Mr Ball said that, 15 years ago when he moved to WA, he would have been homeless without the aid of his girlfriend at the time.

“I was struggling financially and basically knew that feeling of not knowing where that next meal was coming from. That gave me the motivation to help support now that I’ve had a lot of luck and success in my business endeavours,” he said.