Specialist employment services provider atWork Australia has launched a pilot program in WA to assist skilled refugees find work they are trained for. 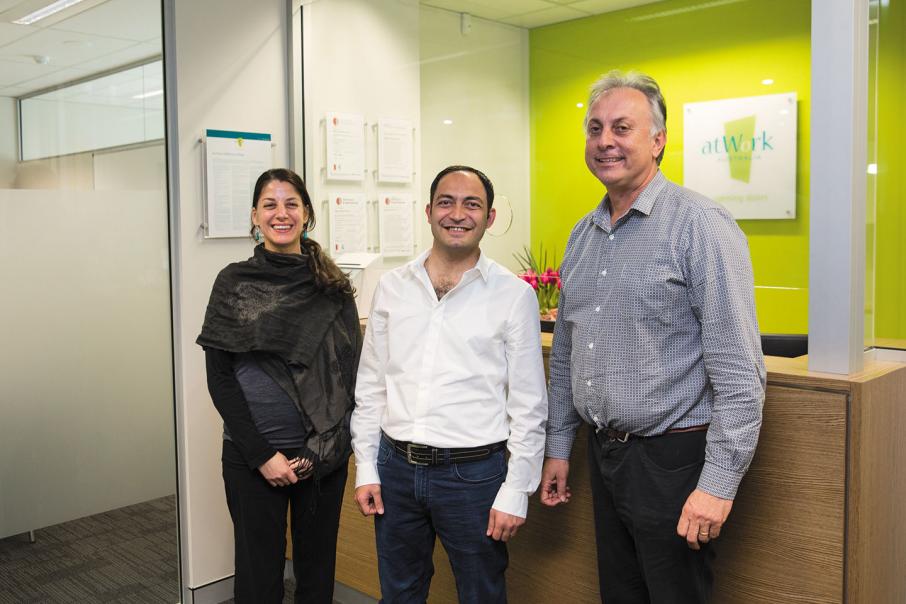 Jacqui Luff with Madg Nana and Michael Kolomyjec (right) are optimistic about the opportunities the atWork career program can provide. Photo: Attila Csaszar

After securing refuge in a foreign country, navigating its employment system and developing contacts from scratch is an enormous hurdle.

Opportunities for skilled refugees to secure jobs they are qualified for, and have worked towards, can be easily missed.

The employment services division of private company Work Health Group, atWork Australia, offers a targeted service that provides assistance for refugees with professional or trade skills and vocational English language proficiency, provided they hold a humanitarian visa and have been in Australia for less than five years.

The government program is a pilot service that runs from June this year to June 2019, with the potential to be adopted permanently.

Prior to this program, skilled and unskilled refugees had been lumped together and directed to Jobactive or the Disability Services Program, which placed minimal focus on obtaining high skills-based jobs for qualified refugees.

atWork Australia general manager Michael Kolomyjec said its brief was to make sure refugees were able to utilise the skills they had brought to Australia to benefit the labour market and economy.

“A lot of their qualifications aren’t recognised, for others they won’t have knowledge of the employers in the market and they’re just trying to find their feet in a new country,” Mr Kolomyjec told Business News.

He said atWork Australia provided advice on the bridging courses and pathways refugees might need to take to progress in their careers and communicated with potential employers on their behalf.

“Our services try to place people into work so they have sustainable careers going forward and eventually come off the Centrelink system,” Mr Kolomyjec said.

Mr Nana said the atWork career pathway coordinator Jacqui Luff had provided him with a lot of support.

“The process of communicating with the HR people is different from my country,” Mr Nana told Business News.

“So, letting Jacqui introduce the program and communicate in her way, it’s easier to get in touch with them directly.”

Mr Nana was born in Syria, where he also studied civil engineering.

After Mr Nana moved to Jordan for a temporary work project, he was unable to return to his home country because of the Syrian war, making him an asylum seeker in Jordan.

“It was quite difficult to find a job there,” Mr Nana said.

“For a Syrian especially it was so difficult, because you even cannot get a driver’s licence as a Syrian because they fear we will take all the jobs.”

He said after he and his family applied for Australian humanitarian visas and were accepted, he tried to advance his English as quickly as possible.

“I got a diploma qualification in project management (at Curtin University) hoping that would help me find a job, but I’m still struggling with the Australian experience and the requirements, that’s why I’m here (at atWork),” Mr Nana said.

“One employer will see on my resume that I have eight or nine years of experience, so that might be the employer who will say I’m over qualified,” he said.

“And if I apply for a job, which requires eight or nine years of experience they’ll say I’m not qualified.”

Ms Luff said she was optimistic about Mr Nana’s future in Australia and had made progress with his case.

“Having spoken to several companies, I think there is this desire to promote diversity in the workplace,” Ms Luff told Business News.

“I always notice with taxi drivers here, I’ve met engineers, I’ve met teachers and they never got to fulfil their career aspirations in Australia because when they arrived they didn’t know how to navigate the system and they didn’t have those supports,” she said.

“Just the other day I was in a taxi with a gentleman from Bosnia, and he came over as a refugee many years ago.

“He was a phys-ed teacher in Bosnia, he loved it, it was his passion, and he said he just didn’t know how to pursue that in Australia.

“And when I told him about this program he said oh my god, if I only we had this when he came to Australia.”

Mr Kolomyjec said atWork would be hosting a launch event to build networks with employers and other stakeholders on November 16.