Programmed Maintenance Services’ six-month pursuit of its larger competitor, Skilled Group, has paid off, with the Melbourne-based company backing a $424 million takeover offer. 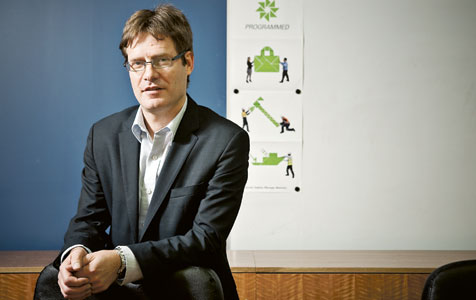 Programmed Maintenance Services’ six-month pursuit of its larger competitor, Skilled Group, has paid off, with the Melbourne-based company backing a $424 million takeover offer.

Skilled has entered into a scheme implementation agreement under which shareholders will be offered 25 cents and 0.55 Programmed shares for every Skilled share they own.

The offer values Skilled shares at $1.79 per share, making it a 39.6 per cent premium to Skilled’s 30-day volume weighted average price.

Programmed provides staffing, maintenance and project services across a broad range of government and private sector businesses, while Skilled leads the market in blue-collar labour hire in Australia.

Programmed non-executive chairman Bruce Brook said the combination of the two companies would unlock substantial value for both companies’ shareholders, including over $20 million of identified synergies, and create a more competitive and efficient workforce solution provider.

If the deal is successful, Skilled shareholders will end up holding 52.4 per cent of the combined entity, with Programmed shareholders owning the remaining stake.

That’s slightly less than what Programmed had offered when it first engaged Skilled about a proposed merger in December last year, with the original proposal to give shareholders of both companies a 50:50 share.

Skilled’s head office in Melbourne will become an operating office, while the combined company will be based at Programmed’s headquarters in Perth.

Commenting on the new terms, Programmed managing director Christopher Sutherland said it was a fair exchange.

“We’ve had good discussions about what the strategic rationale for bringing the two businesses together is, how we might bring them together, and more importantly, we’ve done detailed work around what those synergies are, and both parties have more confidence about how we make it a stronger combination going forward,” he said.

“Both sides have agreed that we would be more effective in the marketplace as one combination that either company would be by themselves.”

Upon completion of the transaction, Programmed will retain its current board structure, while the Skilled board will resign, including managing director Angus McKay, who entered the job in January.

Mr Sutherland said while there had been no further decision made at this time, the Programmed board was open to expansion.

“We’re going to be looking to pull the best management team we can from both sides of the business,” he said.

Skilled chairman Vickki McFadden said the near-term financial benefits to the company's shareholders resulting from the transaction were compelling.

"Our two organisations share a focus on delivering solutions that make our clients more productive and competitive,” she said.

In December, Programmed proposed a cash and scrip merger of equals with Skilled, whereby Skilled shareholders would receive an additional 25 cents per share in cash, valuing Skilled’s shares at $1.39 each (at the time) and the deal at about $325 million.

However the deal was rejected by Skilled, with the company saying it undervalued the business.

The new agreement is expected to be implemented in mid-October.