Skies not so friendly for Qantas

The public, and major banks, are disappointed with the service level, and service offering, of Australian icon Qantas. 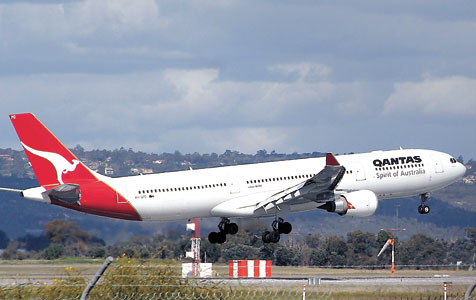 It is not strictly fair to compare an airline with a hospital, but when looked at in pure business terms there are parallels – management skill, staff competence and happiness, profit growth and share price trend.

For those reasons, and after acknowledging the differences, it was interesting last week to evaluate the financial attractions of two pure-Australian companies – Qantas, once the national flag-carrier, and hospital operator Ramsay Healthcare.

The rationale behind the appraisal started as a portfolio management exercise to test whether Qantas or Ramsay was a better bet, with the result obvious from the start of the process – buy Ramsay, sell Qantas.

However what became more interesting was the explanation for such an opinion, which can ultimately be justified after applying an assessment favoured by the world’s most successful investor, American billionaire Warren Buffett, who recommends test driving the product of an investment target wherever possible.

Coca Cola, for example, is easy to test and obviously liked by the Buffett-run Berkshire Hathaway because it owns 9 per cent of the big drinks company. American Express is another (14 per cent owned), as is cable television company DirectTV (7 per cent).

In Australia, Qantas and Ramsay are easy to test, though in Ramsay’s case this is best done by speaking to staff and management rather than checking in for a surgical procedure.

Where Ramsay passed with flying colours was in staff management and its ability to retain the best nurses and backroom people by having flexible employment terms. A nurse, for example, never seems to actually leave Ramsay’s books.

Even when she-or-he tries another job, or goes overseas, there is an open door for a return when a vacancy occurs. This is a policy that suits both parties and ensures a deep pool of available talent, while providing workers with enormous flexibility and creating what seems to be a happy workplace – quite an achievement in any business.

Qantas, on the other hand, is not a happy workplace, partly because of the cost pressures affecting all airlines and partly because of poor management decisions, such as the bizarre tie-up on international services with the Dubai-based Emirates airline.

The Emirates deal, as a few readers might remember, was sharply criticised in the online version of this column in April when questions were asked about what shareholders and passengers could possibly gain from its ‘non-equity merger’ with Emirates.

Back then the deal was described as a ‘fox and hen’ situation, with Qantas behaving like a chook that had invited the Emirates fox into the henhouse, with predictable consequences – the fox got fatter and the hen did not.

Sadly, or predictably, that seems to be precisely what’s happening, with the international services of Qantas sliding into deeper trouble, the domestic division facing ever-stiffer competition, and some of the world’s top investment banks starting to question the wisdom of the Emirates deal.

From a passenger’s perspective, the extra choice offered for side trips into Europe on a combined Qantas/Emirates ticket seems appealing, though that’s not necessarily the case for travellers starting their journey in Perth, while selling more tickets does not necessarily translate into higher profits.

As was pointed out in April, Qantas has effectively abandoned Western Australia’s international travellers, handballing most of them to a code-share Emirates flight, which means loyal Qantas customers feel like second-class travellers and investors are starting to understand that any profits generated by Qantas from WA ticket sales are discounted.

In effect, Qantas has surrendered its western flank to Emirates, which means it will forfeit growth opportunities from a state that, while having only 11 per cent of the Australian population, is home to the richest Australians who account for more than 30 per cent of the country’s exports.

In their latest assessment the banks are becoming wary of Qantas. Credit Suisse and JP Morgan rate the airline as ‘underperform’. Deutsche Bank, CIMB and Goldman Sachs are neutral. UBS and Macquarie believe the business can regain profitability and rate it a ‘buy’.

The key test, however, is the international operation, which Credit Suisse described as being of concern, and struggling to generate profits, including “the unclear earnings upside from the Emirates Alliance”.

It has taken the banks seven months to recognise that Qantas International is not passing the Buffett test of being a business that please the customer.

On the stock market, the Qantas versus Ramsay comparison is even more obvious. Since this column’s April 9 criticism of the Emirates deal, Qantas shares have fallen by 46 per cent from $1.76 to recent trades around $1.20. Ramsay, over the same time, has risen by 17 per cent from $32.11 to $37.57.

If there is a key to the gap between Qantas and Ramsay, it lies in the way people, either employees or customers, are managed. Ramsay does it well. Qantas has a lot to learn, and quickly.

Last week, two of the big names of the finance world published views that were 180-degrees apart or, to put it in money terms, one bank had a view that was half that of its rival.

The banks in question were Credit Suisse and Goldman Sachs, and the problem they share is striking a forward price estimate (best guess) for the price of iron ore, which some tipsters reckon is overdue for a big fall and others see as staying higher for longer.

Credit Suisse is the optimist, revising upward its 12-month FMG price prediction to $7.50, which is a very handsome $1.73 (30 per cent) above the recent price of $5.77 – more than enough to trigger investor interest.

Goldman Sachs, on the other hand, told clients two days after the Credit Suisse report that it saw $3.80 as the 12-month FMG price target, 34 per cent below the current price.

So, if you think you’re confused about the future direction of the market, spare a though for the analysts who are paid to get it right, or else.