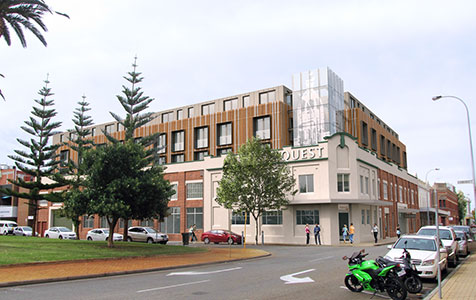 The company has signed a 15-year leasing deal with hotel operator Quest for the 73-room, four-and-a-half star proposed development.

The development would include a gym, parking and conference facilities within the building's 1920s heritage facade.

Sirona hopes to appoint a builder to commence construction in December this year, with completion targeted for March 2016.

It has estimated the project's development costs at $30.3 million and says the hotel will generate net revenue of $36.5 million.

The company has extended an offer to wholesale investors to tip in $1.9 million as part of a $10 million syndicate.

It has placed the minimum investment at $25,000 and promised a post-construction cash yield of 11 per cent per annum, increasing to 15.7 per cent by the sixth year of the Quest lease.

The investment group has a substantial presence in the redevelopment of Fremantle.

Sirona is backing the Fremantle council’s $300 million Kings Square redevelopment and is also eyeing opportunities in hotel and hospitality developments.

Its plans include a joint venture agreement with boutique developer Match Group to develop the Heirloom Apartments project at the heritage-listed 'Fort Knox' building on Freo's Queen Victoria Street.