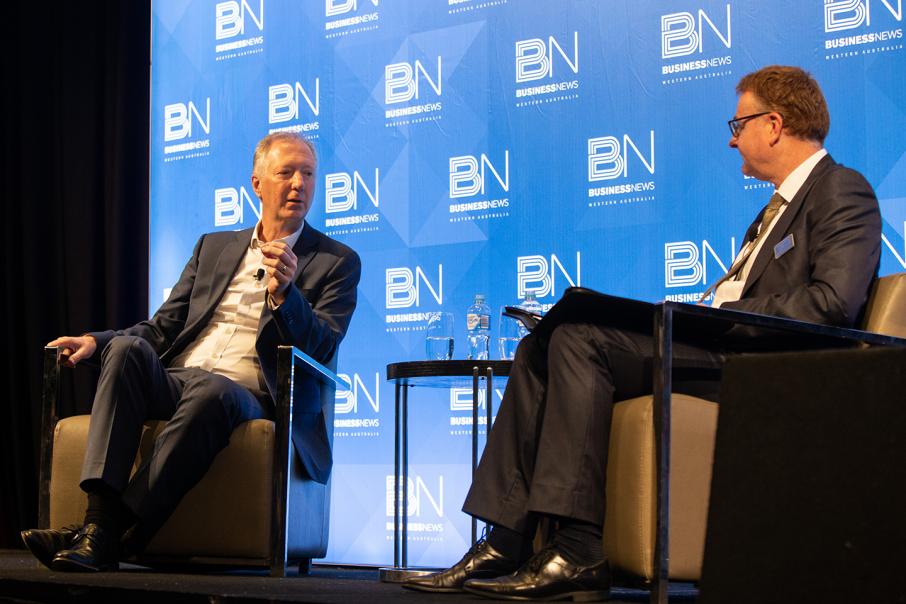 David Singleton knows how to turn bad problems into great outcomes, after the many opportunities he has had to develop that skill throughout his career.

One recent example was when hackers broke into his company’s computer network.

The chief executive of shipbuilder Austal said he believed the intrusion, which was revealed in November 2018, would result in an improved business.

Speaking at a Business News Success & Leadership breakfast today, Mr Singleton said Austal had failed by allowing the IT breach.

The incident showed how a leader needed to turn setbacks into an advantage, he said.

“We had a cyber attack some while ago; it made me realise if someone got into the brain of a vessel, that would be a really bad day,” Mr Singleton said.

“Somebody from somewhere got inside our system and started stealing stuff.

“It was a really depressing day.

“(But) it was actually an opportunity, we were really lucky.

“Somebody broke into our house and there was a Rembrandt (painting) on the wall.

“The thieves stole the television set, but they could’ve stolen the Rembrandt.”

The breach helped get the workforce behind big improvements in cyber security culture, he said.

A similarly tough moment in his three years at the helm was when a competing bid by German company Luerssen and Henderson-based Civmec was chosen for the federal government’s offshore patrol vessel build project in November 2017.

Ten vessels will be built in Western Australia under the $3.6 billion program.

“It was probably the biggest shock of my life … that we lost that,” Mr Singleton said.

“In our hearts we knew we were gonna win, so when we lost it it was devastating.

Although there had been a personal impact, he said it had been important to be positive for his staff.

There was a protracted period of negotiations following the Luerssen venture contract win, with rumours that Austal would have a stake in the rollout.

In the end, however, it was not a good deal for Austal, Mr Singleton said.

“For anybody who runs a business here, I guarantee you would not have taken the job they asked us to do, it was all downside, no upside,” he said.

Things have been broadly positive since, however.

The company’s share price was $2.89 at the time of writing, 61 per cent higher than one year ago.

Mr Singleton said Austal had collected a great team of people for the project, which came in handy when the business’s commercial shipbuilding division hit a growth period.

A shipyard in Vietnam and expansions at Henderson and in the Philippines were all the eventual outcomes.

“If I look back on it, it was a bad event, but what came out of it was really good stuff,” Mr Singleton said.

Those overseas operations fitted well with a bigger picture.

“Let’s do the high tech stuff here in Australia … and use the low-cost environment to the north of us in order to support that, that’s what Austal is doing.”

Mr Singleton’s capacity to turn a tough situation into a win may date back to his childhood.

He grew up in the UK at a time when unemployment was about 14 per cent.

“People talked about a whole generation of people who would never work,” Mr Singleton said.

That affected him, with his dad out of work and unable to support him through university.

The big breakthrough was when he was offered scholarships by businesses to study at university, eventually settling on one with the Ministry of Defence.

From there, Mr Singleton advanced to lead BAE Systems business units, including one famously troublesome venture – the Alenia Marconi Systems.

The two sides of the company, Italian and British, were clashing.

“The business was fractured, it was quite a nasty conflict going on in the business,” Mr Singleton said.

“It was a lesson for me on how you deal with a culture that is eating itself alive.

“When a business is at war with itself, it’s because they don’t have an enemy ... the enemy was within.”

He said his solution had been to turn the attention onto the main competitor, French business Thales Group.

After his time in Rome helming Alenia Marconi, Mr Singleton moved to Perth, driven in good part by a desire for work life balance. He took the reins at Clough.

He said the WA-founded contractor presented its own challenges.

“When I was a young person, a lot of the jobs I got were businesses in trouble … and Clough was in a similar sort of position,” Mr Singleton told the Success & Leadership forum.

A big warning came when he went to visit the accounts department, which he said had a unique approach to stewarding finances.

“He got this whiteboard out with numbers all over it, and he started pointing to different numbers,” Mr Singleton said.

“I said ‘Can you give me a spreadsheet?’

A further problem was that there were large risks that could impact profit forecasts.

Mr Singleton said he had moved the business towards oil and gas because there was an opportunity for a competitive advantage when the industry was nascent here.