Plans for another apartment tower of more than 50 storeys in the Perth CBD have emerged, with Singaporean developer Fragrance Group’s $200 million Milligan Street proposal to vie for the title of Perth’s tallest residential building. 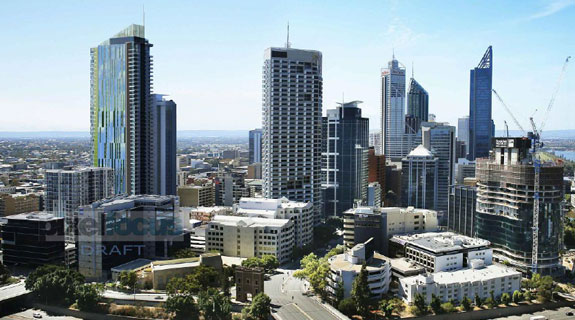 An artist's impression of how Fragrance Group's Milligan Street proposal (far left) would fit into the Perth skyline.

Plans for another apartment tower of more than 50 storeys in the Perth CBD have emerged, with Singaporean developer Fragrance Group’s $200 million Milligan Street proposal to vie for the title of Perth’s tallest residential building.

Fragrance Group has lodged a development application with the City of Perth to build a 52-storey tower containing 359 apartments, as well as a 37-level, 406-room hotel at the corner of Milligan and Murray streets, on a site it purchased from Georgiou Capital in late 2014 for $30 million.

Fragrance Group’s plan also includes the restoration of the historic Pearl Villa, which has been incorporated into the hotel portion of the development proposal.

The residential tower would be 179 metres, making it taller than the neighbouring QV1, which at 163 metres is the city’s fourth-tallest building. Fragrance Group's plan for Milligan Street comprises an apartment tower and a hotel.

Currently, the city’s tallest residential building is Equus, at 111 metres.

However, apartment developers have plans to change that over the next few years, with eight proposals in the works that exceed 117 metres.

Construction is under way on only one of those projects, the 38-storey, 117-metre Concerto by Finbar Group, on Adelaide Terrace.

The Fragrance Group proposal is the second-tallest apartment building proposed for Perth, only eclipsed by EG Funds Management and ICD Property’s mammoth plan for the old Megamart site on the outskirts of the CBD, which comprises two towers of 202 metres and 174 metres, respectively.

The Milligan Street plan has been backed by the City of Perth’s design advisory committee, and will be evaluated by the local development assessment panel in coming weeks. The historic buildings on the Milligan Street site will be retained as part of the development.

Fragrance Group has been busy in Perth in recent months, following the marketing launch earlier this year of its NV Apartments, located on Murray Street near Shafto Lane.

The NV Apartments project is another behemoth; two towers, one containing 401 apartments and another containing 487 hotel rooms, which is scheduled to begin construction in August.

Fragrance Group also owns a development site behind St Andrew’s Church on St Georges Terrace, where it holds an approval for a 41-storey, 280-apartment tower.

Business News understands the St Andrew’s Church site plan is being evaluated, but the expectation remains that it will be another significant tower.