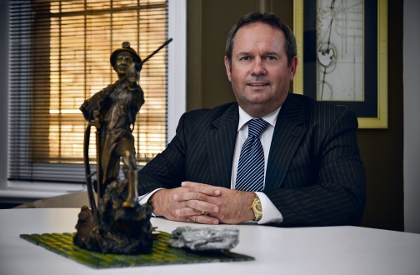 Integra Mining has agreed to a $426 million takeover by fellow gold miner Silver Lake Resources in a move that will create one of the nation's larger producers of the precious metal.

The deal between the two Western Australia-focused gold miners comes at a time when institutional investors have been calling for resource companies to be braver in the merger and acquisition space, arguing that bargains abound because of reduced share prices.

The takeover will create an entity with resources totalling 6.6 million ounces of gold, and current production of 200,000 ounces per year.

"The strategic and financial logic of the combination is clear, driven by the complementary nature of the two companies' projects and the strong organic growth profile of the combined business," he said in a statement on Monday.

Integra managing director Chris Cairns said while he believed Integra would have a bright future as an independent company, the deal was in shareholders' best interests.

"Investors are increasingly attracted to gold mining companies which enjoy the lower risk and economies of scale associated with multiple operations," he said in a statement.

"This deal will enable Integra shareholders to benefit from being part of a bigger and more diversified company."

Silver Lake has production and exploration assets in three locations across WA, while Integra's main assets is the Randalls Gold project, 60 kilometres east of Kalgoorlie, which has been in production for nearly two years.

Integra shareholders will receive one Silver Lake share for every 6.28 Integra shares they hold, representing a premium of almost 44 per cent to the last trading price of Integra shares.

Integra shares were down 46 per cent for the year before they shot up by 8.5 cents, or 27 per cent, to close at 40 cents following the takeover announcement today.

The deal values Integra at $426 million.

The Integra board has accepted the deal, but the takeover still requires approval from regulators and Integra shareholders.

Silver Lakes Resources will retain all board and executive roles with Les Davis as managing director and Paul Chapman as chairman.