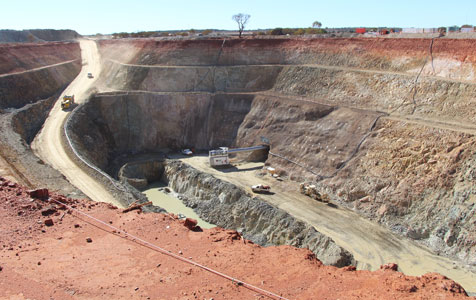 OFF THE MARK: Doray Minerals has completed the first gold pour at its Andy Well mine near Meekatharra last month.

After a grim six months, Western Australia’s gold mining sector is showing signs of flickering back to life.

Having plunged earlier this year to lows around $A1,300 ounce, the gold price has recovered to nearly $A1,550/oz.

That has flowed through to the share price of most gold stocks, evidenced by the 42 per cent recovery in the S&P/ASX All Ordinaries Gold index in past quarter.

That recovery helped Silver Lake Resources complete the first major capital raising by a WA gold producer in the past six months.

In addition, Doray Minerals has emerged as the state’s newest gold producer, while the Tropicana mine – jointly owned by AngloGold Ashanti and Independence Group, and expected to be one of the state’s largest – entered the commissioning phase this month.

This run of positive news follows a period during which four WA gold mining companies failed, a number of mines shut down, and job losses were felt across the sector.

After all of this change, Business News’ updated ranking of gold miners shows the industry in WA continues to be dominated by the big North American miners.

Notably though, the state’s five largest producers, which also include Gold Fields, Newcrest and St Barbara, all reported a decline in production, reflecting the industry’s new-found focus on costs and margins.

Perth-based Regis more than doubled production last year to 242,000oz after adding the Garden Well operation to its established Moolart Well mine.

Unlike most of its peers, Regis is continuing to invest for growth, committing in July to spend $20 million on the Rosemont stage 2 plant.

That will lift Regis above St Barbara to become the state’s fifth largest gold miner.

Millennium Minerals was a new entrant to the list, after completing the first gold pour at its Nullagine project about 12 month ago.

There was a long list of casualties this year, with Apex Minerals, Navigator Resources and Reed Resources among the worst affected.

The miners that have failed or shut down their mines were simply not viable after the gold price collapsed in the first half of the year.

They will be looking with envy at industry leaders such as Regis, which has reported C1 cash costs of just $562/oz at its Garden Well operation and $563/oz at Moolart Well.

The Tropicana mine, jointly owned by AngloGold Ashanti and Independence Group, is expected to be one of the sector’s lowest cost producers, with a cash cost of between $590/oz and $630/oz.

In terms of ‘all in’ cash costs, Northern Star Resources’ Paulsens mine is one of the lowest cost producers, at $977/oz.

Veterans such as Silver Lake Resources managing director Les Davis have seen these cycles before.

Silver Lake last week announced a $47 million placement underwritten by RBC at 85 cents a share – well above its low for the year of 51 cents but way down from last year’s peak of $3.96.

The company is seeking a further $15 million under a share purchase plan and directors intend to tip in an extra $1.2 million, subject to shareholder approval.

The overall proceeds will be used to repay the company’s outstanding debt and top up its working capital.

“It was the first time we’ve had debt and we wanted to extinguish that,” Mr Davis told Business News.

“We’ve been able to clear the debt and move the company forward.”

The borrowings were taken on as part of the company’s major expansion program during 2012 and early 2013, which included the takeover of Integra Mining, the acquisition of the Great Southern assets, and the development of its Murchison operations, which achieved commercial production in June.

Silver Lake recorded impairments of $351 million, resulting in a net loss of $319 million, but Mr Davis is unfazed.

“The impairment was mainly gold price driven; the underlying value of the business has probably never been better,” Mr Davis said.

He insists the growth initiatives leave the company better placed than it had been previously.

“We’ve gone from being a single-asset business to having three mining operations with three mills. That gives us a lot more flexibility,” Mr Davis said.

He acknowledges the March quarter was a particularly difficult time, with low production grades at its established Mt Monger operation, a commercial dispute with its EPC contractor at its Murchison development, and the falling gold price.

But he believes Silver Lake was one of the first miners to respond, when it reviewed production plans in April.

Over the next four months its continuing review culminated in the deferral of capital projects, most notably the underground development at Murchison, along with directors and staff taking pay cuts.

Like other miners it has been going through every aspect of its operation, and that includes pushing contractors for better rates.

Gold Fields has illustrated the scope for contract rate reductions in its annual report.

At its Agnew mine, contract rates for a new development contract that started in March are 12 per cent lower than previously applied.

Silver Lake’s restructuring was designed to ensure the business is sustainable at a gold price at $A1,350/oz.

The company is planning to hold annual production at about 200,000oz for the next two years but has multiple growth options beyond that time.

“It’s very hard to put in concrete plans when you have such a volatile gold price,” Mr Davis said.

“We would need a sustained stabilisation in the gold price before going ahead with our growth plans.”

If Silver Lake does press ahead with growth plans, it has projected annual production of more than 350,000oz from 2017 onwards.

Doray Minerals has enjoyed a good run since listing on the ASX in 2010.

Soon after listing, it discovered a high-grade deposit, located near the surface and near established infrastructure not far from Meekatharra.

Managing director Allan Kelly had worked in the same area for the old Western Mining, which was looking for a large ore body to support an open pit mine.

“If you get an opportunity, you need to make the most of it,” Mr Kelly told Business News.

“We set up the strategy, put our head down and just kept going, no matter what was going on in the market.”

He said current circumstances were in many ways fortuitous for the company, as it was hiring staff and contractors when a lot of heat had come out of the market, and was starting production when the $A gold price has recovered.

Doray has put in a hedge so that half its output over the next 15 months will be sold at $1,620/oz

Beyond that, Mr Kelly sees potential for at least one more lode, to keep the project running for six years or more.

After Doray clears its debts, he would like the company to establish a $10 million exploration program; and he’s also starting to think about possible acquisitions.

“We may buy another project, or even do a corporate deal,” Mr Kelly said.

“That’s a really good opportunity at the moment.”