SPECIAL REPORT: New retail property developments are driving offerings that capitalise on lifestyle needs, but five of the biggest projects are yet to push the button. 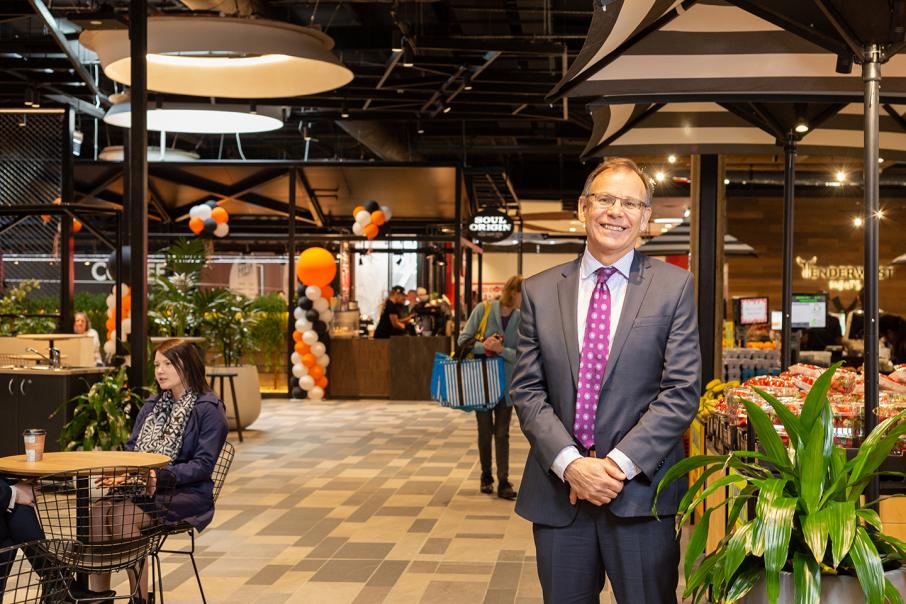 New retail property developments are driving offerings that capitalise on lifestyle needs, but five of the biggest projects are yet to push the button.

With the click of a mouse or touch of a screen, it’s easy to scroll through an online catalogue of retailers and products, shopping without the need to browse physical stores.

But there are certain things that the online world can’t replicate, and Perron Group chief executive Ross Robertson is banking on customers’ desire for sensory experiences being among them.

The Perth-based property group’s $65 million redevelopment of its Belmont Forum centre culminated with the opening of the new Fresh Food precinct earlier this month.

Comprising 11 independent food outlets, the precinct includes a specialty butcher and seafood operator, as well as a new Coles, and follows a revamped dining precinct, which opened in 2017.

Mr Robertson said Perron started its renewal of Belmont Forum in 2015, after identifying the need to offer a variety of shopping experiences.

“Fresh food is one of those products that shoppers like to connect with,” Mr Robertson told Business News.

“They like to touch and feel it, knowing they’re not only selecting the freshest ingredients but are also buying quality, locally sourced produce.

“Our aim was to achieve a best-in-class fresh food shopping experience, along with a vibrant dining precinct that would stimulate an extended night-time economy.”

Disrupting the traditional nine-to-five shopping centre paradigm is top of mind for Scentre Group, which is investing about $1 billion to expand three of its Perth centres.

Scentre Group completed the first stage of its Westfield Whitford City redevelopment last year, investing $75 million in the revitalisation of its dining and entertainment hub, which included the introduction of a microbrewery, as well as the creation of a games arcade featuring a bowling alley.

The retail group has also spent $350 million at Westfield Carousel on a rooftop dining and entertainment space and a new fashion mall, which is set to open August 30. 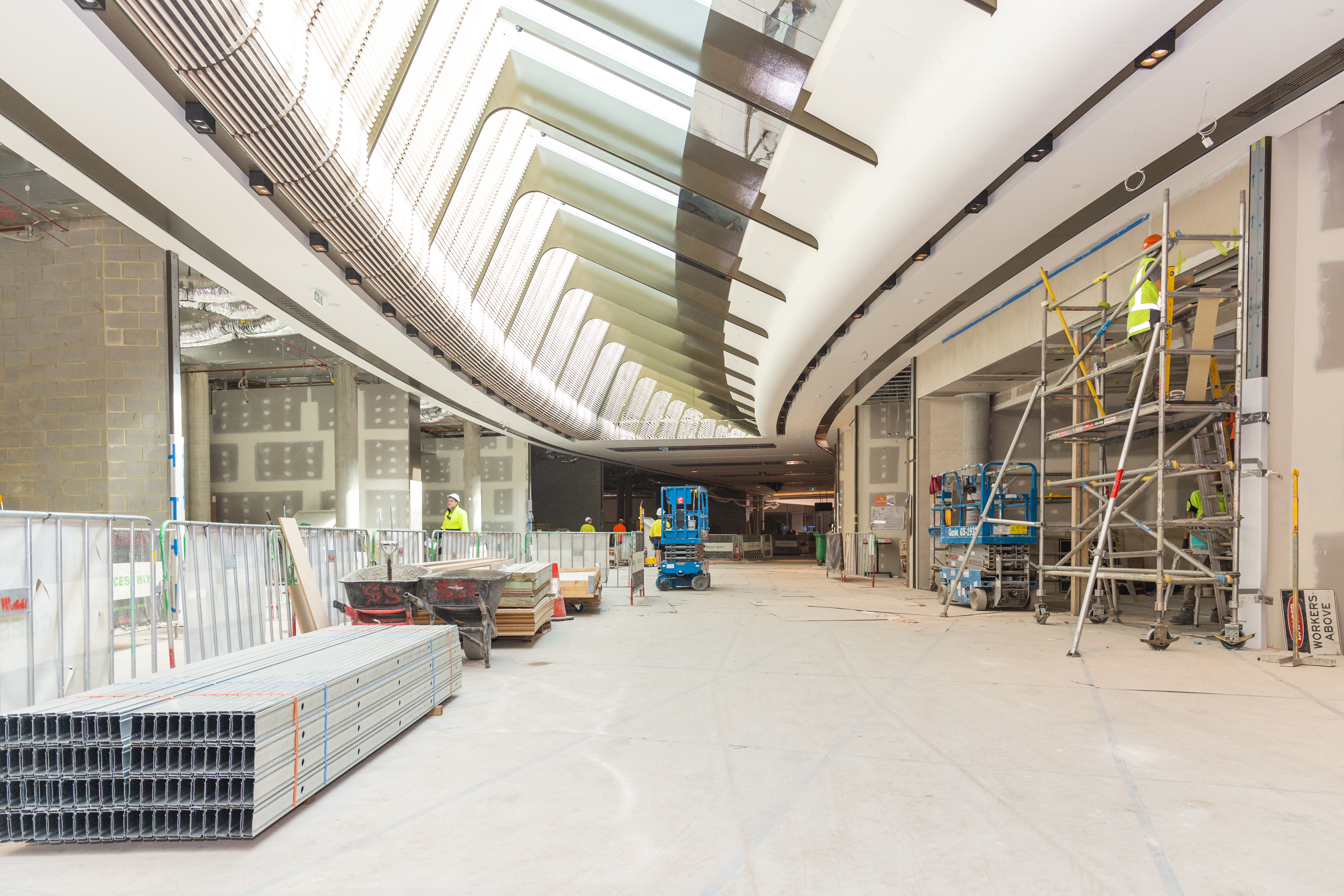 It will become the state’s largest shopping centre as ranked by gross lettable area on the BNiQ Search Engine (see page 28).

The organisation has a similar vision for Westfield Stirling (formerly Innaloo), where it plans a $600 million expansion, though a start date is yet to be finalised.

Scentre Group general manager development Roy Gruenpeter said the introduction of 14 new restaurants and the revamped Events Cinema at Whitford City had led to a significant increase in customer traffic.

“We are in an extremely competitive environment, with multiple bidders competing for the consumer dollar, be it from the digital space or simply other sectors,” he said.

“The retailer and product mix we offer is broader than ever before and has evolved to include all elements of lifestyle and wellbeing.

“As a business, Scentre Group has shifted away from the traditional concept of shopping centres.

“We call them ‘living centres’.

“Our customers are experience focused, coming into our centres for much more than shopping; our centres are places where people come to be entertained, relax, dine, socialise and shop.”

Major retail developments valued at almost $5 billion have been completed, are under way, or are planned for Western Australia, with the top four (ranked by cost) yet to formalise project timelines (see page 22).

These comprise Karrinyup Shopping Centre, Garden City, Westfield Stirling and Galleria Shopping Centre. Details on the next stages of Westfield Whitford City’s transformation are also yet to be announced.

This totals about $3 billion worth of projects, out of the state’s current pipeline of approximately $5 billion.

Business News reached out to the owners behind five of the biggest projects, who said future dates were yet to be confirmed.

This year is a busy time for retail project delivery, with more than 98,000 square metres of space to be added to market.

Among them is the $350 million redevelopment of Mandurah Forum, which opened in March and introduced major retailers David Jones and H&M to the centre.

Other projects include the $150 million DFO at Perth Airport and the $100 million Midland Gate extension, as well as Plaza Arcade’s $6.5 million makeover with new anchor tenant UNIQLO. 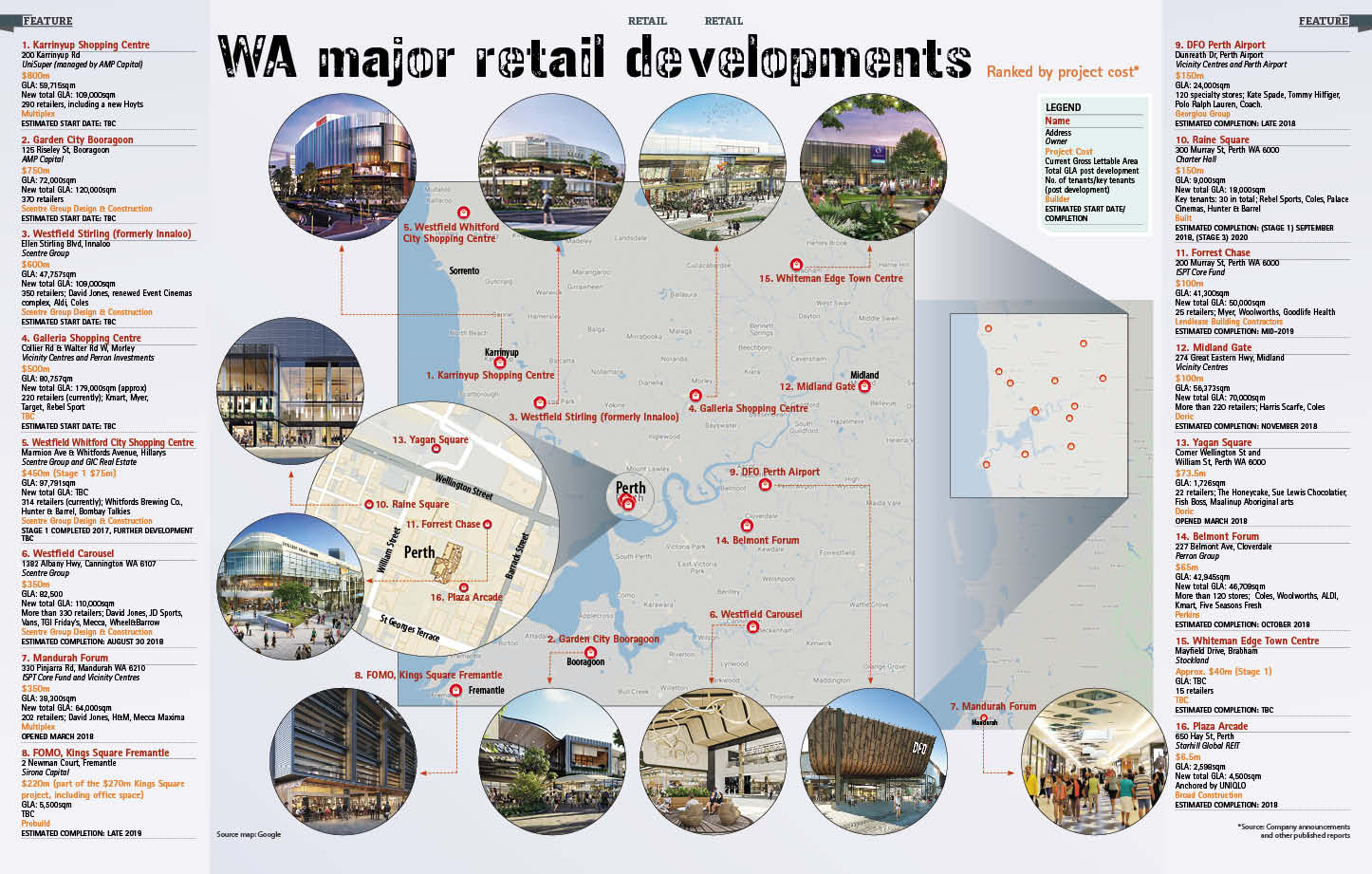 The first stage of Raine Square is also due for completion next month, with owner Charter Hall investing $75 million into updating its dining, retail and entertainment offerings.

It forms part of a larger $150 million three-stage project, with plans for a revamped Murray Street fashion precinct opening next year, and the development of The Royal Hotel (to open in 2020).

Charter Hall head of office development Andrew Borger said with all the neighbouring development, including Yagan Square and the new Perth Busport, the group realised that site accessibility and connectivity (both internally and into neighbouring precincts) would be critical to ensuring Raine Square remained relevant.

“On completion, Raine Square will be a true late night, seven-day retail, dining and entertainment precinct in the heart of the CBD,” Mr Borger told Business News.

“Online shopping is a popular and convenient option for many. However, there is an appeal about the experience that bricks and mortar shopping provides customers that won’t go away, and this space considers that.”

Mr Borger said natural lighting, glass facades, greenery, and heritage restoration were some of the design elements the group hoped would enhance the shopping experience.

Lease Equity managing director Jim Tsagalis, who is heading the leasing strategy for the $100 million Forrest Chase redevelopment, said the CBD had distinct advantages, particularly with its spread of independent offerings over chain replicas.

“The CBD is still a work in progress in terms of construction, with Raine Square, Forrest Chase, (WA’s first) UNIQLO, the new hotel openings and new student accommodation in the east part of Perth.

“There’s also been (the completion of) Yagan Square and Hibernian Place that offer a different experience, that speak to an audience at night. There are more reasons to visit the city now.”

Mr Tsagalis said Optus Stadium, especially with the opening of Matagarup Bridge, had been another positive for the city, with many event-goers now passing through the CBD.

“We’re starting to see some improvement,” he said.

“WA probably had a perfect storm of a significant pullback of investment, and the high-low of the boom-bust commodities we’ve had has amplified it.

“Tenants are also trying to come to grips with whether they need to be omni-channel; for some online has been a significant growth area, others say it’s a necessary evil they don’t make money out of.”

JLL head of retail Ann Manifis said one of the biggest challenges emerging from the current spate of redevelopments was managing that influx of new space within a relatively subdued environment.

“There are definite pockets of retailers finding trading conditions very tough, but it’s not all doom and gloom across the whole retail market.”

JLL’s Q2 2018 retail market report showed seasonally adjusted retail spending growth in WA continued to slow, to be flat for the year to May 2018.

Spending growth was weakest in household goods (down 6.3 per cent on May 2017), followed by clothing, footwear and accessory retailing (down 1 per cent).

Meanwhile, cafes, restaurants and takeaway food recorded the strongest growth (up 4.6 per cent).

“The millennials eat out more than the previous generations.

“And we now work differently (i.e. full-time working households), which changes how we use our personal time, we’d rather go out for a quick easy meal. It’s a natural progression as to how we are evolving, so retailers and centre owners are capitalising on that.”

Ms Manifis said there was no doubt a push towards ‘experiential’ shopping was under way across the sector (see page 24).

“There are a portion of sales conducted online, but at the end of the day consumers still want to interact, we want to share the experience, connect with our community,” she said.

“Shopping centres provide the space to do that.”

Y Research reviewed the occupancy of the state’s 16 largest shopping centres, measuring the diversity and frequency of their tenancy mix to determine their similarity.

The report, conducted in 2017, found that about 45 per cent of retailers in each of the centres were the same, and at the time found that Lakeside Joondalup was the most diverse centre.

“It’s a period of significant change for retail; some major centres haven’t had any investment for nearly 20 years, and retailers are re-valuating how they best reach consumers,” Mr Stone said.

“There’s more emphasis on the design of centres, not trying to cram kiosks, (but) creating places where people want to hang out.

“Currently it’s all about food and beverage … so what’s the next innovation?

He said using land for non-retail development, for apartments or aged-care communities, was another likelihood.

A current example of this is Iris Residential, which has purchased land within the Garden City shopping centre precinct for its $100 million 124-apartment tower, Amara City Gardens.

Legislative changes such as strata reform and the Community Titles Bill 2018 could assist in driving shopping centre evolution further.

Under its current form, most mixed-use developments were governed under a single standard strata scheme, Ms Hailes said.

As a result, retail, commercial and residential uses generally fell under one scheme, often creating conflict over who funded what and who had access to different facilities.

The Community Titles Bill will allow for the separate management of different uses within a single project.

“We’re already seeing a move to more mixed-use developments in Perth where we don’t just have a retail hub on its own; it will likely incorporate medium or high-density residential components as well as other commercial uses,” Ms Hailes said.

“Once the legislation is in place, we are likely to see more redevelopments of this nature as the management structures will be simplified.”