European shopping centres are evolving to include more leisure and lifestyle pursuits in an attempt to provide an experience the internet can’t. 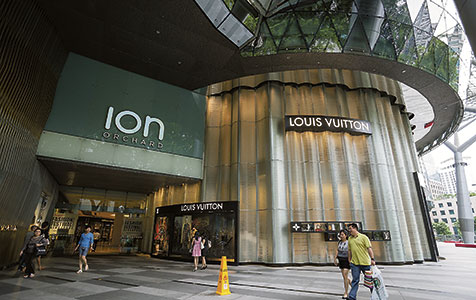 OPTIONS: While shopping in Singapore could be considered a leisure activity in itself, leisure and lifestyle offerings are becoming more prevalent in European malls.

Singapore was once described as the only country in the world where shopping is the national sport. Whether that’s true or not is irrelevant, because a worldwide shift in the design of shopping centres means leisure activities may soon be one of their fastest-growing attractions

The reason for the change, which is turning shopping centres from a pure retail experience into a combination of leisure and lifestyle pursuits, is the power of the internet and the way it is altering shopper habits.

Everyone with an internet connection knows what that means, because 20 years after the internet revolution started to affect business most Australians will have bought something from a website, with some people doing most of their shopping online.

The impact of internet retail is best seen in the share price of Australia’s biggest shopping centre owner, Westfield Group. Since early 2009 its share price has declined by about 20 per cent whereas the all ordinaries index has risen by close to 60 per cent.

Multiple factors are responsible for Westfield’s significant share price under-performance and one of the biggest is the effect of the internet, which has cut the number of people visiting its shopping centres, reduced the time spent in a centre, decreased the cash spend by shoppers, and effectively reduced the rent paid by shopkeepers to centre owners.

Australia is not alone in the shift of shopping habits, with the same forces being felt worldwide and shopkeepers struggling to find a way to fight back.

An answer to the problem could be emerging in Europe, where an analysis of recent changes to shopping centres is showing how alterations in design and tenant composition is boosting the number of shopper visits, and retention time.

The shift has rekindled interest in the owners of shopping centres as potentially attractive investments, with the London-based investment bank JP Morgan Cazenove dusting off its coverage of the major European centre owners such as Land Securities and Hammerson – the same company that built Perth’s first true shopping centre, Floreat Forum Shopping Centre.

What the bankers found was a marked increase in the amount of space in the best-performing centres that was being allocated for ‘food and leisure’.

Under the heading ‘recipe for success’, JP Morgan Cazenove found that increased provision of leisure activities in a shopping centre: “extends dwell time which leads to further shop visits and higher spend which, in turn, increases rents and drives asset value”.

A case study of Hammerson’s WestQuay centre in Southampton found that an expanded food court had added four minutes of dwell time to each shopper visit, boosting average shopper spend by £3 per shop which, when multiplied by the 15 million shoppers a year represented an extra £45 million in sales, or £4.5 million in rent which: “equates to £75 million potential value created”.

As well as 10 restaurants, the centre provides interesting added extras such as a driver training course and Amazon lockers for shoppers to collect their online purchases from the internet giant, which has pioneered the click-and-collect sales technique.

The conclusion to the JP Morgan Cazenove analysis of the shopping centre sector is that food and leisure is fast becoming an important way to fill centre voids, with cinema operators and restaurant chains actively seeking space, often taking less attractive space in higher floors.

Australia’s shopping centres owners are following the trend but Europe appears to be leading the way, which is probably a comment on the different demographics and depths of the recession in the region, which has sparked a more desperate hunt for solutions to the problem of missing shoppers.

According to the bank’s study, new shopping centres in Europe are allocating between 20 per cent and 25 per cent of their space to food and leisure, mainly restaurants and cinemas, a dramatic increase on the 5 per cent space allocation of 20 years ago.

“While this trend might not be new, we note that it is more of a necessity, and needs to be more sophisticated now that (retail) sales are being cannibalised by the internet,” JP Morgan Cazenove wrote.

The price of iron ore may be keeping investors and mining company managers in Perth awake at night, but what’s really worrying them is a more complex problem – that’s their true cost of production and the true price received.

No prize for spotting the use of word ‘true’ twice in the previous paragraph, because many people who dig into the financial reports of Western Australia’s iron ore miners invariably come away with a sense they haven’t quite understood the jargon.

It’s either higher, as with Gindalbie and Grange for their processed magnetite, or lower (Fortescue Metals Group, Atlas Iron and Mt Gibson Iron).

Then there are the impurity discounts, moisture discount and perhaps a premium for high-grade lump ore.

The net result is that the average price paid varies enormously from company to company, just as the cost of delivering ore varies wildly, depending on how the sale is booked.

As pressure builds on the iron ore miners dealing with a lower price for their product, it would be wise to expect a ramping up in demands from institutional investors for a clearer set of costs and revenue statements in the same way goldminers have been forced to reveal their ‘all-in’ costs rather than the ‘cash cost’ nonsense.

Aanother challenge emerging for the resources sector, and one that will hurt gas consumers in Sydney and Melbourne, is the recent failure of an important shale-gas test well in South Australia’s Cooper Basin.

The Holdfast No.2 well is the first horizontal test well in the Cooper’s shale beds and was expected to confirm the shale-gas potential in the region.

Its failure to perform as promised has raised doubts about future gas flows to major east coast markets, which are also facing the pressure of gas shortages as the new Queensland coal-seam LNG projects hunt for commissioning gas to get them started.