Rio Tinto is aiming to shift half its freight movements into the Pilbara from road to sea, after it backed the launch of a third shipping service into WA’s mining hub. 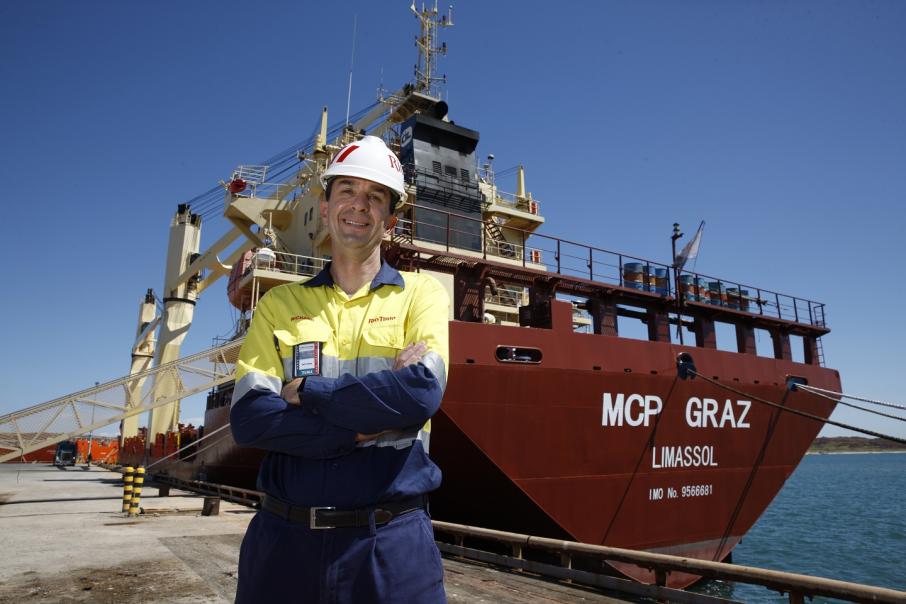 Richard Cohen at Dampier after the MCP Graz docked.

Rio Tinto is aiming to shift half its freight movements into the Pilbara from road to sea, after it backed the launch of a third shipping service into Western Australia’s mining hub.

Rio has partnered with Toll Group to launch the new service, with the vessel MCP Graz arriving at the Port of Dampier today.

The new services have been made possible by upgrades to cargo inspection and treatment processes at the Dampier and Port Hedland ports to meet Australian government biosecurity requirements.

The WA government has estimated these shipping services will replace 20 per cent of the current overland freight task to the Pilbara.

Rio Tinto, which is underwriting the Toll service, has a more ambitious goal.

“Over time, Rio Tinto is hopeful that more than 50 per cent of its freight requirements to the Pilbara will utilise this service, increasing the speed of delivery and lowering costs,” the company said today.

“It is an important breakthrough not only for our business, but it will also provide a great opportunity for the local Pilbara economy by helping to unlock small business growth and supporting job creation,” he said.

Rio expects the new service to reduce the lead-time for goods in to the Pilbara by six to 10 days compared with freight via Fremantle.

It is also expected to provide an annual saving of around three million litres of diesel fuel by reducing road train travel from Perth by more than 3.8 million kilometres.

Western Roads Federation chief executive Cam Dumesny acknowledged the shift to shipping would have an impact on his members.

“It will have some impact but they will adapt,” he said.

“They will still need to haul the cargo from the port to the mine sites.”

“Toll Group is heavily invested in the north of WA and is one of the largest employers in the Pilbara region,” he said.

“We are proud to be partnering with Rio Tinto on this landmark project which will provide businesses in the north with a significant opportunity to access international imports and exports.”

The vessel capacity on Toll’s new service will be 350 TEUs (twenty-foot equivalent containers) with Toll Global Forwarding and other freight forwarders offering a service for smaller volumes on the vessel.

Viva Energy, which supplies fuels and lubricants to Rio Tinto, said it expected to reduce its road transport travel by 350,000 kilometres a year through use of the new service.

The three new shipping services come 25 years after WA government-owned Stateships, which operated between Perth and the state’s north, was shut down.