Northern Star Resources’ Bill Beament is this year’s 40under40 First Amongst Equals, heading off strong competition from the three other finalists -Julie Shuttleworth, Steve Gostlow, and Phil Britten. 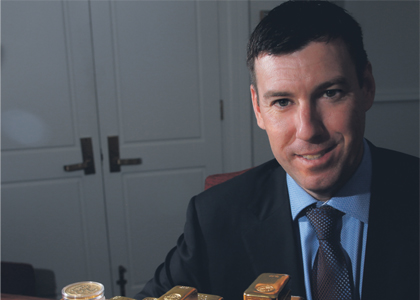 STAR: Bill Beament (above, at the Perth Mint) says he will never forget the people who have backed him. Photo: Bohdan Warchomij

Northern Star Resources’ Bill Beament is this year’s 40under40 First Amongst Equals, heading off strong competition from the three other finalists -Julie Shuttleworth, Steve Gostlow, and Phil Britten.

It was a laser beam that caught his eye, literally, as a 13 year old that started Bill Beament’s love affair with mining.

The Kalgoorlie School of Mines’ stand at a state government careers expo in Esperance grabbed the young Beament’s attention.

“I actually got hit by a survey laser beam, it hit me right in the face and that’s what drew me to the stand,” Mr Beament recalls.

“I was inquisitive and checked out what they did and what disciplines were there and fell in love with it.

“And from that point I made the decision that I wanted to get into the mining industry.”

Two decades later, Mr Beament had climbed to the top of the mining game when he joined Northern Star Resources as managing director in 2007. At that time the company was a greenfields explorer, as opposed to the successful gold miner it is today valued at more than $400 million.

It was the start to his corporate apprenticeship, Mr Beament said, with his life in mining up until that point including a rapid rise at underground mining contractor Barminco, where he was being groomed to take over from then chief executive Peter Bartlett.

Before that there were the ups and downs of starting up his mining contracting businesses. Ultimately, Mr Beament did not want to be a contractor all his life — he wanted to own mines.

The timing of his application for the Northern Star position was serendipitous — the board had wanted to try something different and Mr Beament, with his background in mining engineering, was the youngest person to apply for the job.

“I look back now and go ‘what the hell did I do that for’, a mining engineer going into a greenfields exploration company, they probably should’ve got another geologist,” he said.

“I remember the first day rocking up to the office and thinking, ‘what do I do?’ I had no idea”.

His engineering skills kicked in and he pared back the then four-year-old company’s assets and set about exploring the projects in a booming mining environment where geologists and drilling rigs were hard to come by.

A year after his appointment, however, the projects didn’t take shape, the financial support Mr Beament had counted on from major shareholder Jubilee Mines was gone following its purchase by Xstrata, and the stirrings of the GFC were starting.

“My wife and I would now joke about how I was the boss of a 1 cent company,” Mr Beament said.

In an uncertain economic environment, Mr Beament wound things back further at Northern Star a few months before Lehman Brothers collapsed, a move he believes saved the company from bankruptcy.

“It wasn’t a good time; no money, none of us was getting paid, we were selling-off assets, the only asset the company had was a bit of exploration gear, a couple of vehicles and an exploration hut in Halls Creek, and no-one wanted real estate back then,” he said.

In what looked like a low point in his career, it was a chat in the car park with then Northern Star director Peter Langworthy that Mr Beament credits as his career-defining moment.

At the time, Mr Beament was at a career crossroads. Northern Star was a shelf company with its shares valued at 1 cent, and Mr Beament was looking for a new challenge when director Michael Fotios approached him with a proposition to farm-in projects to the company.

Mr Beament was unsure about the proposal, and confided in Mr Langworthy about his dilemma.

“We were at the car park at the back of my office, and I told him I didn’t know what to do about the offer,” he said.

Those words resonated with Mr Beament, who went back to Mr Fotios with his own proposal — to find an asset that could demonstrate near-term cash flow within 18 to 24 months.

“We ended up not farming any projects from him and he actually backed me to buy an asset, and that’s when we bought Paulsens,” Mr Beament said.

The turnaround of the Paulsens gold mine has been dramatic, although it presented its own set of challenges to the young managing director.

The mine was not up for sale; rather Northern Star approached the owners who were going to close it.

A deal was made to buy the mine for $27 million, but with the gold price going up, the owners got cold feet not long after. After much persuasion, the final sale price of $40 million was agreed.

But with only $5,000 in reserves and the bank already committed to finance the original sale price, Mr Beament had to muscle up his negotiating skills to convince the bank the life of the mine was able to be extended.

In the end the bank agreed to back the $40 million deal, which many in the industry thought was too much, but Northern Star managed to pay back the full acquisition price in seven months.

While it was touch and go through the two and a half years prior to the Paulsens acquisition, Mr Beament said it was an important time in his career development.

“It was really an apprenticeship in the corporate arena. I was very fortunate to get that time and go through the hard yards,” he said.

“It makes you a lot better, a lot stronger.

“It’s helped me well and truly in my current role, even though we’re very successful now, but I never ever forget where I’ve come from, never forget the people who have backed me.”

This gratitude to his own mentors has evoked another of Mr Beament’s passions — fostering students and graduates through the mining education process, and making sure they get through the system.

He does this through his work with the School of Mines at Curtin University, where he has helped to implement a number of graduate and scholarship programs.

Ultimately, Mr Beament would like to own his own mine, and looks up to Jubilee’s founder Kerry Harmanis, Fortescue Metals Group’s Andrew Forrest, and Robert de Crespigny as inspiration for his long-term ambitions.

“I eventually want to own my own mines and be like a Kerry Harmanis-type scenario. I want to own 20-30 per cent, same as Andrew Forrest, that’s where I want to be.”