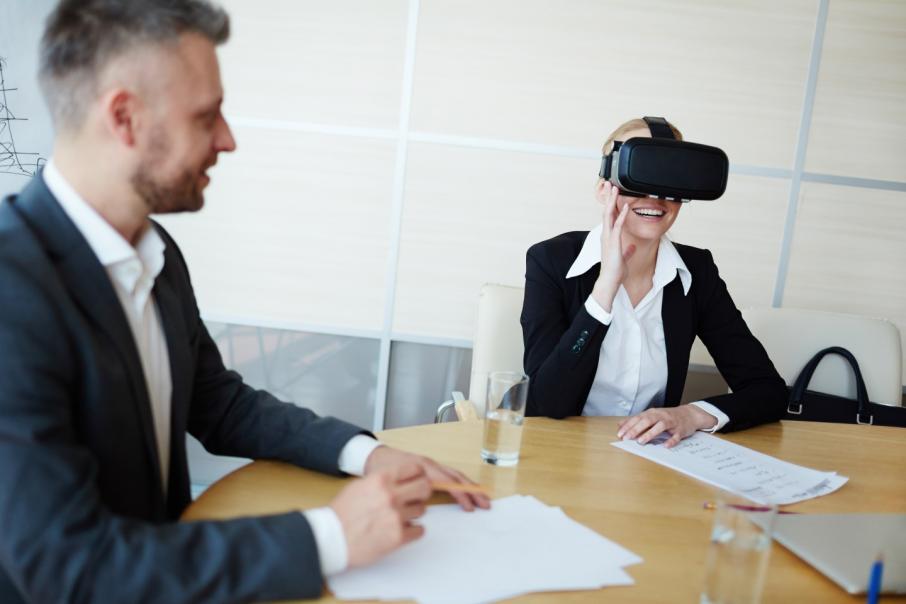 VR meetings and seminars are an alternative to video streaming. Photo: Stockphoto

Overcoming short-term challenges about how we do our jobs can lead to substantial shifts in workplace culture.

"When nothing is sure, everything is possible,” English novelist Margaret Drabble wrote in her 1980 novel The Middle Ground.

Now, four decades later, those words still ring true. Indeed, this is exactly the kind of thinking we need right at this moment.

It hasn’t been thrust on us by artificial intelligence and automation, but something entirely unexpected and unprecedented. For the near future, we’re all remote, flexible workers.

With that comes the opportunity to rethink and redesign what wasn’t functioning, to create a new way of living and working that is balanced, inclusive and truly diverse.

The current configuration of work isn’t a good fit for many people, especially women.

With female participation in the tech sector between 10 and 26 per cent (depending on whose statistics you go by), the industry is a microcosm of the larger problems faced by women in the workforce.

Not only do few females go into tech, the industry also has double the turnover rate for women than men, according to the US-based National Center for Women & Information Technology.

Work-life balance (or lack thereof) is one of the core reasons women leave the tech industry, according to a 2019 IT Professionals Australia report entitled ‘Tech’s Woman Problem’.

According to the report, 38 per cent of those surveyed planned to leave their profession within the next five years because of this lack of balance.

The report also outlines how wage ‘scarring’ means women are financially disadvantaged for taking a career break to have children, because they miss out on annual pay rises in the years before, during, and after the break.

This indicates that the way we design and develop technology needs a complete rethink, so the work can be performed in a much more flexible way, opening the doors to a more diverse workforce in the tech sector.

Taking a broader perspective, the tech industry is also critical in shaping the future for us all.

So it is critical those creating that future match the demographics of who will be affected by those design choices.

As a thought experiment, how might Facebook or Google or Uber or Amazon be different if created by a diverse team of 50 per cent women rather than 10 per cent?

The future of work, at least for the near future, is remote, flexible and virtual. Incidentally, this way of working is also more accessible for women and people with families.

So what if we used the opportunity to make this sort of working the norm, rather than the exception?

We could use it as a stepping-stone to see some of the possibilities and experiment and redesign how we work.

One such innovation is using virtual reality for conferences and events. Most of the discussion I’ve seen so far about taking events and conferences online is with streaming video, for example with Zoom or Skype.

But 2D video can be quite limiting and doesn’t offer the same human connection as the real world, especially the magic that can happen from bumping into people at networking events.

VR takes online conferences to the next level. Imagine putting on a VR headset and being transported to another space, where you can move around and interact and chat with other people and watch shared events together.

which allows event organisers to run their events entirely in shared 3D spaces, using VR. Event attendees can watch keynotes together, and then hang out and chat in shared networking spaces. I’ve also started offering my keynotes entirely in VR.

It’s the next best thing to being there, without the travel and the health risks.

HTC, one of the biggest manufacturers of VR hardware, was one of the first to run an entirely VR conference in early March, offering a proof-of-concept that virtual conferencing offers a compelling alternative to video streaming.

The future is diverse

These VR events are more accessible for people who find it difficult to travel for a variety of reasons, in addition to a global pandemic. For example, women, people with families, those with health issues, and older people who may have challenges getting health insurance.

The same technology can also be used to improve collaboration across remote teams.

The last time we faced something as transformative as COVID-19 was probably World War II, which also involved a massive shift in women’s participation in the workforce.

What previously seemed impossible and incomprehensible – that women would be allowed to do what was previously considered men’s work – became the new reality.

What sort of new reality could we create today?