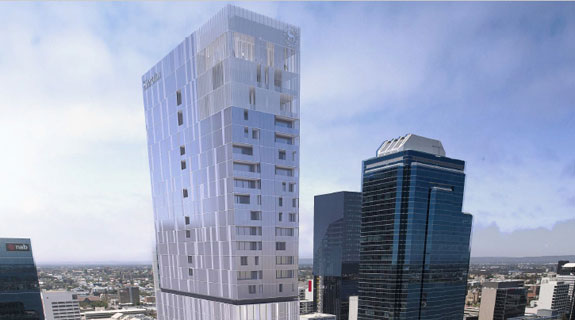 International hotel group Sheraton is plotting a return to Perth, with plans lodged to build a new hotel on The New Esplanade Hotel site in the CBD.

According to City of Perth development assessment panel documents, the 42-storey new Sheraton, designed by architecture firm HASSELL, would also incorporate 89 apartments along with 196 hotel rooms.

The proposal will be assessed tomorrow by the DAP, with City of Perth officers recommending it be approved.

According to City of Perth documents, it will have a base construction cost of $110 million, not including cost of internal fit-outs.

The New Esplanade Hotel site is owned by H & M Capital Pty Ltd, an entity owned by the Tan family, which purchased the building in 2011 for $23.5 million.

Sheraton exited the Perth market with its main brand in 2010, when it sold its lease on its 486-room hotel on Adelaide Terrace to Singapore’s Pan Pacific Group.

Since purchasing the lease, Pan Pacific has spent around $4 million refurbishing the hotel.

Sheraton still operates in Perth under its four-star brand, Four Points by Sheraton, across the road from Perth Arena, but it is not alone as a major international group seeking to join the Perth hotels boom.

Construction is expected to commence within the next four months on a Ritz-Carlton hotel at Elizabeth Quay, while last year BGC Development started building a Westin Hotel at the former FESA headquarters at 480 Hay Street.

Building will begin in coming months on Courtyard by Marriott hotel on Wellington Street, opposite Kings Square, while Accor Group plans an M Gallery hotel at Leighton Beach, a project which was formerly proposed to be a Hyatt Place.

Both of those hotels will be built using modular methods developed by CIMC Modular Building Systems.

Hilton is also in the middle of a major Perth expansion, with three Doubletree by Hilton proposals in the works, at Fremantle, Northbridge and Barrack Square.

Construction has started on the Northbridge Doubletree, with Barrack Square expected to kick off later this year.

At Fremantle, developer SKS Group has sought to extend the approval for the hotel for two years after long-running talks with the City of Fremantle over the hotel's design ended in an impasse. An architect's rendering by HASSELL of the new Sheraton proposal.