Shell’s Prelude FLNG project will feature a sizeable local contingent of workers after a recent agreement with a WA training organisation. 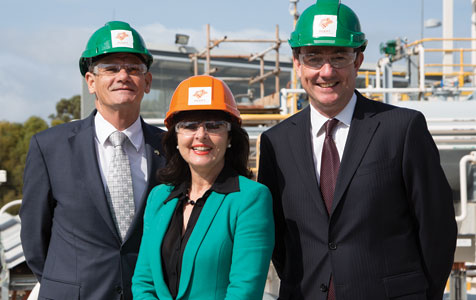 Shell's Prelude FLNG project will feature a sizeable local contingent of workers after a recent agreement with a WA training organisation.

Shell Australia has sought to counter criticism its Prelude floating liquid natural gas facility will mean fewer jobs for Australians with the announcement of a Perth-based training partnership and Western Australia-specific contracts.

Shell and Challenger Institute of Technology have finalised a four-year partnership to develop training programs for technicians who will operate and maintain Prelude.

The partnership, based at Challenger’s Australian Centre for Energy and Process Training (ACEPT) at the Australian Marine Complex, will train 200 technicians working in production, mechanical, instrument-electrical and service areas, starting next year.

Shell also announced that it would sign 200 contracts to support Prelude. With an estimated $200 million in annual operating costs, 70 per cent, or $140 million in the first year, would go towards contracts to be carried out in Australia, Shell said.

It also specified that 70 per cent of Prelude’s Australian contracts, equal to $98 million in the first year, will be given to Western Australian businesses. The contracts will range from marine logistics, aviation and freight services, to operations and production.

Perth-based Decmil recently won a $25 million contract with Shell to design and construct the onshore facility in Darwin, which acts as the main logistics support base for Prelude.

Shell has previously said its project, which will be the first FLNG project in Australia, will bring benefits to Australia of $45 billion over its 25-year life, including $12 billion paid in tax and an equal amount to be spent acquiring local goods and services.

It has already recruited a number of process and maintenance technicians for Prelude’s operations phase, to start work in 2016 once the FLNG project is built in the east Browse Basin.

Shell anticipates the project will hire a total of 350 staff and require 650 contractors, with its next recruitment process to ramp up in the coming 18 months, using an Australia-first strategy.

The recruitment will target people with skills in production and maintenance, engineering, wells, contracts, and procurement and support services.

Shell Australia expects to double its workforce in WA during the next five years and will move to a new corporate headquarters in Perth’s Kings Square development in mid 2015.

In 2011, when it announced the intention to partner with WA institutions, Shell also said it would work with Curtin University to establish the Global Centre for FLNG Learning and Research.

A Curtin University spokeswoman said research associated with offshore LNG production was continuing as part of a developing partnership between Curtin and Shell Global.