Shell Australia boss Andrew Smith has defended his company's decision to walk away from an onshore gas development at James Price Point at an at-times heated parliamentary committee inquiry. 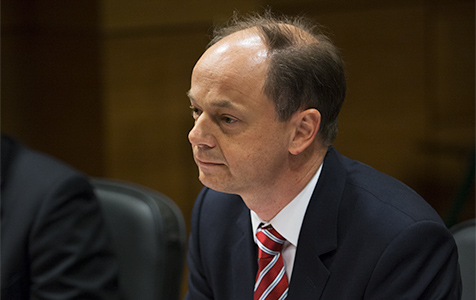 Shell Australia boss Andrew Smith has defended his company's decision to walk away from an onshore gas development at James Price Point at an at-times heated parliamentary committee inquiry.

"Our view is that the James Price Point onshore development was not economic," Mr Smith said.

The inquiry has been established to identify the impact of floating LNG on state revenue and on various sectors of the WA economy.

Committee member Fran Logan is reported to have told the inquiry earlier this week that a submission from an unnamed major oil and gas company had put the difference in the rate of return between the onshore and offshore Browse development options at about 1 per cent.

Mr Smith told the inquiry today that Shell did not recognise figures that had been circulated regarding the economics of an onshore development but declined to elaborate on its own figures, citing commercial sensitivity.

He also refused to put a number on how many workers would have been employed in the construction off an onshore gas processing hub at James Price Point.

Premier Colin Barnett had pushed to keep the Browse project onshore, arguing this would ensure the creation of more local jobs. However the Woodside-led Browse joint venture announced in September that it had chosen to develop the project using floating LNG technology.

Mr Smith said Woodside had spent about $2 billion over four years trying to make the Browse onshore development work and had come to the conclusion that the project was not viable.

He said the Browse joint venture partners, including Shell, Mitsui, Mitsubishi, PetroChina and BP, had each come to the same conclusion based on their own independent research.

Shell Australia general manager upstream, Steve Phimister, said about 10 per cent of the 1,000 workers set to be directly or indirectly employed at the Prelude development would be sourced from overseas, with most of these workers brought in for specialist maintenance jobs.

Shell also defended the company's decision to commission an onshore supply base in Darwin rather than at Broome.

Broome Port Authority earlier this month secured $24.1 million in Royalties for Regions funding to refurbish and extend the life of its 47-year-old wharf.

Mr Smith is expected to disclose commercially sensitive information at a closed session held by the committee.