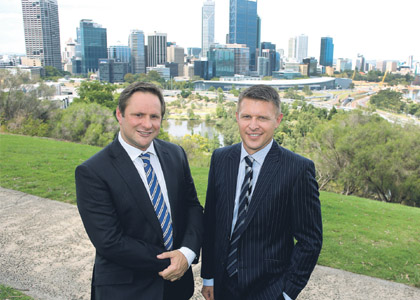 Sheffield said it had been appointed by listed Perth property player Aspen Group to handle the leasing in one of its prime assets, Septimus Row Square on Adelaide Terrace.

Mr Clapham, who has quit as Brookfield Office Properties head of commercial leasing for Australia and New Zealand, has become a partner in the business with founder Digby Sutherland.

The pair worked with each other at CB Richard Ellis in Sydney. Mr Sutherland returned to Perth some years ago and established Sheffield more than five years ago. Mr Clapham has been resident in Perth for a little over a year, having relocated to oversee the leasing of major Brookfield assets Brookfield Place, BHP Billiton’s new Perth headquarters, and 108 St Georges Terrace, previously BankWest tower.

Sheffield is offering a new leasing alternative to the handful of national agencies that dominate the market.

Mr Clapham said the major agencies were not focused on leasing; they simply included it in a broad range of services from valuations to asset management and real estate sales.

“We are offering something that is completely independent, we don’t come with any conflicts,” he said.

To date, Sheffield has been focused on the precommitment leasing of new office developments.

Mr Sutherland said Western Australia had undergone significant growth in the CBD, and the continuing demand for office space opened up room for specialist leasing agencies to operate. Such boutiques were more prevalent in bigger markets such as Sydney.

He said no other market in Australia was witnessing the level of activity in Perth, where several state-backed developments - CityLink, Elizabeth Quay and Riverside - were driving the property sector and creating interest from institutional and sovereign wealth investors.

On the client side, demand from oil and gas companies had put a floor in the market, he said.