Sharpening the benefits of diversity

Businesses need to build an environment that enables work teams to balance integration with differentiation. 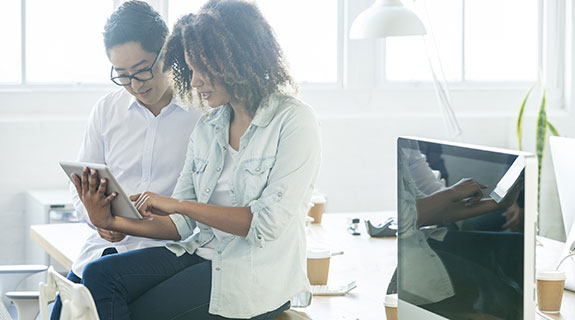 Businesses can thrive when they get the best out of each individual in the workplace. Photo: iStockphoto/Courtney Keating

Businesses need to build an environment that enables work teams to balance integration with differentiation.

Australia is experiencing an influx of skilled workers from overseas – and we are not alone.

Organisations of all types continue to struggle with the increased cultural diversity that coincides with such an influx of workers, with integration an often-touted solution to this issue.

Formally defined, integration is an act or instance of incorporating or combining into a single whole. Yet in practice, integration can mean that workers are forced to leave behind their culture of origin, and feel compelled to take on the culture they join. This may not be optimal, or in fact, even desirable.

However a research program I undertook in collaboration with Aida Hjaro (Vienna University of Economics and Business) and Markus Pudelko (Tuebingen University, Germany) has shown a number of alternative solutions for today’s diverse organisations.

Across demographic groups, however, there can be vast differences, and collisions can occur when attempts are made to combine work efforts inside a single workplace. Hence, there is pressure to integrate, to create conformity and alignment of thought and action across diverse members.

Paradoxically, most organisations actually want and need the diversity of skills, views, and ideas that diversity brings in order to innovate and remain competitive. Many organisations use diverse teams so that members with different nationalities can exchange their unique knowledge in order to capture market share in new locations, exceed competitors’ customer service, secure local resources, or implement successful distribution in emerging economies.

But these teams often fail to makes use of the diversity they contain because of the pressure for sameness that often occurs when organisations focus on integration.

For example, corporate policies designed to create equality among employees may mean that, in an effort to maintain harmony and acculturate members, diverse knowledge never surfaces.

To encourage real innovation, organisations need to build an environment that enables work teams to balance integration with differentiation. It is only when this occurs that the benefits of diversity can be reaped and innovation can occur.

Our research team analysed data from 11 organisations in a variety of industries, including oil and gas, chemical and pharmaceuticals, banking, electronics, engineering, and construction. Through comprehensive interviews with workers, leaders, and human resources professionals, as well as observations and analysis of company documents, we found three types of climates for diversity – policy focused, awareness focused, and engagement focused.

Policy-focused climates are characterised by a concern for diversity primarily from a policy perspective. Policies and norms require all employees to assimilate to the dominant organisational culture. For example, the codes of conduct contain written non-negotiable principles, including standardised diversity practices. The main emphasis is on conformity. As a result, minorities are expected to decrease the significance of their culture of origin in an attempt to conform to corporate norms.

Awareness-focused climates chiefly use diversity for access and legitimacy in new markets, but diversity is not reflected in core work processes. A strong belief in cooperation and harmonious interactions exists as means to facilitate cross-cultural interaction.

Importantly, neither policy-focused nor awareness-focused climates result in a healthy dynamic of open debate within work teams. There is little exchange of perspectives, information, and know-how, and members rarely share their views and priorities plainly and explicitly. As a result the teams in these organisations are less effective.

Shift the focus to engagement

It is only in the third type of diversity climate that diverse teams flourish. Engagement-focused climates use diversity to inform and enhance work processes based on an assumption that cultural differences give rise to different insights. A limited set of core values considered central to the organisation are emphasised, but otherwise, differences are allowed to flourish.

These organisations encourage the voicing of country-specific values and openly address cultural peculiarities and uniqueness. Discussions incorporate mutual respect and a willingness to rethink, revisit and learn from each other. As a result, members demonstrate interest in maintaining their culture of origin but also in learning about other cultures.

Importantly, the knowledge exchange is conducive to innovation, enabling the teams to reap the benefits of their diversity as well as develop healthy relationships and stay on track with shared goals and effort.

This translates into the ability of teams to accomplish their objectives, whether those pertain to staying on budget, meeting clients’ needs, reaching contractual targets, or developing new services.

This research indicates that not all integration strategies are created equal in the workplace. Only those that encourage engagement, allowing for integration to be balanced with differentiation, are likely to achieve the objectives of 21st century organisations.

• Cristina Gibson is a professor at the UWA Business School, with a focus on increasing wellbeing and effectiveness across cultures.