Developing along Perth’s coastline has traditionally been one of the biggest challenges in WA property, but a new wave of projects promises to change the status quo. 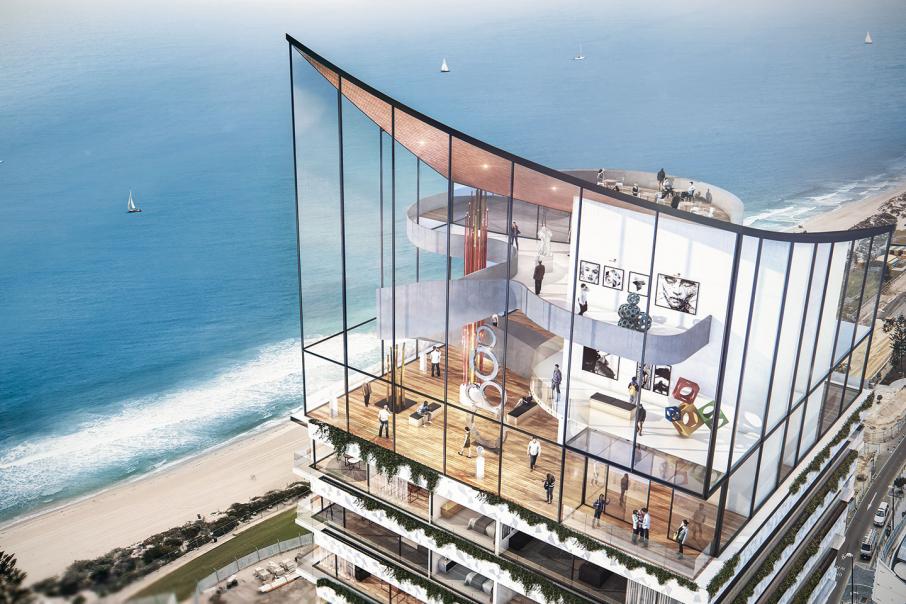 Developers believe they have found the key to solving one of the biggest dilemmas in Perth property – providing residential options for those who want to move near the beach without upsetting the locals.

The answer, it seems, is to engage early.

A new wave of coastal developments is emerging across the metropolitan area, from Ocean Reef in the north to Rockingham in the south, ranging from major apartment towers to full-blown marina facilities.

A common thread across these projects, some of which are still in the approvals phase, is that proponents have been on the front foot in efforts to share the benefits of their vision with the community.

Speaking at a recent Property Council of Australia event, City of Joondalup chief executive Garry Hunt said involving the local community had made a significant impact on the makeup of the $800 million Ocean Reef Marina, a project first proposed more than 30 years ago. 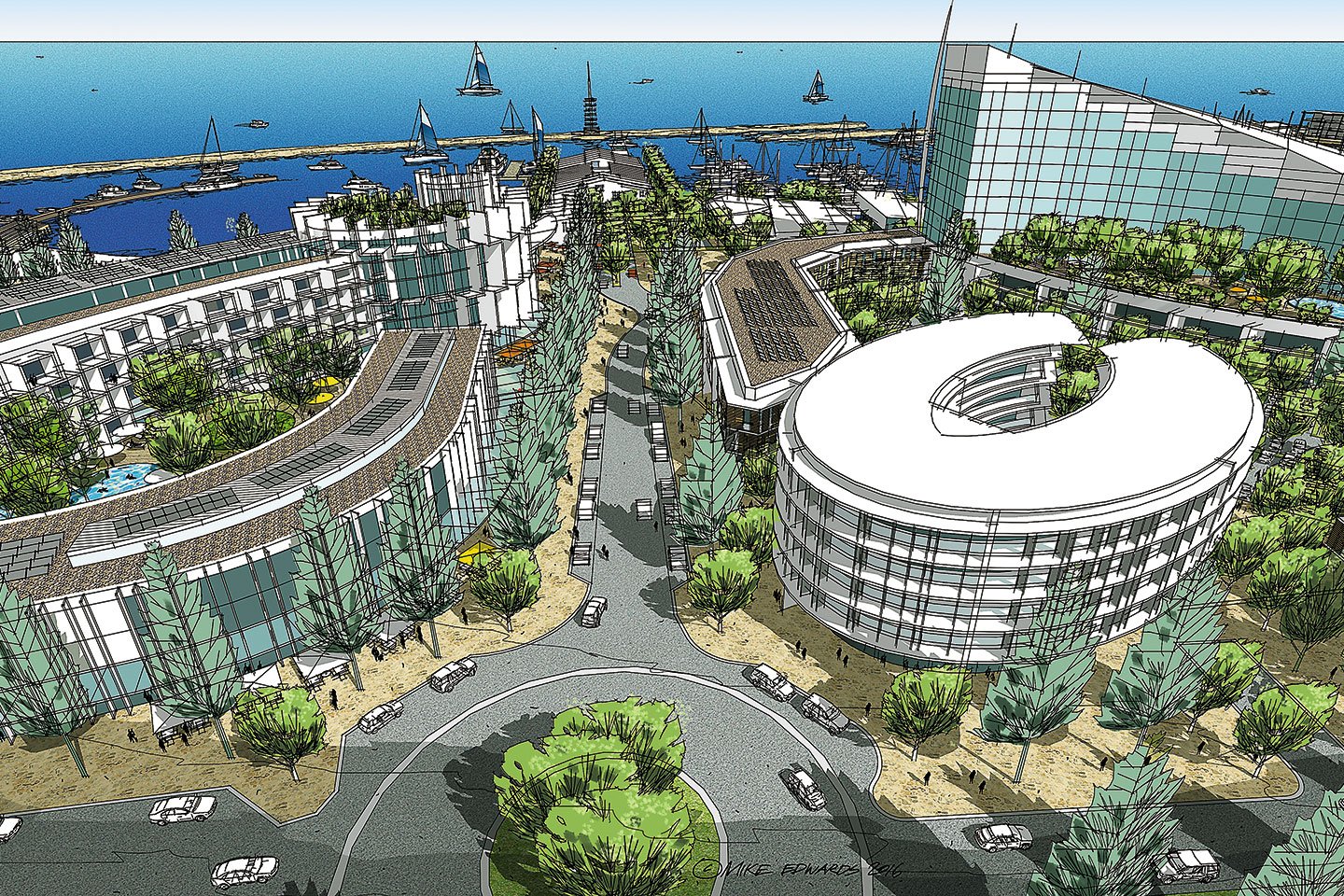 The Ocean Reef Marina concept was heavily influenced by the local community.

“We very early on decided that the only way for this project to progress was the make sure the community was with us,” Mr Hunt said.

To bring the community along, Mr Hunt said a 35-person community reference group was established, including local residents, businesses and recreational clubs, in addition to a steering committee featuring representatives from relevant local and state government agencies.

Following that consultation, Mr Hunt said the City of Joondalup determined that the marina should have a significant residential component, a feature not included in the initial plans.

The City of Joondalup’s vision at Ocean Reef now includes up to 1,000 dwellings, with buildings restricted to nine storeys.

And while building at height along the coast has long been a prickly proposition, Mr Hunt said community surveys showed 93.9 per cent of more than 11,000 respondents supported the project.

Mr Hunt said another key element of the project to arise from the community engagement process was the setting aside of a significant portion of Bush Forever land, which minimised any environmental protests over the proposal.

The other big takeaway from the engagement, Mr Hunt said, was to ensure the public had access to the entire development.

“That was fundamentally important; you can get away with lots of things with the community, providing they can get access and there isn’t the ability for someone to claim that the silvertails have got access to something that ‘Joe Public’ can’t get access to,” he said.

However, the proponent of another marina development, Cedar Woods Properties, has not enjoyed the same level of community acceptance for its Mangles Bay plan near Rockingham.

Since Cedar Woods unveiled its vision for Mangles Bay in 2010, there have been sustained community-based protests against the plan to create a marina and canals estate on the 75-hectare parcel of land.

Another marina development, known as Port Rockingham and located north of the Rockingham town centre at Wanliss Street, has gained wider acceptance, and will likely go ahead in coming months, after a development application was lodged earlier this year.

Back up the coast at Scarborough, 3 Oceans Property adopted a similar strategy to that taken by the City of Joondalup, by recognising the importance of sharing its vision with the locals before any plans were lodged for approval.

“When it came to designing our development, we didn’t presume to know what the Scarborough community wanted,” 3 Oceans managing director Dyno Zhang said at the Property Council event.

“Instead, we took our concept to the community and key stakeholders and asked for their input.”

Following that consultation, Mr Zhang said the decision was made to provide a 4,000 square metre public plaza, a minimum of 350 publicly accessible car bays and an observation deck on the 40th floor of one of the towers, with room for an art gallery and a restaurant or bar.

The developer has also proposed a system designed to give the Scarborough area a boost during the project’s construction – setting up a discount mechanism to funnel construction workers, of whom there could be up to 2,500, into local area businesses.

Mr Zhang said those commitments, as well as a proposed pedestrian bridge to make it easier to cross the busy West Coast Highway, resulted in almost unanimous support for the project, and very little consternation over the proposal’s 40-plus storeys in height.

“The height of the tower was not a major issue for most people,” Mr Zhang said.

“In fact, 80 per cent of survey respondents said they supported our proposal, and the majority of people at our workshops were keen to support the development’s height and scale, due to its design excellence and considerable public benefits.

While 3 Oceans was able to navigate around the issue of height at Scarborough, Rowe Group managing director Greg Rowe said he had encountered significant challenges in gaining community acceptance of a six-storey proposal on West Coast Drive in Sorrento.

Mr Rowe said the misconception that the proposal, which he worked on for developer Parcel Property, was a high-rise development, despite its modest size, was something the planning firm had to deal with on a regular basis since the project was first proposed five years ago. 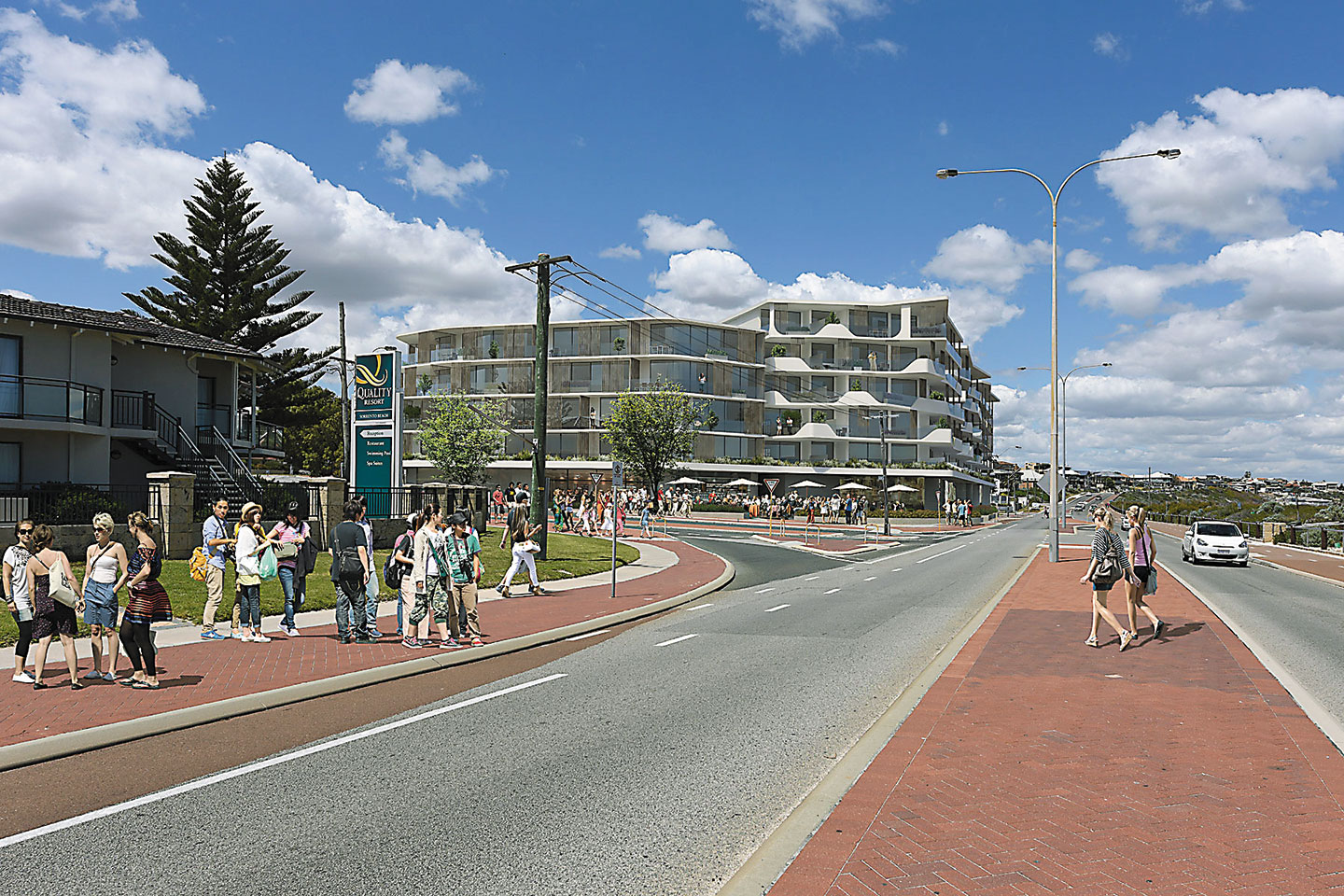 “The local and somewhat extended residential community took a view on the development, and it was a contrary view in terms of our aspirations and our client’s proposal,” Mr Rowe said.

“We then had to spend a considerable amount of time going through the process of trying to engage with the community, fending off some of the criticism that was levelled at the proposal.”

Mr Rowe said he didn’t believe height was the real issue with the Sorrento Plaza proposal, but instead referred to it as the manifested issue.

“If there’s a notion that the community might not want a development, and there aren’t many good reasons to oppose it, height gets played as the card,” Mr Rowe told Business News.

“Yet there is really not any reason to be perturbed by height if it’s dealt with well.

“Once you get to a certain height, it’s almost a discussion not worth having past that point, as to whether or not there is any effect on the ground floor or the nearby community.

“But it’s a common and unfortunate chestnut that gets rolled out a fair bit for us.”

Property Council of Australia WA president Tanya Trevisan said an interesting element of coastal development was the desire for renewal on the part of many local residents.

“The classic model we’ve had in Perth for decades now is to put acres of asphalt on our beachfront to facilitate public parking,” Ms Trevisan told Business News.

“It’s pretty seasonal, in terms of the demand there in those car park areas, and it’s just an absolute waste when you’ve got this extremely, not only valuable but valued real estate, which should have activity on it.

“When you actually put in a much greater level of amenity, especially proper mixed use where you get apartments that generate activity on the street front at pedestrian level and you’re getting really great cafes for example, I think people will embrace it.

“You see that with the new coastal restaurants that we’ve got at Leighton Beach, Swanbourne or City Beach, they are always packed – try and get in there on a Friday or Saturday night and it’s impossible.

“That’s just a classic example of the kind of pent-up demand – people want to be engaged with their beachfront and they want to do it all year round.

“The public has never been offered an alternative, but once we see these sophisticated beachfront developments take place the public will get used to a higher level of amenity and they’ll embrace it.”

Fratelle Group director Kylee Schoonens had a similar view to Ms Trevisan, saying the current wave of projects would be just the beginning for coastal development.

“If we don’t allow this in key strategic areas within the metropolitan area, we are going to continue the urban sprawl,” Ms Schoonens said.

“Everybody wants to live by the beach, so we need to be able to look at how we do that with other sites in the future.”