A PERTH charity has demonstrated it's not how much you have that counts, it's what you do with it. 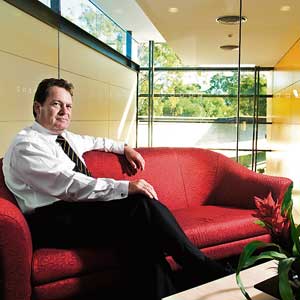 A PERTH charity has demonstrated it's not how much you have that counts, it's what you do with it.

The Western Australian Internet Association (WAIA) provided CFWA with $5,000 last August, which the charity has used to launch a specially designed information portal for those affected by cystic fibrosis.

CFWA chief executive Nigel Barker said the website was a one-stop-shop for those seeking information about living with the disease.

"One of the things that we really wanted to do was provide people with access to the latest research," Mr Barker told WA Business News.

"Secondly, it provides a communication network with other people who have CF so that they can share their experiences, and you know a problem shared is a problem halved."

The grant was part of $20,000 invested annually in community projects by the WAIA.

"We appreciate that the industry has the opportunity to give something back to the community, so we decided to create a series of community grants which help organisations to make use of the internet," WAIA president Richard Bone said.

"We felt that the internet was an ideal medium by which we can assist this group of people.

"It's unfortunate we don't have huge amounts of money to give to these projects because they are very worthwhile.

"Fortunately the money we have given [CFWA] has given them a bit of jump-start to get their online presence together."

Mr Barker said despite the shortcomings of a small budget, the portal was developed through the collaboration of the WAIA and web developer aussiehome.com.

"It's been done on the smell of an oily rag. I have to say that we did receive quotations up around the $50,000 mark to get this far, yet the guys at aussiehome.com have actually done it all as a special favour to CFWA," he said.

"It's one of those wonderful situations where a small amount of seed finance from the WA Internet Association has been leveraged by the not-for-profit society.

"When Sir Charles Court was alive he said to me, 'Nigel, if you could leverage a dollar in a commercial organisation the way that you guys do it in the not for profits, we wouldn't have any problems in Australia.'"

"There are various charities and other things that we support, this was something I saw that was right up our street," he said.

"We got paid for our time, so I don't want to go over the top in what we did, but I think it would have been virtually impossible to have walked into a web designer off the street and said 'build this.'"

In the development stages of the model, Mr Barker said, it was recognised the framework could be applied to other diseases and disorders.

"We took it to the health department as well and everybody we showed it to said it was fantastic and could be used for other diseases, not just cystic fibrosis,'" he said.

With that in mind, Mr Barker said CFWA intended to share the portal design with other CF associations across Australia.

"They've been part of the development process and they can't wait to get their hands on it," he said.

"Everyone's really excited about it. Once we've ironed it out, refined it and spent a little bit more time and money on its development, we'll then be happy to give access to it to the other associations."