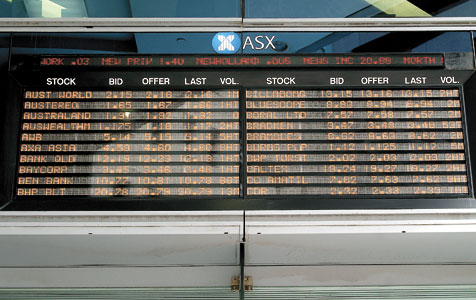 Share ownership among adult Australians declined from 43 per cent to 38 per cent during the past two years, a 2012 Australian Securities Exchange study shows.

These figures remain much lower than the 55 per cent pre-GFC figure measured by the Australian Securities Exchange (ASX) in 2004.

The study, conducted every two years, measured both direct share ownership and indirect ownership via unlisted managed funds by sampling a random group of 2,000 adult Australians via telephone surveys.

Investor confidence also fell sharply, with 42 per cent of respondents saying they planned to buy shares in the short term, down from 62 per cent in 2010.

ASX said that, despite the overall decline, 43 per cent of people surveyed believed it was a good time to hold on to shares.

Other positive news included an increase in the average number of shares traded per person to 22 in 2012, up from 15 in 2010.

Share ownership also remained the preferred asset for personal investment at 34 per cent, beating out residential property at 22 per cent and other listed investments at 3 per cent.

Other statistics provided details about people who invested in shares.

For example the ‘typical’ share owner in 2012 was a tertiary educated male who predominantly traded through an online broker.

The study also showed a large gender gap in share ownership, with 40 per cent of males directly investing in shares compared to 28 per cent of women.

The likelihood of share ownership also increased as people aged, peaking at between 65 to 74 years.

Financial planners and advisers were the most common source of advice to investors at 18 per cent, followed closely by family and friends at 14 per cent and newspapers at 12 per cent.

The ASX study also showed that 65 per cent of people used an online retail broker to purchase shares in 2012 compared to 52 per cent in 2010.