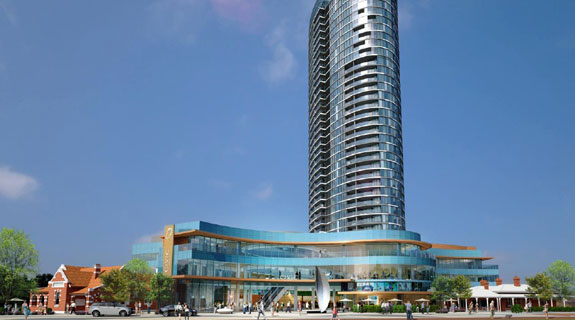 Apartments developer Finbar Group has taken just one week to sell 51 of the nearly 300 apartments on offer at its Civic Heart project in South Perth.

The sales have a total value of $61.2 million, taking Finbar’s collective pre-sale contracts across its portfolio to more than $480 million.

The 38-storey tower, which will also include a three-level shopping centre called Civic Mall,is expected to become Perth’s largest building outside of the CBD.

Finbar managing director Darren Pateman said most of the buyers were locals, an indication that the Perth market had embraced the developer’s vision for the project.

“We have one-bedroom apartments that have been purchased by investors and first home buyers who have secured a South Perth property with the best facilities on offer, and we have more mature buyers who have purchased 200 square metre skyhomes,” Mr Pateman said.

“The diverse product mix and occupant mix will all add to the vibrancy that we are trying to create with Civic Heart.”

The sales, which put the developer on track to begin construction on Civic Heart next year, are also indicative of the appetite for apartments in South Perth.

Earlier this year, Finbar sold 61 per cent of the 118 apartments on offer at its nearby Aurelia project in the first weekend, while Civic Heart has received more than 1,000 registrations of interest to date.

Chief operations officer Ronald Chan said owner occupiers seeking to upgrade their existing homes made up the largest proportion of the group’s buyers.

Mr Chan said 29.5 per cent of residents in South Perth owner their own properties outright, giving them the equity to upgrade and not overcommit financially.

“Furthermore, there is 46 per cent of the population renting in the area and hence investors can also be confident of securing tenants for their properties,” he said.

The Norwood development comprises 59 apartments, with 48 having been sold.

Finbar is expecting sales revenue from Norwood to contribute to its earnings in the current financial year.