A Swedish construction giant will focus on the health and wellbeing of future residents as it rolls out its first development in WA. 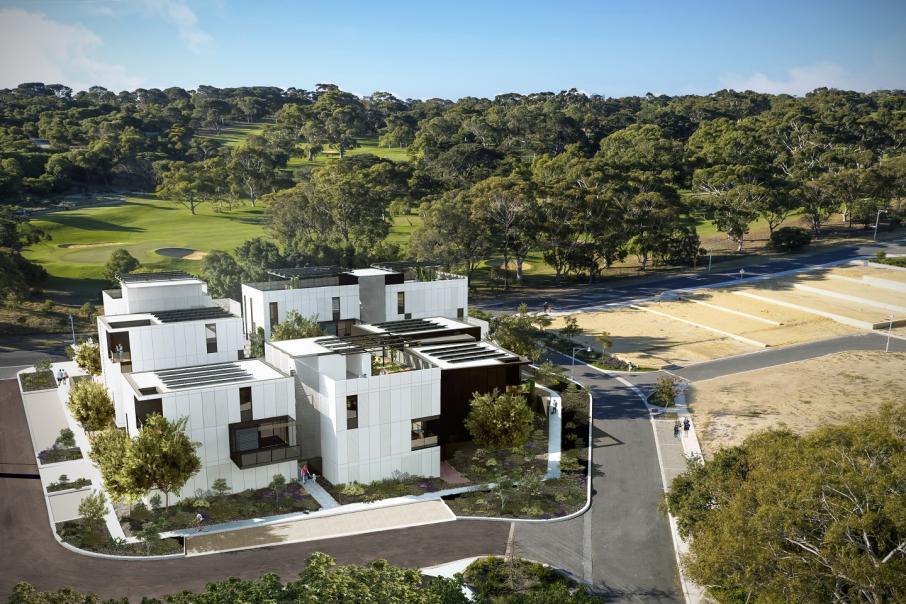 Serneke and LandCorp have worked with Fremantle’s Spaceagency on the design of the WGV Baugruppe. Image: Spaceagency

Serneke, which merged with local building company Consortium Builders as the first step in a wider international expansion, will build an 18-dwelling development on a 2,000 square metre lot at LandCorp’s WGV precinct, utilising a German design process known as Baugruppe, or building group.

Serneke Australia managing director Ander Abercromby said the WGV development would comprise four blocks of paired buildings, which would each be three storeys.

“It’s almost the ideal project for us to commence in Perth, because it represents everything that we’re aiming to do,” Mr Abercromby told Business News.

“It’s a project that’s absolutely committed to environmental and social sustainability at the highest levels, modern methods of construction, it’s got a really good social model linked with it, it addresses the missing middle of medium-density development, and it’s in a great receptive location in the City of Fremantle.

“It’s got everything going for it.”

Mr Abercromby said a development application had been submitted for the build, and pending relevant approvals, Serneke was gearing up for a construction start in July.

Serneke has been working with Fremantle-based architecture firm Spaceagency on the overall design of the project, which LandCorp is using to demonstrate new levels of environmental and social sustainability.

“There is no question that LandCorp sees this as a demonstration project and what they most want to achieve from it is to produce something that is commercially replicable, and that’s one of the things that has us most interested too,” Mr Abercromby said.

“In fact, we are working with others at the moment to do exactly that, including the Department of Communities, which currently has a call out for people to join a medium density development panel, very much in line with the sort of thing that the Baugruppe is addressing.”

In Sweden, Serneke is one of the leaders in prefabricated construction techniques – a building methodology Mr Abercromby said was gaining in popularity in WA.

“What’s really interesting at the moment is we are rapidly approaching a tipping point where there are suppliers who are setting up facilities that allow us to make some pretty strategic alliances and outsource offsite to pre-fabricate and bring really high-quality elements to site, which allows you to build really quickly and more accurately, which leads to more energy efficient buildings,” Mr Abercromby told Business News.

“Some of the people that are doing that are Wesbeam with their LVL plant in Neerabup, a new company called Offsite in Kewdale, who are just at the moment commissioning a new facility that will be a world-class automated framing line, and we are hoping to use them for the Baugruppe project.

“Our job is to be aware of what’s out there and what the state of the art is locally, the potential to import things from over east, but ideally what’s happening locally, and there is a lot going on at the moment, it’s really exciting.”

Mr Abercromby said the development would have a strong focus not only on environmental sustainability, but also demonstrate a commitment to the health and wellbeing of its residents.

“In terms of carbon and energy usage, you can be as careful as you like in the construction, but the materials in the construction phase only represent 20 to 30 per cent of the life cycle carbon footprint of a building,” he said.

“The other part of it is the social sustainability, that’s something where the Swedes are way ahead of our thinking here in Australia.

“They are really keen not just to build good buildings, but they know that they are going to have an effect long term on the people who live in those buildings.

“Therefore it is important that just the whole way they are structured, designed, and that builds quality living spaces.

“That can be designed in from the outset by engaging the right sort of people who understand that.