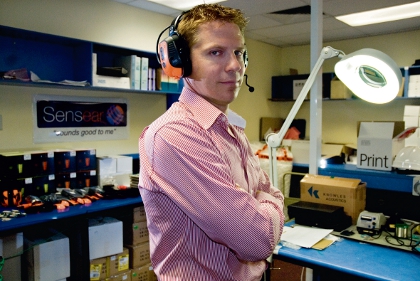 A Perth technology company has signed an exclusive deal with US giant Motorola to design cutting edge headsets for international markets.

The partnership deal will provide new headsets for use in high-noise environments, such as in the mining and heavy industries.

Sensear, which has been in operation for seven years, will design Bluetooth noise-cancelling headsets and two-way radios with Motorola.

Sensear managing director Justin Miller said it was “a major win for us and a huge boost to our credibility as the world leader in communication headsets”.

Under the deal, the jointly designed headset, XBT, will be used in Motorola’s Bluetooth enabled two-way radios.

Technology developed by Sensear separates harmful background noise from voice to allow both face-to-face and remote communication in loud environments while still enabling operators to be aware of their surroundings.

Its products are aimed at the resources and manufacturing sector, which for safety and productivity reasons need to be able to clearly understand conversations.

Motorola is a communications giant which specialises in communication infrastructure, devices, software and services and reported $US8.7 billion in sales in 2012. Motorola estimates there are more than 40 million two-way radios deployed across the globe, with a trend of replacing analogue radios with digital ones.

It sees two-way radios as an important market with innovative technologies keeping the company ahead of the competition.

Research conducted at the Western Australian Telecommunications Research Institute led to the founding of Sensear in Perth in 2006. The institute is a joint venture between the University of Western Australia and Curtin University.

Mr Miller said the partnership was a great match between Sensear’s technology and the global reach of Motorola.

‘“Motorola Solutions is the indisputable leader in the two-way radio market worldwide and we are pleased they chose Sensear to exclusively develop and manufacture the new digital XBT,” he said. “We believe it represents a new area for wireless Bluetooth two-way radio connectivity for Motorola’s global customers.”