Traditional takeover activity in corporate Western Australia has been quiet this year but it’s a different story in the oil and gas sector. 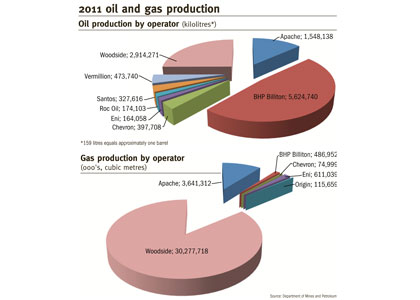 Traditional takeover activity in corporate Western Australia has been quiet this year but it’s a different story in the oil and gas sector.

Recent weakness in the iron ore price and the scrapping of some big projects has prompted many people to question the durability of the booming resources sector.

There are no such doubts in Western Australia’s oil and gas sector, which has seen nearly a dozen merger and acquisition transactions worth in excess of $US10 billion completed in the past year.

These transactions, combined with an estimated $2 billion investment in petroleum exploration every year, signal the long-term interest of producers in WA.

Current and aspiring producers all want to put their foot on large oil and gas fields, so they are best placed to participate in future development projects.

Just this week, Woodside announced completion of the $US2 billion sale of part of its interest in the Browse joint venture to Japanese companies Mitsubishi and Mitsui, specifically Japan Australia LNG (MIMI Browse).

This transaction is particularly illuminating because it provides a basis for estimating the value of other M&A deals in the sector.

This will give it a 14.7 per cent interest in the Browse development on an assumed ‘unitised’ basis.

MIMI was not deterred by the political controversy surrounding the planned liquefied natural gas (LNG) hub at James Price Point near Broome, which is the preferred site for processing the Browse gas.

Nor was Shell deterred by this controversy.

In return, Chevron will acquire Shell’s 33 per cent interest in the Clio-Acme titles in the Carnarvon Basin and be paid a further $US450 million in cash.

Woodside, as operator of the Browse project, said the value of the Shell Browse deal was commensurate with the consideration paid by MIMI.

Based on the percentage acquired by Shell, it is likely the asset swap will be worth about $3 billion to each company.

From Shell’s perspective, the deal increased its interest in the two Browse joint ventures to 35 per cent and 25 per cent respectively.

“This is a good deal, not only because it aligns with Shell’s strategy of bigger direct stakes in key gas resources, but because it helps to simplify the ownership of the Browse gas fields,” the company’s upstream international director Andy Brown said at the time of the announcement.

“The Browse gas fields are a key LNG development opportunity for Australia,” he said.

“We’re committed to working with Woodside as operator, the other joint venture participants and key stakeholders to secure the best possible development plan for this important resource.”

From Chevron’s perspective, it will move to 100 per cent ownership of the Clio-Acme fields, which fits with its strategy of growing the size of its resource base in the Wheatstone area and creating expansion opportunities for its Wheatstone project.

The Wheatstone LNG project, currently under construction near Onslow, is anchored by Chevron’s Wheatstone and Iago gas fields.

In addition, Apache and KUFPEC will provide gas from their Julimar and Brunello fields.

That was tied in with an expanded off-take deal that makes TEPCO one of the major customers for Wheatstone.

In the past year, Japan’s INPEX has acquired a 17.5 per cent interest in Shell’s Prelude floating LNG development, South Korea’s KOGAS paid about $690 million for a 10 per cent stake and Taiwan’s CPC acquired a 5 per cent stake.

Other M&A deals in the petroleum sector have been at an earlier stage in the development cycle.

In June, South Korean conglomerate SK Group struck a deal potentially worth up to $US520 million to farm into the Caldita Barossa gas fields, located in the Timor Sea.

The staged investment will see current owners ConocoPhillips (60 per cent) and Santos (40 per cent) diluted. If all goes to plan, they will end up as part owners of a new gas development, with the gas to be processed either at Darwin or on a floating platform.

ASX-listed company Nexus is hoping for a similar outcome with the Crux gas field. It has struck a deal that will see Shell become the major owner and operator of the gas field, which could be developed independently or tied into Shell’s Prelude FLNG facility.

A more lucrative deal is likely to await US company Hess, which is negotiating development options for its Equus gas field.

Hess was awarded a 100 per cent interest in the Equus field in 2007. The next year, it made three commercial discoveries. Hess drilled a total of 16 exploratory wells on the block, 13 of which were natural gas discoveries.

Its success contrasts with the poor exploration results reported by Woodside. Since 2007, Woodside has drilled 25 exploration wells in search of extra gas for its Pluto LNG development.

The limited extra reserves it has found will be used as backfill for its Pluto train 1 LNG plant.

Woodside chief executive Peter Coleman has acknowledged this is a disappointing outcome.

It puts more onus on Woodside to negotiate a commercial supply deal with other resource owners, if it wants to proceed with its Pluto train 2 development.

Mr Coleman said in August Woodside had been in discussions with several gas owners in the region for some time.

Hess’ Equus development is considered the most logical candidate to supply Pluto 2, though Chevron’s Wheatstone LNG project is another potential buyer of the Equus gas.

Chevron’s bargaining position has been strengthened by its exploration success. It has made 14 gas discoveries offshore from WA since 2009, boosting its owned resource and reducing the need to negotiate with third parties.

If Woodside does develop a second production train at Pluto, it will reinforce the company’s status as the biggest operator of gas production facilities in the state (see pie chart above).

Woodside is also the state’s second largest oil producer, based primarily on production from its Vincent and Hermes fields (see table attached).

The biggest oil producer is BHP Billiton, with most of its production coming from the Pyrenees and Stybarrow production facilities, which are both located in the southern Carnarvon Basin, near Exmouth.

Pyrenees draws gas from the Crosby, Stickle and Ravensworth oil fields, with Ravensworth being the state’s most productive oil field.

The third major operator of oil and gas production facilities is Apache. Its major assets include the John Brookes gas field, which feeds the Varanus Island gas plant, and the Van Gogh oil project.

A recent addition is the Devil Creek gas plant, which ties into the Reindeer gas field offshore, both of which are jointly owned by Santos.