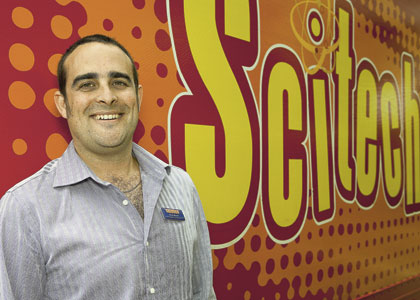 The Scitech program beat 12 other international entries to win the ‘Leading Edge’ award at the recent Association of Science and Technology Centres awards in Columbus, Ohio, in the US.

Scitech, which is more commonly known for its interactive science centre in West Perth, has been running the program since 2007.

The program differs from traditional teaching methods due to its extensive use of hands-on activities, simple instructions, and significant levels of non-verbal communication; this helps break through language barriers while up-skilling local teachers.

“There are up to six teams out every year and they will focus on specific regions.”

Each team comprises thre members - two science communicators who work with the students and a professional learning consultant who works with the teachers.

“At the moment we’ve just started our Goldfields tour, they’re currently working out of Kalgoorlie,”

Mr Wood said. “That team will then continue on and pick off every single remote community between the Goldfields and the South Australian and Northern Territory borders.”

Since its inception in 2007, the project has garnered support from BHP Billiton, Rio Tinto and Woodside, as well as the federal and state governments.

“The programs started with a combination of state and federal funding,” Mr Wood said.

“We ran the program out in remote rural communities, and looked for industry support when we started to see positive results.”

He said the corporate funding had enabled Scitech to increase the pro­gram’s outreach by 50 per cent.

“When our industry partners came onboard we were able to increase our school visit rotation from every three years to two,” Mr Wood said.

Support for the program also emerged from research by Edith Cowan University last month, which discovered school attendance had risen by up to 50 per cent as a result of Scitech’s visits.

Mr Wood said that among valuable pieces of information to come out of the report was the importance of the relationships developed between Aboriginal students and the program.

As a result of the findings, Scitech is now going to start fol- low-up Skype meetings with each

community, so as to and reinforce program initiatives after the Scitech team has left.

The ECU study conducted a series of interviews at 13 schools the pro­gram visited. It found that attend­ance had risen at all schools, stu­dents were more actively involved in class, and local teachers’ confidence had risen as a result of their involve­ment in the program.