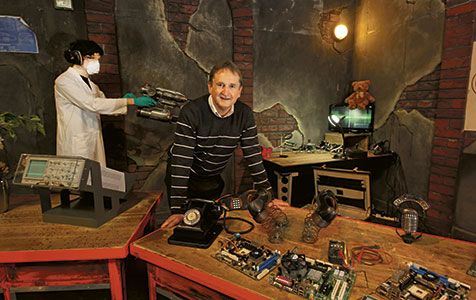 ANTICIPATION: Alan Brien has big plans for Scitech when it moves into its new home, likely in 2018. Photo: Bohdan Warchomij

After a quarter of a century in the city, Perth’s science education centre is on the move.

THE re-elected Barnett government may be retreating from pre-election ‘promises’ on power prices and transport infrastructure, but its pledge to relocate Scitech from City West to the new development at Burswood remains on track.

A quarter of a century after it opened, the science education centre has been allocated 9,500 square metres at the Burswood Peninsula development, up from 5,046sqm at City West.

It’s not only the need for more space and newer facilities that is motivating the relocation of Scitech, but also the opportunity to develop a science centre that appeals to all ages.

Scitech CEO Alan Brien said the organisation had been campaigning for a more suitable and permanent home for the past 10 years.

“We’ve adapted this space to keep the business thriving and growing, and at the same time presenting a strong case to government that we can do more,” Mr Brien told Business News.

An independent review in 2011 confirmed the restraints the organisation faced as its current site, as well as the growing success of the business.

More than 300,000 people visited Scitech during the 2011-12 financial year, 190,000 participated in its outreach programs, and nine of its exhibitions toured the east coast, as well as parts of Europe and South-East Asia.

Mr Brien believes Scitech presented the government with a strong case for relocation, with the limitations of the City West site and its growing list of achievements among the factors to help its argument.

“For us, it was an endorsement of the success of what we’ve been doing; we see it as more than just an election promise, we see it as an investment for the future,” Mr Brien said.

He said the central location of the new site and its proximity to public transport would be major benefits, but even more so was the potential for outdoor exhibits.

“People’s leisure time is largely affected by weather, so being an indoor attraction we sometimes struggle on beautiful days,” Mr Brien said.

“I think there needs to be a better interpretation of the environment in which we operate and live.

"We’ll be looking at creating some outdoor attractions that give people the opportunity to understand a little bit more about the life and ecology of the Swan River”.

“It’s about bringing people back who have enjoyed and grown up with Scitech and we want to be able to do that with a bit more comfort and a sense of style,” Mr Brien said.

“So it becomes an all-aged facility, rather than a children-focused facility”.

The new premises will be tailor-made to meet these objectives and will include an internally operated cafe, spaces specifically designed for evening functions, and relaxation spaces.

Scitech receives about 50 per cent of its funding from the state government, with the other half comprised of internal revenue and corporate support from sponsors such as Rio Tinto, BHP Billiton, Lotterywest and Chevron.

The exact position Scitech will take at the site is expected to be decided in the next month, at which point the designing process will commence.

Construction on the new building is set to be complete by 2018 when Scitech's current contract with City West runs out.