Scitech has building blocks in place 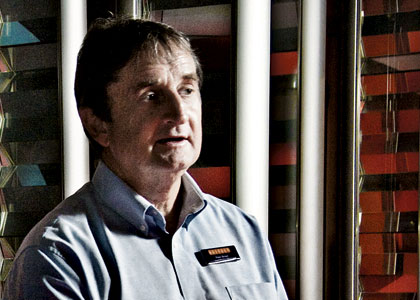 THERE is a collective murmur of excitement from the little visitors to Scitech, the state’s science and technology learning hub for children and adolescents.

The faces of the adults escorting their kids through what is known as Toddlerfest are filled with almost as much anticipation as those of the children, who race for the area that is transformed into the ultimate toddler science play zone for the annual event, with baby animals and science activities galore.

For those who haven’t been to Scitech in a while, the much-loved thongaphone (a musical instrument made of pipes and played with a thong) still exists in the science principles space, alongside broad and expansive programs created by the team of 150 full-time staff and 80 volunteers.

The organisation has been around for 23 years, and chief executive of 12 years Alan Brien explained that, with more than 260,000 visitors annually (and many return visitors among that number), constant evolution is a priority for Scitech, which has a mission of spreading the word on science and technology.

“We have to have good business practices, good finance and administration structures to then effectively deliver programs, continually market those programs and remain relevant. That is the loop we are in,” Mr Brien said.

“There is a richness about what we do, and how we reach different ages at different stages. All of it is about inspiring them to start thinking about this world of science and technology.

“We are continually packaging programs for specific audiences.”

The Scitech team uses its own workshop to produce all the exhibits that feature in Perth and tour around the world; for the exhibition Rescue, a replica of the RAC rescue helicopter was created and the organisation currently has eight exhibitions on tour, including one in Norway and another in Kuwait.

It also has: a planetarium, from which it runs its annual Astrofest; a digital technology room for teaching video production, music production and graphic design; and an outreach program, with 15 staff members dedicated to taking science programs to the regions, where they visit 85 per cent of the state’s schools.

Mr Brien is visibly inspired by what the organisation is doing.

He is not a scientist, but a master’s degree in education and subsequent years at the Australian Institute of Sport, establishing Whiteman Park and eKings Park’s events program (including Shakespeare in the Park and the outdoor cinema) has held him in good stead to develop Scitech.

The organisation receives five-yearly rounds of funding from the state government, and the most recent expires next year.

Mr Brien has submitted the strategic business plan to the government to secure funding until 2018, part of which is to expand the capacity of Scitech by securing 1,000 square metres of extra space.

“We need increased space. The crowding that is occurring is causing pressure on the visitors and on staff,” he said.

“That would enable us to expand the space for visitors and offer some new experiences we have got in mind.”