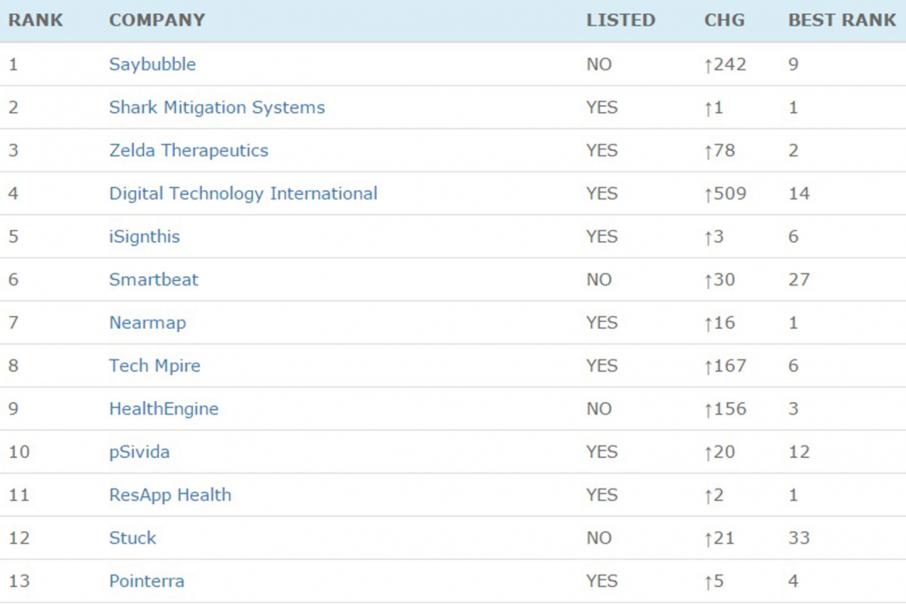 The startup launched in Perth in 2014 before raising money from Silicon Valley stalwart Larry Lopez, and is now based in San Francisco.

It's described as an AI-based geo-locational social media company - in other words it combines artificial intelligence with location to allow users better connect with their communities.

Last week the company announced it was now allowing users to download all their Facebook content going back more than ten years onto Saybubble’s platform – in thirty minutes or less.

Shark Mitigation Systems remains near the top of the table.

The shark protection company has successfully completed trials of its SAMS visual technology at Mossel Bay in South Africa.

Zelda Therapeutics began trading on the ASX this fortnight, following its reverse takeover of Gleneagle Gold.

“We are delighted to move to the next level of our business plan and with this $4 million capital raising behind us move to accelerate our pre-clinical and clinical programmes,” Harry Karelis, Founding Chairman of Zelda, told Techboard.

“We have assembled some of the best researchers globally in the field of medicinal cannabis.

“With our exclusive access to a large data set of patient experiences in California we are uniquely positioned to progress into human clinical trials over the next few months.

“We have a very full pipeline of initiatives we are now focused on progressing.”

Other companies of note in the top ten include Smartbeat (ranked sixth), which announced it had raised a $250,000 angel round from Tuth Murdoch and other investors, and Tech Mpire (ranked eight) which was ranked second in BRW's Fast Starters 2016 and fourth in Deloitte's Technology Fast 50 2016 Australia.

“The experience that Airbotix has in field operations with both their fixed wing and multi copter UAV fleet will be immediately accretive to C4D Intel’s client base and earnings profile,” according to C4D Intel Managing Director Alistair Scott-Farris. “We are tremendously excited about the end to end solution we can now provide or clients, from data capture and processing through to analytics and information management.

Tap Into Safety taps into Energise

Tap Into Safety has been announced as one of the startups taking part in KPMG Energise 2.0. The accelerator program is a three-month intensive program for startups and is one of the largest energy and natural resources accelerators in the Asia-Pacific region. This will be the second edition of the program, and begins at the end of this month.

Covocate co-founder and director Les Delaforce, a Gumbaynggirr man from New South Wales, has been featured in the 100 Days of Deadly, an initiative to highlight the positive work of 100 Aboriginal leaders in Western Australia.

Covocate is a digital human resources platform that streamlines the application process.

Pointerra in reseller agreement with CRK

Pointerra has signed a trial licence agreement with Australia’s largest importer and distributor of 3D laser scanning equipment, CR Kennedy & Company. CRK set to become an early adopter of Pointerra’s point cloud solution and a reseller of Pointerra’s solution in the Australian marketplace.