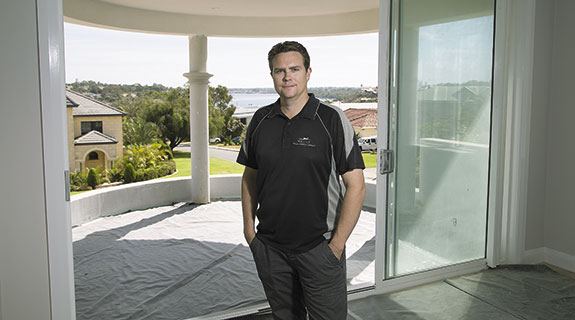 One of Perth’s most successful small builders is gearing up to move into the commercial construction space, part of a comprehensive rebrand amid slowing housing demand and a restrictive insurance regime.

The latest forecasts from the Housing Industry Association, released late last month, indicate 25,310 homes will be built in Western Australia over 2015-16, a reduction of 18.7 per cent on the previous financial year.

In the face of those statistics, former Business News 40under40 winner Ryan Cole said his building company, Savvy Construction, was in the initial phases of developing its first commercial construction project in Joondalup, after having exclusively built houses and high-end renovations for the past five years.

Mr Cole, who was also named the best young builder in the nation by the Master Builders Association in 2013, said he had re-evaluated his business over the past 12 months to determine how he could achieve sustainable growth.

The new strategy for Savvy Construction is to pull back from renovations and concentrate on building homes at a lower price point, while also developing a display village, under the banner Ryan Cole Building Excellence.

“With renovations … they are exhausting, they are quite labour intensive and there is a lot of client contact,” Mr Cole told Business News.

“I’m going back to an 80 per cent new builds-20 per cent renovations split, and hopefully move out of renovations entirely, unless something in excess of $1 million lands on my desk.”

Mr Cole said he had also considered a partnership with another builder, but it did not stack up to his liking.

The business’s commercial projects will be built under the Savvy Construction banner.

Mr Cole said the shift into commercial work would result in revenue growth that could not be achieved in residential construction, partly because of the restrictive nature of WA’s home indemnity insurance scheme.

Under the scheme, which has been a concern of the Master Builders Association of Western Australia for some years now, insurers QBE and Calliden essentially control how much work a builder can do by assessing their financial situation and issuing home indemnity insurance accordingly.

“I’ve had to look outside the box to grow, hence we’re going into commercial,” Mr Cole told Business News.

“You don’t need housing indemnity for commercial projects, which means I can still trade and keep my revenue up.

“If I couldn’t get a bit of commercial work, I had the thought of going back and working for a bigger builder.

“I’ve had a client in Cottesloe that’s waited two years for me to get to site, purely because my indemnity was full.”

Mr Cole said he believed the Building Commission should have a bigger role in determining if a builder was fit to carry out works, particularly following the collapse of three home construction companies in 2015.

QBE announced last month it was increasing its home indemnity insurance premiums by 18 per cent in January, a cost that amounts to between $3,500 and $5,000 on the average house, which is passed on to consumers.

“Obviously there has got to be some sort of regulation on growth,” Mr Cole said.

“Personally, I think that building registrations need to be restricted.

Savvy Constructions’ first commercial project, which will be a retail development, will be constructed in Joondalup and launched early next year, subject to negotiations with a national retailer.

Although acknowledging the business restructure was something of a necessity, Mr Cole said it also had an added bonus – a better work-life balance.

“It’s more or less changing the business model to suit me as a director, moving forward,” he said.