Ryan Cole’s Savvy Construction may be a new player in the building sector, but it has taken a distinctively old-school approach to winning business. 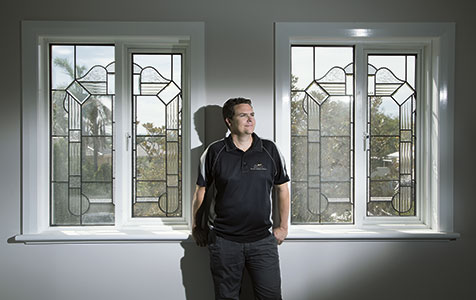 Ryan Cole’s Savvy Construction may be a new player in the building sector, but it has taken a distinctively old-school approach to winning business.

Savvy Construction director Ryan Cole says he’s proud that his business, which has only been operating for about four years, is already giving long-established builders a run for their money in Perth’s competitive home building industry.

Savvy has increased its turnover seven-fold since its first project started in March 2010, and currently employs around 80 sub-contractors as well as four permanent full-time staff.

This growth was achieved without a single dollar spent on advertising, with Savvy instead relying on word-of-mouth referrals to promote its business.

Mr Cole, who worked as a carpenter before being forced off the tools due to carpal tunnel syndrome, said one of the biggest challenges for the fledgling company was building its reputation in a crowded industry.

“There are 5,000 small builders out there, so to separate yourself from them is a challenge.

“My view when I started was you need to get the runs on the board, you need to win awards and you need to do that so you’ve got a platform to launch from.

“That’s where we’re at now, we’re ready to launch from that platform.”

Mr Cole’s goals for the next few years include establishing two new divisions – Savvy Living, which will focus on affordable new builds and renovations, and Savvy Outdoors, which will focus on external works including landscaping and construction of concrete swimming pools.

“We’ve got four big jobs finishing at the moment, so we’ve created a three-month window of opportunity to re-evaluate the business and really go after the niche that we want to hit,” Mr Cole said.

“We’ve given ourselves the opportunity to be a bit selective, and that’s where I want to be.

“I want to be a builder where clients wait for you. They will wait for you because of the reputation you’ve earned and you’ll give them the end result that they’re after.

“What we give our clients is honesty and integrity and we build the houses as if they’re our own.”

Mr Cole describes himself as a master builder in the true sense, with his hands-on approach meaning he is physically involved on a day-to-day basis with all of Savvy’s projects.

That approach has resulted in a growing waiting list of clients seeking to use Savvy Construction, with projects booked as far forward as 2015.

“It shouldn’t be that hard to build a house for someone,” Mr Cole said.

“A lot of times I get involved with people and they say ‘I’ve spoken to a few builders and it’s just been a nightmare’.

“At the end of the day, you design it, you build it and everyone should be happy. It shouldn’t be that hard.”

But Mr Cole said it wasn’t the volume of work but rather his quality of workmanship that had helped the business make a mark in the industry.

“But we cap our jobs, so as soon as we get five or six jobs, that’s when we say ‘no’, and clients will wait for us to get those jobs finished.

“I feel it’s better to do less projects and still get the end result that’s best for me.”