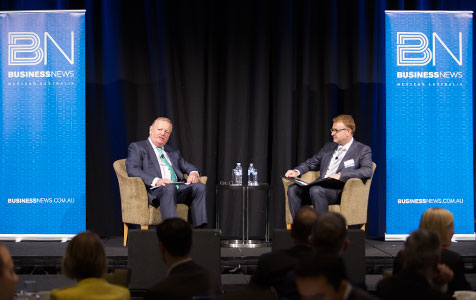 The Satterley Property Group founder told a Business News Success and Leadership event this morning that he had been recently researching Perth’s apartment market and found for the past five years, around 1,000 apartments in buildings four storeys or higher had been approved while only 750 were sold each year.

In the last 10 months alone, Mr Satterley said, there were around 1,700 apartment approvals.

“I certainly wouldn’t be buying a high-rise apartment at this time,” Mr Satterley said.

Mr Satterley described current apartment sales as very soft, and pointed to a number of potential projects that were in danger of stalling as sales slow.

“The Belmont (Park) project has been put on hold for one to two years, and who is going to buy all the apartments at [Waterbank] and in the city?” Mr Satterley asked.

“Sales have virtually dried up and rents have come off 20 per cent, so there is a lot of work to do.”

Indonesia’s Golden Group is planning a multi-phase, 4,500 apartment development surrounding the Belmont Park Raceway, while Lend Lease is planning to build 600 apartments in East Perth, making up the Waterbank project.

Lend Lease is aiming to kick off apartment pre-sales midway through this year, with construction to begin before the end of December.

The Belmont Park project is being managed by Perth-based firm Development Management Group.

“In terms of timing, we are now kicking off more aggressively our planning, we still need to deal with the Town of Victoria Park,” Mr Steens said.

“The detailed area plan will be completed in six to nine months, and we can possibly run a development application in parallel with that as well.”

Mr Steens said the company was confident that Perth’s rapid population growth would underpin apartment sales at the development.

According to the Australian Bureau of Statistics, Western Australia’s population grew by 76,000 in the year to September, a 3.1 per cent rise.

Natural increase accounted for more than 20,000 of the new residents, while 6,841 residents migrated from interstate, and 48,442 people arrived from overseas.

Those figures, Mr Steens said, were ample evidence that the market could support the proposed Belmont Park project.

“It is important that we as the developer and the financier, we need to be real about this,” Mr Steen said.

“We’re still very cognisant of the requirement to sell 75 per cent of those apartments before we get that bank funding in place so it’s very market driven.”

Mr Blackburne said there had been only 15 to 20 small projects with an average of 100 apartments each released in Perth in the past 12 months.

“We simply are not building enough new apartments for the increasing demand,” he said.

“There will be periods of slow sales, however in general we need around 1 million new apartments in WA over the next 20 years.

“Given our population will double over the next 30 years, there is more than enough demand to take up any possible supply that developers can deliver.”