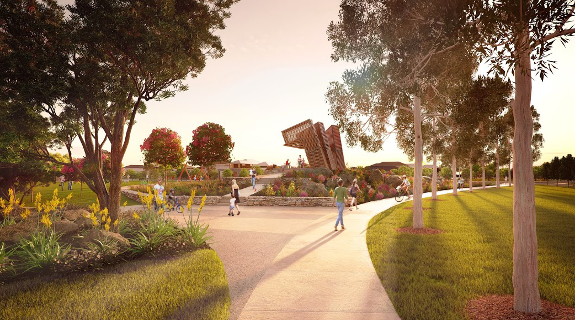 An artist's impression of parklands in the Arena Estate. Photo: Peet

As well as the residential lots, the estate, which Peet began developing in 2014, also includes a $9 million sports precinct.

Satterley Property Group managing director Nigel Satterley said the company remained committed to increasing its market share in Victoria, with two of his company's estates in the state, Riverstone and Coburg, nearing completion.

“Arena is already trading and is essentially an infill site within highly sought-after Greenvale.

“It's close proximity to transport, schools, arterial transport and amenities is another big drawcard for purchasers.”

Mr Satterley said the group's market share in Victoria had more than tripled over the past two years, from 3 per cent to more than 10 per cent.

He said the group was upbeat about its Victorian opportunities.

“While the residential market is in the spotlight at the moment, the fundamentals are positive, underpinned by buyer demand, strong confidence and sustainable growth in land development values,” Mr Satterley said.

Peet managing director Brendan Gore said the deal would allow the developer to focus on other projects.

He said the proceeds of the sale, which will occur in several instalments over three years, would provide the Perth-based property firm with cash to fund a number of growth opportunities currently in the works.

“Peet continues to manage and leverage its asset base in a manner that maximises the return on the capital it employs and ensures the company is well-positioned to take advantage of growth opportunities as they arise,” Mr Gore said.

Meanwhile, Peet also confirmed today that it expected a 27 per cent rise in net profit to $38.5 million, ahead of its previously announced guidance of $38 million.

Peet plans to release its full-year results on August 27.