It may seem like an entirely offshore deal, but Japanese tech giant Panasonic’s purchase of US satellite communications provider ITC Global has a strong Western Australian flavour. 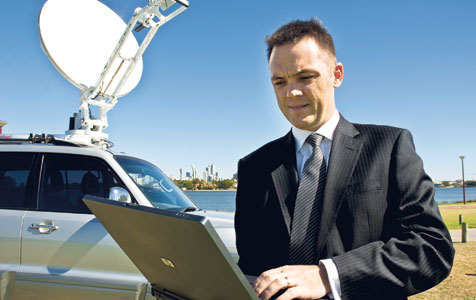 It may seem like an entirely offshore deal, but Japanese tech giant Panasonic’s purchase of US satellite communications provider ITC Global has a strong Western Australian flavour.

ITC Global’s WA-based Asia-Pacific division is considered one the key drivers behind the development of the global business, and Perth remains an important engineering and operations hub for the group.

While the local management says it is business as usual, there is speculation as to how much they may personally gain from the sale of Houston-based ITC Global from a price that, while not officially disclosed, was put at several hundred million dollars by reputable sources such as The Wall Street Journal.

A specialist satellite communications provider, ITC Global has grown up on the back of high demand from remote operations such as those in the resources sector. From its earliest bases in Miami and Perth it offered full coverage of the African continent.

It has also been active in the local market and won a WA Information Technology and Telecommunications Award for its work with BHP Billiton’s IROC mining project, which was focused on autonomous operations controlled from Perth via high-speed links.

The group started in Miami in 2001 to service the hurricane-hit Caribbean, but it was the opening of its WA operations led by Mr Hill in 2006, with funding from Australia and the US, which reinvigorated the business through a focus on delivering high-quality end-to-end service for rapidly expanding Australian and Canadian mining companies operating in Africa and Australia.

“Between Perth and Miami, we were able to service all of Africa and to land traffic back to North America or to Australia, and we subsequently grew the business through organic growth and acquisitions to encompass another 18 teleports servicing customers right around the globe, in the mining, oil and gas, and maritime sectors,” Mr Hill told Business News regarding the history of the business.

US private equity firm Riverside Partners took control in 2011. ITC Global currently operates from 20 different teleports around the world and leverages capacity on more than 30 satellites, with significant presence in over 70 countries.