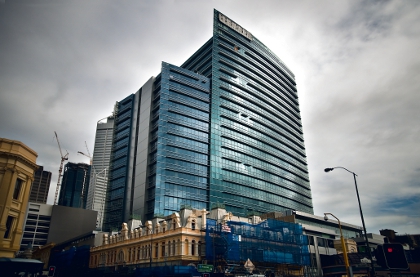 The joint financiers of Raine Square have launched further legal action against Luke Saraceni, alleging misleading conduct over the use of proceeds from the sale of a stake in a residential development in the South West and moving to recover costs caused by the delay of court proceedings.

The financiers, Bankwest and Bank of Scotland International, lodged a writ in the Supreme Court of Western Australia earlier this week, claiming Mr Saraceni had said $7 million raised from the sale of a stake in the Vasse Newtown development near Busselton would be applied to reduce debts on Raine Square.

According to a statement released by receivers and managers of Raine Square, Korda Mentha, that didn't happen.

Mr Mentha said Mr Saraceni had made written and oral representations to the financiers in relation to the funds, which they allege were false and misleading.

“Despite telling the joint financiers the net proceeds of the sale of Seaport's interests in Vasse Newtown would be applied to reducing the Raine Square debt, this money was never applied to the Raine Square debt and the application of the monies received from the syndicate of investors continues to be unaccounted,” Mr Mentha said.

IMF Australia managing director Hugh McLernon, whose litigation funding company is backing Mr Saraceni, categorically denied the bank's claims, saying there was never an agreement the funds would be transferred to the Raine Square debt and the financiers were not entitled to them.

Bankwest also filed an application for orders for companies associated with Mr Saraceni to provide security to pay for the bank's costs of defending legal allegations brought against it.

The bank said it was concerned a broader legal claim Mr Saraceni has threatened to launch against a number of parties, including Bankwest, may never eventuate, and the threat of that claim was stalling current proceedings against the developer.

A bemused Mr McLernon also rejected those claims, saying the action from Mr Saraceni would be ready in due course.

“I have never seen a bank so eager to get sued,” Mr McLernon said. “There is something a little bit strange about it.

“There is a large group of lawyers who are very carefully perfecting the state of claim.

“When it is perfected it will be lodged.”