Saracen Mineral Holdings has purchased the Thunderbox gold project from Norilsk Nickel for $23 million, in a deal which could double the company's production to up to 270,000 ounces per year. 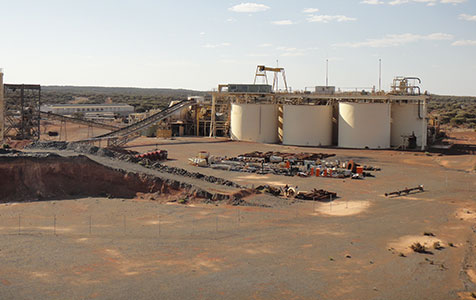 Operations at the Thunderbox project in the north eastern Goldfields.

Saracen Mineral Holdings has purchased the Thunderbox gold project from Norilsk Nickel for $23 million, in a deal that could double the company's production to 270,000 ounces per year.

The purchase includes the Thunderbox and Bannockburn gold mines, as well as the Waterloo nickel mine, located in the Yandal Belt in the north-eastern Goldfields.

Saracen will pay Norilsk $20 million cash on settlement and a further $3 million cash upon the commencement of commercial production, following an extensive sales campaign handled by Citigroup.

Russia-based Norilsk acquired the gold assets in 2007 as part of its purchase of nickel miner LionOre, and the assets have remained on care and maintenance since that time.

Saracen hopes to resume production at Thunderbox within 18 months, but must secure a suite of approvals and complete a definitive feasibility study before making a final investment decision.

Its decision to proceed with production will also be motivated by the state of the gold price, which has recovered ground in recent weeks after slumping last year.

Saracen has taken a cautious approach to managing price volatility, last month increasing its hedging program with Macquarie Bank to 180,000oz at an average price of $1,627.

The program provides flexibility to deliver up to 100 per cent of production into hedging for the next eight months, safeguarding the miner from any potential drops in the gold price.

“If you look at it and see we’ve got an acquisition price of $23 million off today’s gold price, off the reserves and the costs we’ve laid out, we generate in excess of $200 million of free-cashflow, so we get a 10-fold return,” Mr Finlayson told Business News.

“So certainly off these levels, it goes live. If we see the gold price climb in the period between now and making the (final investment) decision, even better.

“We’ve got a situation where in the short term, we’re extremely protected with our hedge book (but) if the gold price were to rise, acquiring these assets (means) we’ve got 728,000oz of reserve that don’t have any hedging attached, so I suppose we’ve got both angles covered.”

Saracen has increased its debt facilities with Macquarie Bank from $45 million to $55 million, with $22 million drawn down from this facility.

Mr Finlayson said he was comfortable with the debt increase, pointing out that the company had not touched its debt facilities in several quarters and retained more than $20 million in cash and bullion.

The purchase marks the latest deal in the local gold sector, which is showing signs of green shoots after a troubled 2013.

Blackham Resources yesterday announced it had agreed to pay up to $4.6 million for the Wiluna gold plant in Western Australia from the receivers of Apex Minerals.

Northern Star Resources last month secured Barrick Gold’s Plutonic gold mine for $25 million, in a deal touted by brokers and analysts as a bargain for the miner.

Macquarie Capital is acting as financial adviser to Saracen in respect to the Thunderbox transaction.

Saracen shares went into a trading halt this morning and last traded at 22.5 cents.