The Prendiville family-owned Sandalford Wines has bought the Killerby vineyard in Margaret River for an undisclosed sum and has not ruled out further land acquisitions.

The Prendiville family-owned Sandalford Wines has bought the Killerby vineyard in Margaret River for an undisclosed sum and has not ruled out further land acquisitions.

Chief executive Grant Brinklow said the land purchase, across Caves Road from the Sandalford estate in Margaret River, was the culmination of two years of negotiations with vendor Ben Killerby.

"We thought the timing was right now, and we were able to reach agreement on the price," he said.

Its understood that Mr Killerby had wanted to sell both the brand and vineyard together, however Mr Brinklow said Sandalford was not interested in acquiring the brand.

Ferngrove bought the rights to the Killerby label about a year ago and has plans to set up a cellar door to launch a presence in Margaret River.

Calls to Ferngrove chief executive Anthony Wilkes were not returned at time of publishing.

Mr Brinklow today said that vineyards acquired as part of the Killerby land purchase will be used for Sandalford's wines. He added there was no previous supply arrangement to Ferngrove or any other party.

The purchase has boosted Sandalford's 1,000 acre landholding in the region by 30 acres.

Along with access to more vineyards, the land acquisition will also give Sandalford's Margaret River estate an entry point from Caves Road and make it easier for patrons to attend large scale concerts and events that are planned to start this year.

The Sandalford events area in Margaret River will have capacity to hold between 12,000 and 15,000 punters.

"The Prendiville family are very excited about the grander plans that involve replicating a lot of the tourism infrastructure that we've got in the Swan Valley and ultimately expanding on that to include accommodation," Mr Brinklow said.

"At this stage we've already got plans drawn up for a spa resort or gourmet retreat, I can't say exactly when that's going to happen.

"It's all going to be done in a staged way."

The Prendiville family owned Sandalford Wines will expand further as a result of an agreement to purchase the Killerby vineyard located at Lot 12 Caves Road in the Wilyabrup sub-region of Margaret River.

The Killerby property is on the Western boundary of Sandalford's existing 1,000 acre vineyard, with Evans and Tate's Redbrook property to the North, and Pierro's vineyard to the South.

Sandalford's original vineyard was established in 1970 and has some of if not the oldest Cabernet Sauvignon, Chardonnay, Shiraz, Verdelho, Semillon and Sauvignon Blanc vines in Margaret River. This property is arguably the most prestigious vineyard in Margaret River if not Western Australia in terms of both the location (terroir) and its proven capacity to produce viable quantities of outstanding quality fruit needed to make truly super premium wines from Margaret River.

The acquisition coincides with Sandalford's plans to commence a large scale concert/events program in Margaret River operations in the 2009-10 season which will in turn mark its 40 year anniversary in making world class wines from this appellation.

"The purchase of the Killerby vineyard provides a very, very unique long term opportunity for Sandalford on a number of different fronts. First and foremost and coinciding with our vision of delivering 'a fine wine experience', our primary objective is for Sandalford to be a benchmark producer of premium and super premium wines from one of Australia's (and fast becoming the worlds) leading wine producing appellations - Margaret River."

"This acquisition will help achieve that objective by giving us access to some more well established vines on arguably one of the best sites in the region."

" In addition to this and based on our experience at Sandalford's 170 year old vineyard at Caversham in the Swan Valley, we think it's advantageous to have a Caves Road entry point for patrons who are expected to attend the large scale concerts and events we plan to hold at the site in the years ahead."

"Negotiations are currently underway with our promoter partners to bring some truly world class performers to our Margaret River vineyard next season the likes of which haven't performed in the region previously. To date our owners (the Prendiville family) have made an enormous investment to ensure the concert site is ready in time for the first performances in the 2009-10 seasons for audiences of 12,000 patrons or more per show.

"We have aspirations of making our Margaret River vineyard the premier winery concert venue in the country".

"Beyond that I think there is real scope to develop the wine tourism offerings at our Margaret River Estate along similar lines to what we have at Caversham in the Swan Valley which already include a GOLD PLATE winning restaurant (2008 Catering Institute), the leading Cellar Door facility in Western Australia (2008 WAWIA), four times winner of Western Australia's best wine tourism facility (WA Tourism Council) and of course a former winner of the Sir David Brand prize for Tourism being the pre-eminent tourism award across all categories in Western Australia. More and more evidence reflects the timing could soon be right for us to invest in these particular areas in Margaret River"

"The investment in the concert site, additional planting of 25+ hectares of vines at our existing Margaret River vineyard, of course the Killerby acquisition, along with possible future tourism developments at the property all reflect our collective confidence, enthusiasm, measured belief and generally long term view about the ongoing success of Sandalford Wines, Brand Margaret River and the Western Australian wine industry generally. The industry clearly faces some immediate challenges but we are very confident the 'renaissance' of Sandalford will continue and it is therefore important we invest for the future and continue to take a very long term view. That has been exactly the case since the Prendiville family acquired Sandalford Wines in 1991'. 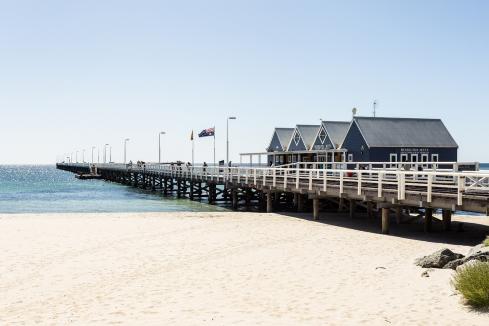