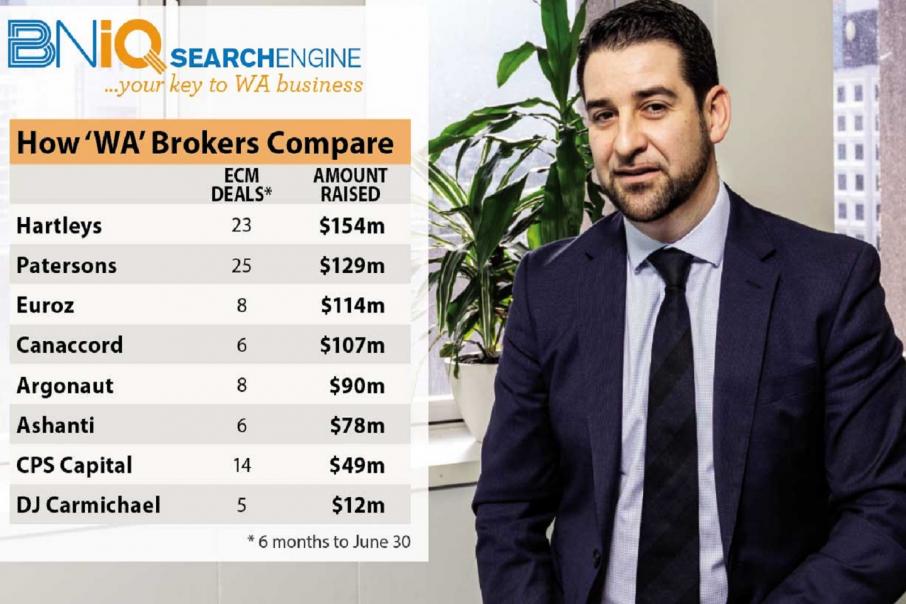 Canada’s Canaccord Genuity has bought Patersons, and together they could challenge local market leaders Hartleys and Euroz in capital raisings.

Their combined market power is apparent from the latest BNiQ data on WA-related capital raisings over the six months to June 30.

In what was a very quiet period, Hartleys raised $154 million in 23 transactions over this period, putting it ahead of Patersons and Euroz.

(The ranking is based on lead manager mandates for completed deals, with the money split if there is more than one lead manager.)

Just behind the local firms was Canaccord, which raised $107 million through six transactions.

If the numbers for Patersons and Canaccord were combined, the group would have raised $236 million in 31 transactions.

There has been a similar pattern over the past few years.

Patersons has typically been lead manager for a large number of relatively small deals, and in aggregate has raised substantially less than Harleys and Euroz.

But after adding Canaccord’s WA-related deals, the combined group rivals its local competitors.

It remains to be seen whether the combined group – which will trade as CG Patersons, once the deal is approved – will sustain that kind of deal flow.

Hartleys biggest transaction for the half year was a $43 million raising for gold miner Pantoro, with Bell Potter (underwriter) and Argonaut as joint lead managers.

Head of corporate finance Dale Bryan said this was an example of an experienced management team buying a known asset to minimise risk.

“That’s probably where the next funding deals will come,” he said.

Like Patersons, DJ Carmichael will also be rebranding, once it finalises a takeover by Sydney-based Shaw & Partners.

The acquisition of DJ Carmichael adds to a period of rapid national growth for Shaw.

He said the broking sector had faced a lot of disruption and was continuing to evolve, with new regulatory, compliance and education standards adding to the change.

Ms Bosio said the firm would not become just a financial planning-style operation.

“We have a unique ability to look at individual stocks, and in WA we have a bias towards resources,” he said.

“That’s one of the reasons Shaw was attracted to us.”

The combined firm will have about 25 advisers and Mr Bosio said he was looking to expand.

“If we can attract another five to 10 good advisers, we will have a hell of an office over here.”

“This gives us the ability to take junior companies and give them the funding and support they need to go to the next level,” he said.

He noted that many east coast institutions were less interested in junior stocks.

“That pool of money is shrinking, it’s getting harder,” Mr Bosio said.