A device targeted at the OH&S market is being taken up by mining, transport and storage industries to cut costs associated with workplace injuries. 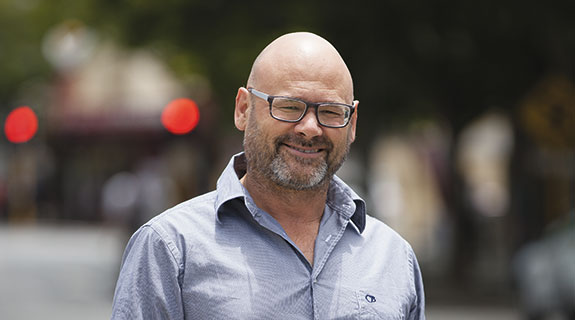 A device targeted at the OH&S market is being taken up by mining, transport and storage industries to cut costs associated with workplace injuries.

An Australian-first motion-sensing device is providing a simple solution to the growing number of workplace transport accidents caused by inattention due to the use of in-vehicle screens.

Developed in West Perth, Blank-It manages in-vehicle computer displays to prevent crashes by restricting access to the screen when the vehicle is in motion.

Founding director of the company and developer of the technology, Philip Little, told Business News that while the first version was released in 2004, the US market was now beginning to pick up the innovation at a more rapid pace.

“The installation of computers in vehicles is becoming increasingly common as the working environment becomes more mobile than ever.

“Companies want their employees to be able to work and communicate effectively, even when on the road, but this poses a safety risk.”

The program, contained in a USB, was originally built in response to legislation for public-road vehicles.

Blank-It now targets occupational health and safety environments, with the biggest rise in this market from companies using warehouses.

“It’s a market that we didn’t even anticipate, but we’re in quite a number of organisations now for forklifts,” Mr Little said.

He said along with this market, it was logical for Blank-It to also be used in mining environments, with an existing significant exposure to the industry through his other venture, data management company Expedio.

Expedio has developed data collection software that is used by a number of resource companies throughout Western Australia and nationally.

“There’s absolutely a market in the mining industry for Blank-It to be plugged in to work in conjunction with any of the mine tracking software out there,” Mr Little said.

Preliminary data from Safe Work Australia for 2011 to 2012 show that WA recorded the highest incident rate among transport and storage workers, with 25.5 serious claims per 1,000 employees.

The state also recorded the highest number of claims involving 12 or more weeks off work, with 8.8 per 1,000 employees in the industry.

These statistics have grown over the past five years for the industry, with the demand for additional safety measures to reduce injuries and the costs associated driving Blank-It to release a new generation device.

The new model can detect when a forklift is moving up and down, which will cater to the growing warehouse market.