Safescape has the edge on mine roads

The top Western Australian company in this year’s Energise accelerator program is developing an ambitious plan for robotic on-site manufacturing of equipment it believes will boost safety and dramatically cut costs at open pit mines. 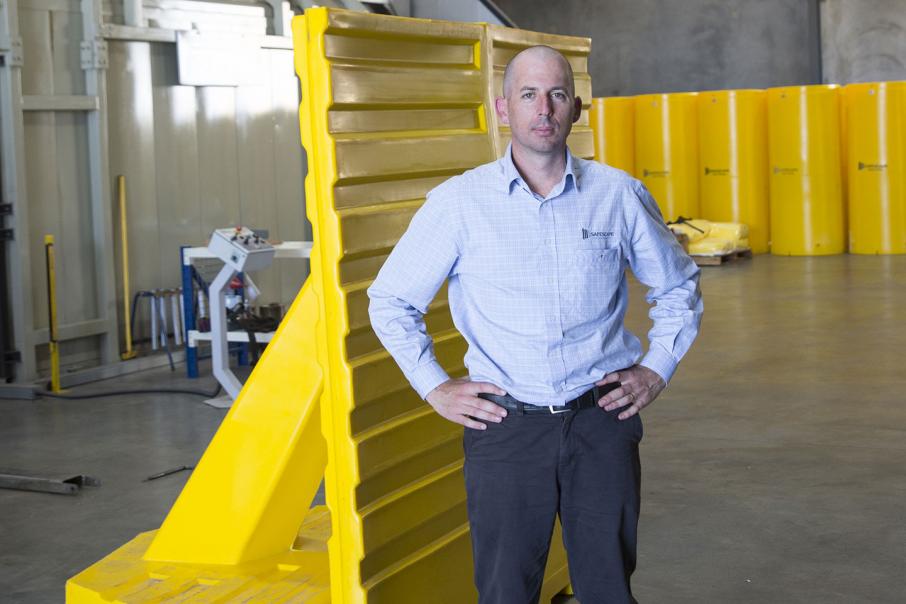 The top Western Australian company in this year’s Energise accelerator program is developing an ambitious plan for robotic on-site manufacturing of equipment it believes will boost safety and dramatically cut costs at open pit mines.

Manufactured at Safescape’s plant in Forrestfield, Laddertube is used in 73 mines in 13 countries.

“It provides us with revenue and the ability to invest in further R&D.”

Mr Durkin sees even bigger potential for the business’s Edge Protector product, which is a modular plastic wall system designed to support the dirt embankments that line the edge of haul roads in open pit mines.

Designed with input from mathematics professors at the University of Western Australia, the Edge Protector aims to stop haul trucks driving over the dirt embankments and toppling over the edge.

“Edge Protector fixes that, it creates a vertical front face to the bund so the truck can’t drive up it,” Mr Durkin said.

“It works a bit like a truck arrester bed on a highway. The truck has to plow through the rock instead of driving over it, so it’s heaps better at stopping trucks going over the edge.”

He said the product’s safety benefits were clear, but it also needed to deliver economic benefits for it to become commercially viable.

Mr Durkin believes Edge Protector will allow haul roads, which are typically about 40 metres wide in large open pit mines, to be at least 2.5 metres narrower.

“In every case we’ve looked at so far, there are significant economic benefits,” he said.

The product had a soft launch late last year when Safescape presented a paper at a technical conference.

“Since then we’ve been fielding interest from all around the world on doing trial projects,” Mr Durkin said.

He accepts it will be a big commitment for mining companies to change their pit design to suit the new product, but is nonetheless encouraged by the level of interest.

“We haven’t sold any, but interest is huge,” Mr Durkin said.

The bulk and weight of Edge Protector makes transportation of the finished product very costly, so Mr Durkin is looking to develop a fleet of robotic manufacturing plants that would be housed in 40-foot shipping containers and assembled at mine sites in a couple of hours.

Most of the R&D has been undertaken in-house, but Safescape has partnered with Melbourne-based Whittle Consulting on commercial analysis and Belgian company AMS on the robotics, while Evolution Mining has provided a site for physical testing.

Mr Durkin expects it will be about six months before the first of these modular facilities is in a usable state.

Safescape entered the 12-week KPMG Energise accelerator program to help develop a global rollout strategy, but ended up with an unexpectedly different benefit.

“We went in there hoping to get a really good hold on an international fast-growth strategy.

“We’ve done some base work on that, but we got more out of the first part, the customer engagement and pitching process, we’ve really refined how we do that.”

The investor award was won by Brisbane’s MOVUS, which has created what it calls a Fitbit for industry, while Brisbane’s Ozius Spatial won the program choice award.

Completion of this year’s Energise program coincided with the Queensland government announcing it would fund a new accelerator program, to be run in partnership with industry group METS Ignited and operated by KPMG.

It is part of that government’s $6 million, four-year commitment to METS Ignited.

The new accelerator will target late-stage companies and will run in tandem with a separate accelerator for early-stage METS technology companies in Queensland.

KPMG's Energise program director Ashley Brown said the firm was still in the evaluation period of the Energise program, which has run for two years, and was collating and analysing feedback from startups and corporate partners.

Once this process is complete, KPMG will think about potential future programs in WA, as well as in sectors beyond the METS sector.