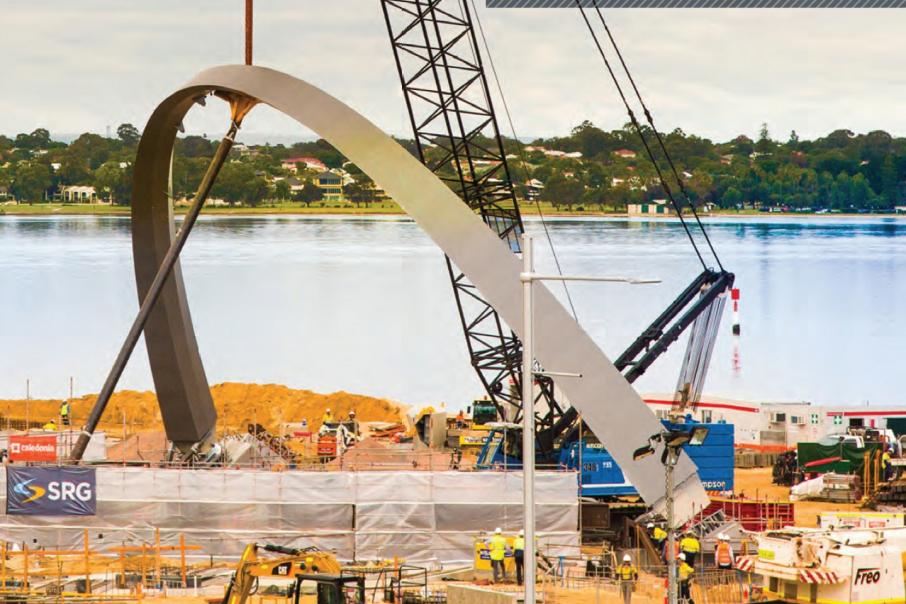 The bridge at Elizabeth Quay was one of SRG’s highest profile projects in FY2016.

Civil contractor and mining services company SRG Limited says it is well positioned for further growth on the back of recent contract wins, after booking a 52 per cent lift in net profit in the 2015-16 financial year.

SRG, which operates out of Perth, Sydney, Melbourne, Brisbane, Hong Kong and the Middle East, and was part of the joint venture that built the eye-catching bridge at Elizabeth Quay, booked revenue of $178 million for the 2015-16 financial year, up 3 per cent on the previous year.

That resulted in a net profit lift of 52 per cent, to $6.2 million, in line with guidance released to the market midway through last month.

SRG’s mining division took a 15 per cent hit to its revenue for the year, which came in at $56.6 million.

SRG’s work in hand increased 56 per cent, to finish the year at $240 million, including contracts with Evolution Mining and Woodside Petroleum in Western Australia.

Along with the record work in hand, SRG said it had a pipeline of work opportunities worth around $975 million.

Managing director David Macgeorge said the company was pleased to increase its full year final dividend by 140 per cent, to 6 cents per share.

“The 2016 financial year was a year of continuing to build on the foundational work done in FY15 and transitioning into the development phase of SRG’s strategy, which is focused on growth, expansion, acquisitions and disciplined execution,” Mr Macgeorge said in a statement to the ASX.

Chairman Peter McMorrow said the company’s diversity across mining, building, civil construction and services had served it well in FY2016.

“We are focused on increasing shareholder value through profitable project execution, securing specialised civil products of scale, achieving organic growth in target markets, growing in markets and services that are complementary to the existing business, acquiring bolt-on businesses where it makes commercial sense to do so, and strengthening our brand recognition with customers,” Mr McMorrow said in an address to shareholders contained in SRG’s annual report.