SPECIAL REPORT: Small businesses have taken a hit as confidence drops and the economy slows, but there are a few things governments can do to begin to alleviate the pain. 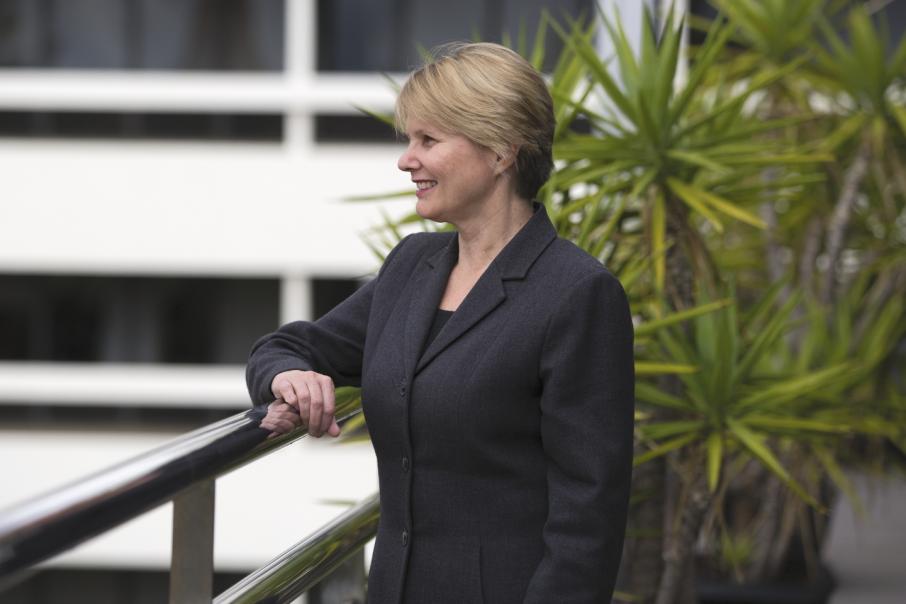 Small businesses have taken a hit as confidence drops and the economy slows, but there are a few things governments can do to begin to alleviate the pain.

Many of those connected to this important tier of business believe governments have been too slow to react to their needs, suggesting there is a range of ideas at state and federal levels that could spark the economy by improving productivity and competitiveness.

One recent survey of small and medium-size enterprises by marketing firm Sensis crystallised the mood, with WA SMEs the least confident of any state. Only 14 per cent say the state government’s policies are supporting them. 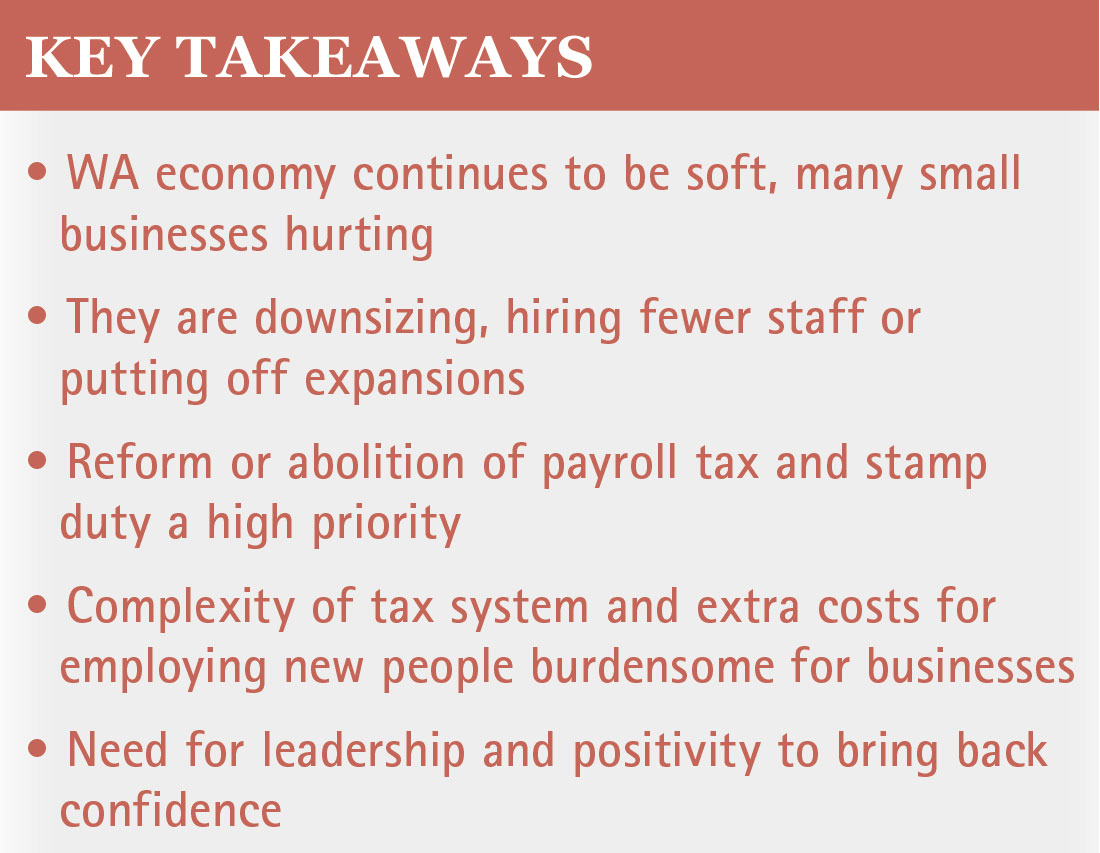 “It’s mainly to do with discretionary spending,” Mr Harris said.

“The consumer confidence just isn’t there. We’re not getting the young family people buying a lot.

“Balcatta, Midland, there are ‘for lease’ signs everywhere.”

Mr Harris, who owns Gun Mart and Tackle in Midland, among other operations, said he had noticed people were spending more time at work because of job security worries, and spending less on recreation.

Swan Chamber of Commerce business manager Denise Oma said the resources slowdown had filtered through into her area.

“We are hearing of businesses closing daily in the area,” she said

“There are vacant shops and lots of business is going into receivership, so it’s (the slowdown) definitely happening.”

Also in Midland, The Honda Shop owner Eddie Peters said turnover for some businesses had been down 30 per cent.

“Certainly there’s a lack of confidence out there for people to spend,” he said.

The impact has been significant, with Mr Peters aware of a number of businesses that were downsizing.

“There’s a lot of businesses that are struggling along,” Mr Haddow told Business News.

“There doesn’t seem to be any bounce.”

In an echo of Mr Harris’s comments about leasing opportunities in Balcatta and Midland, Mr Haddow said there was an increasing amount of property opening up in Malaga’s industrial zones.

Many of those businesses had been suppliers to the mining industry and were now working to find new customers, he said.

There were some bright pockets, however, with Mr Haddow pointing to a 3D print shop that had just set up in Malaga, and another making solar panel inverters.

One policy that had been of benefit, Mr Haddow said was the federal government’s instant tax write-off, introduced in the 2015 budget, which enabled immediate deductions for capital spending items under $20,000.

Gosnells-based SDE Mechanical owner Ben Sleep appreciated the write-off, which helped him buy a second-hand ute; he said it had been useful for ensuring good cash flow.

Similar to other small business owners contacted by Business News, Mr Sleep felt things had been slowing overall, although this had brought benefits for his business because in a slowing economy, he said, people were more likely to get cars fixed than buy new cars, and that trend had picked up recently. 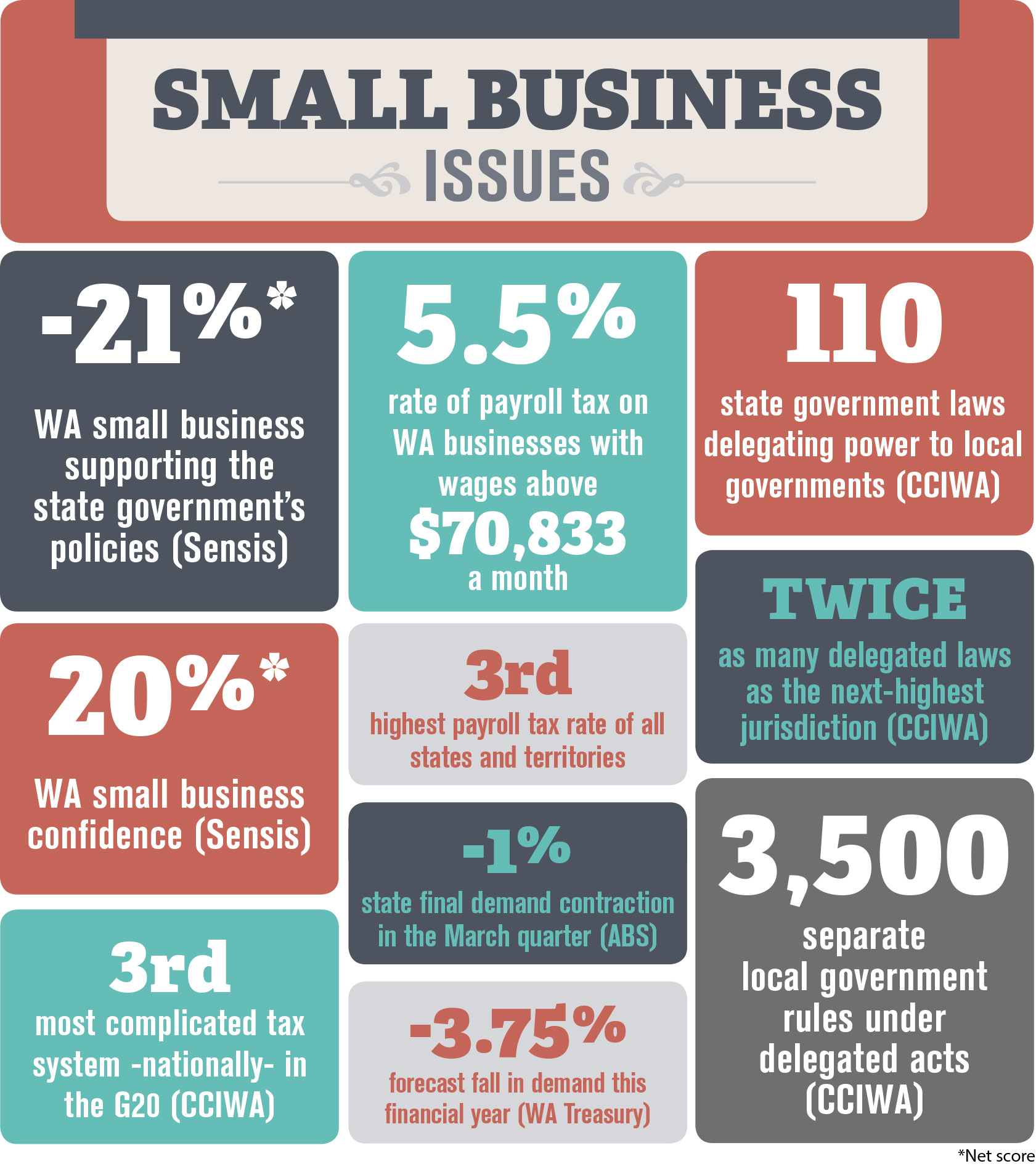 Mr Sleep’s biggest issues, however, were the complexity of the tax system and the red tape around hiring casual staff.

Even a small business would need an accountant to comply with all of the taxation rules, he said.

She said members had a major issue with the complexity of the tax system, and the time spent complying with obligations.

“And that’s not just their imagination,” Ms Willmott said.

“The (parliamentary) Joint Standing Committee Of Public Accounts and Audit found that we have the third most complex tax system of the 20 largest economies in the world.”

Federally, the CCI endorses the Turnbull government’s budget proposal for a cut to the company tax rate (to 25 per cent by 2026-27).

“In terms of state taxes, we have particular concerns about payroll tax,” Ms Willmott said.

“The government has recently introduced two increases to the threshold for payroll tax, it now sits at $850,000pa.”

Businesses with an annual wage bill below that level don’t pay payroll tax.

“There are no further increases in the system so we’re recommending that the government actually index that threshold and allow it to keep increasing so we don’t see bracket creep,” Ms Willmott said.

In the period between when Business News spoke to Ms Willmott and went to press, a resurgent Brendon Grylls and The Nationals WA have proposed an increase of the threshold to $1.5 million.

Gun Mart’s Mr Harris is scathing about payroll tax, saying he hopes it will be abolished as soon as the government is in a financial position to do so.

“We’re uncompetitive with the rest of the world,” Mr Harris said.

“(Payroll tax) ... that’s a shocking one isn’t it, being penalised for employing people.”

He said he was less likely to benefit from the proposed company tax cuts, as they were not helpful for the many businesses suffering from lower profits or even losses.

The Honda Shop’s Mr Peters said an increase in the payroll tax threshold would help his business.

And he said the federal government’s plan to lower the GST import threshold from $1,000 from July 1 next year couldn’t come soon enough.

“Pretty well across the board around Australia, business people are saying they can’t keep going, they’re going to have to close their doors unless you do it quickly,” Mr Peters said.

“All we’re asking for is an even playing field.”

There would still be some issues with the government’s proposed changes, he said, including the use of fraudulent invoices for importing and foreign entities not complying.

“It’s a huge lumpy expense for anybody investing in an asset for their business, but it also slows down the economy in that people will stay (living) in their houses for longer,” she said.

“In cars there’s actually a really perverse outcome; if you buy a car and it turns out to be defective and you take it back and get another car, you actually incur two lots of duty.

“It just goes to show how unfair these tax regimes can be.”

Ms Willmott’s concerns are backed by modelling in the Henry Tax Review, which found stamp duty and payroll tax to be two of the most inefficient taxes in the country.

For every $100 million raised through payroll tax, an additional $40 million is lost to society because of its high inefficiency.

A good policy would be to move away from ‘lumpy taxes’ and taxes on employment and instead look at a more widely distributed tax like a broad, low-rate land tax, Ms Willmott said.

Mr Harris was supportive of the government’s red tape reduction efforts, but said what was most important was that community leaders trumpeted a positive message about the economy.

“They’ve got to talk the place up,” he said.

“Talk a place down, no positive news … people are earning the same amount of money but they’re thinking, ‘have I got job security?’

“I need federal and state leaders to talk the economy up.”

Mr Peters highlighted the 17.5 per cent holiday pay loading for employees and penalty rates as two issues that came up in his discussions with other business owners.

“If you add all those 17.5 per cents it’d probably employ another person in the business.”

Despite recent initiatives by government to promote tourism, some policy settings were putting a real handbrake on the sector, with Ms Willmott saying penalty rates were particularly damaging.

“Cafes and businesses working in the tourism industry can’t afford to open with wage rates at two, two and a half or even three times award rate on a Sunday or public holiday,” she said.

An additional problem was conflicting federal and state industrial relations systems. Having two systems made it incredibly unclear for employers, particularly those that were unincorporated, as to what rules applied to them.

The solution, Ms Willmott said, might be to follow other states in handing over the WA Industrial Relations Commission powers regulating private businesses to the federal government.

Inconsistent regulations weren’t just a feature of employment law either, she said.

It’s a major thorn in the side of business owners with retail or hospitality operations in multiple places.

For example food stalls and mobile food owners were required to seek approval and pay fees in each different area where they operated.

Ms Willmott said the WA government had delegated the highest number of laws to local governments for enforcement of any state, at 110.

“As a result of that we have over 3,500 separate local government rules,” she said.

National Australia Bank business state general manager John Boyle said the bank had observed a number of companies revisiting their strategies this year to adjust to the financial environment.

Yet some were still seeking to expand when they had identified the right opportunities.

“Some businesses are also investing or contemplating doing so, countercyclical ... to be ahead of their competition,” Mr Boyle told Business News.

“We are seeing some businesses relishing in the opportunities presented and others are really looking at all ways to reduce costs as they continue to maintain revenues and margins.”

There was some good news in the latest Nab innovation index, however, with WA scoring the highest on cost efficiency and innovation, a positive step towards improving competitiveness.

“Whilst some industries have been impacted by the growing level of caution, this isn’t true across all sectors,” she said.

“Businesses reliant on mining are feeling an impact, but there are pockets of industries across WA that are experiencing an uptick in trading and spending.

“In particular the more services-based industries such as hospitality, tourism and healthcare are seeing good levels of growth and opportunities to expand.”