After opening the first DoubleTree by Hilton hotel in Australia, hotels developer SKS Group is advancing a raft of new Perth projects. 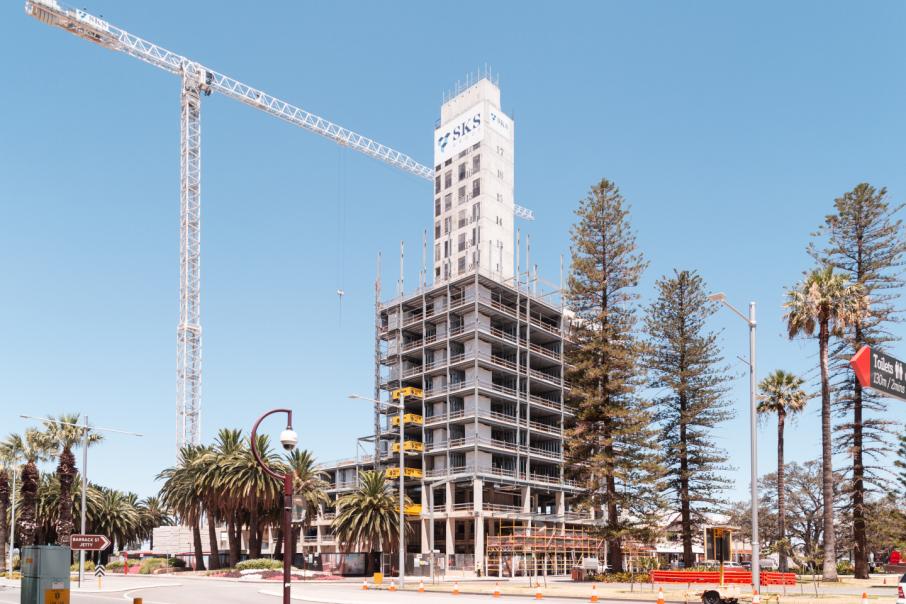 SKS Group's DoubleTree by Hilton at Barrack Square is expected to be complete by the end of the year. Photo: Gabriel Oliveira

After opening the first DoubleTree by Hilton hotel in Australia, hotels developer SKS Group is advancing a raft of new Perth projects.

Hotel and apartments developer SKS Group is shifting its focus to completing its DoubleTree by Hilton hotel at Barrack Square and launching a Hilton Garden Inn at Cockburn, following the opening of its DoubleTree Northbridge property.

Tourism Minister Paul Papalia was on hand to officially open SKS Group’s James Street hotel last month, saying the property would be well placed to capitalise on a burgeoning major events calendar over the next 12 months.

The opening frees SKS Group to pivot its focus towards its Barrack Square hotel, which was originally scheduled to be completed by the end of last year.

SKS Group general manager Francis Foong told Business News at the opening of the Northbridge property that construction at Barrack Square was progressing well, and the hotel would likely be completed by the end of 2019.

Mr Foong said the developer also hoped to begin construction of its Hilton Garden Inn property at Cockburn by the middle of the year.

SKS Group’s $80 million, 122-room Garden Inn proposal, which also comprises 109 apartments, was originally launched as a Hampton by Hilton hotel and will be located on Signal Terrace.

Mr Foong described the Cockburn property, which was designed by Box Architects, as an exciting project that would help to round out the town centre offering at Cockburn Central.

A $115 million, 150-room DoubleTree property in Fremantle, however, is less certain to proceed in 2019, with the developer having little success in selling 98 apartments on offer at the Point Street site.

SKS Group launched a sales campaign for the apartments component of its Fremantle proposal, known as Ancora, through Colliers International in late 2017. But despite the marketing effort, SKS has not been able to secure enough pre-sales to underpin the project’s construction.

The Fremantle property was intended to be built by early 2017 after the project was announced to the market in March 2014.

SKS Group acquired the Point Street plot from the City of Fremantle in 2012 for $11 million.

But nearly five years after the project’s launch, the only progress made on site is the clearing of half of the lot and the establishment of a sales office, while a Wilson  car park that will make way for the development is still operating.

Business News understands the earliest SKS Group expects to start work on the Fremantle project would be October this year, pending a successful sales campaign.

Continued delays in the project mean the hotel, if built, will launch in a very different Perth hotels market than when it was announced in 2014, when hoteliers enjoyed occupancy rates consistently in excess of 80 per cent.

Occupancy of Perth hotels in the 12 months to September last year averaged around 72 per cent, according to data from Savills, largely due to the biggest wave of hotel construction in the city’s history.

Since 2012, more than 2,300 new hotel rooms across 18 properties have been added to the existing stock in Perth’s CBD, ranging from the ultra-luxury COMO The Treasury on St Georges Terrace, to boutique developments such as Northbridge’s Alex and Attika hotels.

In total, there are 2,251 rooms in new hotels developers have either committed to build or are currently constructing.

Considerable hotel development has also occurred outside of the CBD, with 737 rooms having been delivered since 2012 and a further 314 under construction.

At the opening of the Northbridge DoubleTree, Mr Papalia said the hotels boom had been a major contributor to the continued diversification of Perth’s hotels offering.

“The addition of quality hotels such as the DoubleTree by Hilton will only help to attract more visitors to our state, which forms the basis of the two-year action plan launched by Tourism WA last year,” he said.

The new builds, however, have come at a time of decreasing tourist arrivals in Western Australia, with Perth Airport data released late last month indicating a 14 per cent decline in international arrivals in October and November.

Spending by international visitors in WA fell by $166 million in the 12 months to September last year, according to data released by Tourism Research Australia.