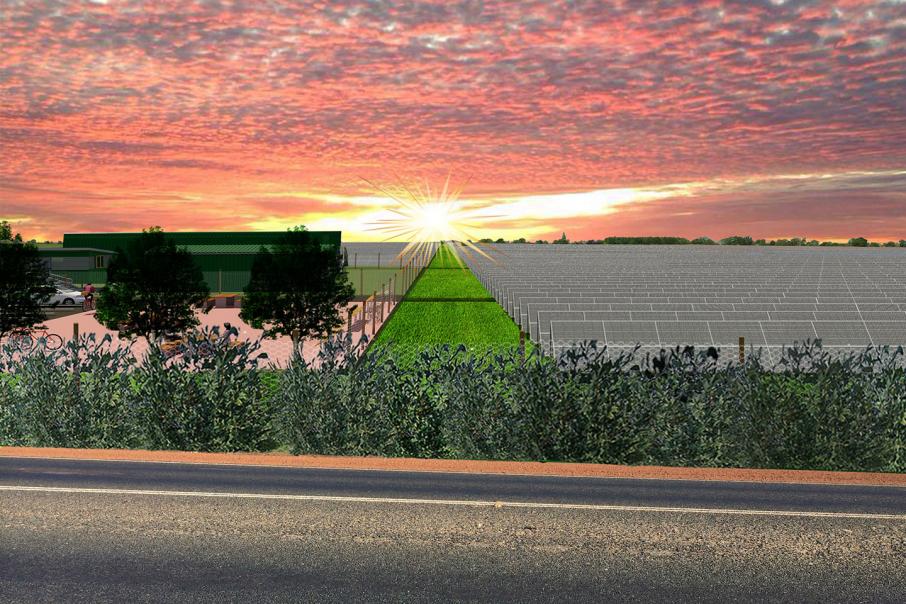 An artist's impression of the Byford Solar Farm.

A joint venture between WBHO Infrastructure and German company Phoenix Solar has been awarded the engineering, procurement and construction contract.

WestGen director Richard Harris said his company expected to reach financial close next month, with construction scheduled to commence in September and commissioning expected in mid-2018.

Byford will be the state’s largest solar farm, with capacity of 30 megawatts.

It will also be the first utility scale solar farm to be built within a metropolitan area in Australia.

In addition, there are more than a dozen renewable energy projects at an advanced stage of planning across WA, according to research by Business News.

This includes five solar farms and three wind farms, along with wave and biomass projects with a combined capacity of more than 1,000MW.

The likelihood of some of these projects proceeding has been helped by a major rule change approved last month by Energy Minister Ben Wyatt.

Historically, developers of large-scale power stations have needed to make costly investments in network infrastructure to ensure they will not adversely affect existing generators.

Under an interim access solution approved by the government, new generators will be able to connect to Western Power’s transmission network on a ‘constrained’ access basis.

This is meant to reduce the high cost of connecting to the network, but without affecting the ‘unconstrained’ access of existing generators.

Mr Wyatt has amended the wholesale electricity market rules to enable new generators to be certified for capacity payments.

He was non-committal when asked if WA planned to align with the rest of the country and move to a constrained regime, in which case new generators would be required to make payments if they adversely affected existing generators.

“The state government will engage with industry in determining the longer-term changes to the regulatory framework to appropriately address the barriers to connecting new projects,” Mr Wyatt told Business News.

Synergy is evaluating an expansion of Greenough River to 40MW.

Under the joint venture structure, Phoenix Solar will be responsible for project design, procurement of equipment and electrical contracting, while WHBO will focus on civil works and construction.

“Not only will it set a new benchmark for solar projects in WA, but will also provide benefits for the local economy, with opportunities for our workforce, as well as for subcontractors and suppliers,” Mr Grobler said in a statement.

“We’re proud to be helping provide clean energy for Western Australia, and are looking forward to delivering this landmark project.”

"With this large project, Phoenix Solar is not only reentering the market of ground-mounted utility-scale solar PV power plants in its Asia/Pacific region but we also make a big step onto the Australian market which we see as an emerging solar PV market with multi GW scale annual build out expected in the coming years," he said in a statement.

"We are confident that we shall be able to gain our share of these considerable opportunities and are looking forward to continued growth in the entire region."

The Byford project is underpinned by a 10-year offtake agreement with Kleenheat.