Roy Hill to get up on sell-down: JP Morgan 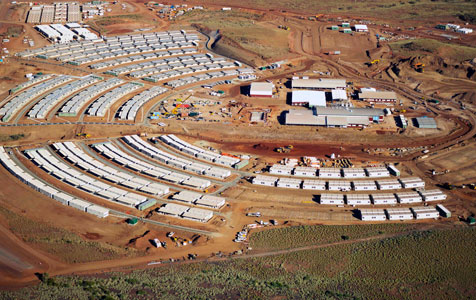 The construction village being built at the Roy Hill mine site.

Gina Rinehart’s flagship $10 billion Roy Hill project should become an iron ore mine, but it might not turn out to be the goldmine she’s hoping for.

In one of the first attempts to analyse the financial fundamentals of the proposed mine, one of the world’s top investment banks, JP Morgan, has estimated a base case internal rate of return (IRR) on the investment at just 10 per cent.

That might be enough for Roy Hill to secure the debt funding needed for construction to proceed, but it could be viewed as a marginal financial return only just above the cost of capital.

As a general rule, projects with a reasonable return above the cost of capital are funded. Those too close, or below, are not.

The 10 per cent estimate has been calculated by JP Morgan using its own assumptions, including a long-term iron ore price of $US80 a tonne (with Roy Hill receiving $US84/t thanks to a premium for high-grade lump ore) and an exchange rate of US80 cents.

The financial performance would be much higher if the mine was at full production of 55 million tonnes a year now, with spot prices of iron ore around $US130/t and a $A at US92.6 cents lifting the IRR to 22 per cent.

The problem for Mrs Rinehart and her master company, Hancock Prospecting, is that Roy Hill is not in production and the start-up date keeps slipping further out.

The current date set by Hancock is September 2015. The bank reckons a more likely date is mid-2016, to allow for financing arrangements to be finalised with a syndicate of banks and government-backed export-credit organisation, as well as a further possible sell-down by Hancock of its 70 per cent stake in the project, which also has South Korean, Japanese and Taiwanese investors.

All mine development proposals are currently under pressure at management and financing levels, with most big companies deferring some developments until commodity prices rise.

Iron ore is different in that (so far) it has avoided the sharp fall widely predicted as a ‘wall of supply’ heads for the market, which is expected to be oversupplied by up to 400mt tonnes iron ore over the next few years.

Rio Tinto, Australia’s lowest-cost producer, is the only big miner steaming ahead with expansion plans in a bold attempt to seize market share ahead of the flood, and in order to drive its costs down from $US50/t to $US35/t.

Roy Hill, according to JP Morgan, is likely to have a cash cost of $US37/t, with an ‘all-in’ landed cost in China of about US67/t when at full production.

That all-in cost, which includes royalties, shipping, financing and accounting charges, is the challenge awaiting Mrs Rinehart; because if JP Morgan is correct with its best guess of $US84/t for Roy Hill ore, there is only $US17/t for the owners to share – a number that drops to $US16/t after making a tax provision.

“At full production, Roy Hill sits in the middle of the cost curve, and is likely to displace high cost domestic (Chinese) supply,” the bank said.

Financing is said to be the key hurdle to complete construction of the mine, at which a number of early infrastructure items have already been built – including an airport at the mine site and dredging at berths in Port Hedland.

“We estimate a debt package of around $A7 billion is required to complete the project,” JP Morgan said in its analysis dated September 11.

“In our view a debt package of that order of magnitude may be difficult to secure without a further potential sell down of project (equity injection).”

The bank said that, based on its long-term price assumptions, Roy Hill would generate about $US1.1 billion (a year) of free cash flow.

“Assuming $A6 billion to $A7 billion in debt is required to complete the project, at an interest rate of 8 per cent we estimate interest payments would be just below $A500 million in the initial years,” it said.

“Based on the size of the debt facility required, at a time when the consensus outlook for iron ore prices is for a structural decline, we believe the project is more likely to get up and running if the joint venture partners sell down more equity.”