Is it Rottnest’s relaxed ambiance, or are people just more relaxed overall about ignoring rules they regard as draconian? 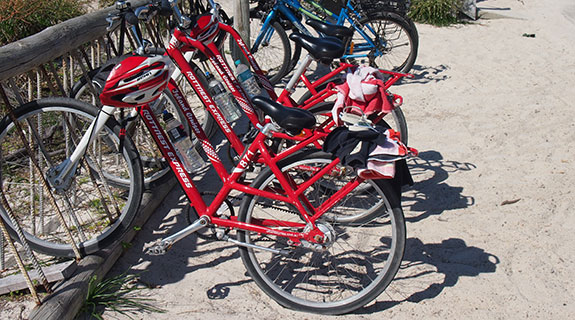 COSMETIC VALUE: Many riders seemed to be carrying their helmets, rather than wearing them, this Rottnest holiday.

Is it Rottnest’s relaxed ambiance, or are people just more relaxed overall about ignoring rules they regard as draconian?

Every year for the past decade we’ve made a family expedition to Rottnest Island – and writing a column on that time is an annual highlight.

In years gone by I’ve both praised and chided the Rottnest Island Authority for its work, given my views on what development should take place, analysed the high cost of employing wind power, and used my experiences at the holiday resort as analogies for application in the real world – on the mainland, where clocks seem to work and phones are allowed to ring.

This year, two things struck me as evidence that Rottnest, like the mainland, was being pulled in competing directions.

The first was a sign placed at the bottom of a ‘stairway’ composed of pine logs chained together to provide an access way between different rows of cottages out by Longreach Bay. The sign, which my friends and I could not recall from previous years, highlighted the unevenness of the stairs and impressed on the reader the need for caution.

It is one of those pieces of visual pollution that (no doubt on the advice of some committee of risk mitigation experts) sought to state the obvious. In daylight, even someone who couldn’t read English would be aware that the stairs were uneven. At night, no matter what your language, the sign was not legible.

We all wondered how the cost of devising, producing and installing these signs compared with that of installing a proper stairway.

It was quite a minor thing and, in years gone by, would normally have failed to warrant a mention in this column. But its juxtaposition with a much greater change from previous years meant it got a guernsey as an example of anachronistic behaviour that is swimming against the tide of normal social mores.

No-one wants to be told what to do any more; they are sick of silly rules and warnings when common sense will do. And that is why a huge proportion of people on Rottnest during the week I was soaking up island life had decided not to wear bicycle helmets.

Let me be clear, I’m not talking about a few rebels; a lot of people rode without the skidlid. It may well have been the majority. I didn’t do a headcount or even a survey beyond the occasional glance, but those I was holidaying with backed up my observations. Those displaying disdain for the rules were kids, adults, tourists and locals.

I didn’t see anyone being told off by the police and I heard nothing anecdotally about any form of sanction.

Part of me wanted to secretly enjoy this mass flouting of the law, in part because just mentioning it will, probably, cause someone to blow a valve and demand that the law be enforced.

My gut feeling was that this is the ‘Uber-fication’ experience. Most people are law abiding, accept community standards, and agree that rules created by democratic institutions are generally for the best. But there is a limit.

When rules become outdated, or simply serve little purpose, we are increasingly inclined to ignore them. The impact of uber, a perfectly sensible transport idea that required the development of smart phones to work, is the most obvious example of this; but there are many others.

Of course, the good people of Western Australia have been ignoring silly laws for a long time, but they have done it with caution. Having a wine or a beer in the park is as illegal as riding a bike without a helmet, but I think it is only recently we’ve become so used to its lack of enforcement that we take it as a right to indulge in public. In fact, I reckon quite a few new arrivals to WA would be unaware of this ridiculous law.

The bike riders of Rottnest reflect a wider disdain for laws that just don’t seem fit for purpose. It would be an interesting statistical analysis to see if head injuries incurred on Rottnest are significantly reduced from the days when helmets were not legally required.

Perhaps there is a simple way to control this. Every law that restricts someone’s freedom, including the freedom to start a business such as Uber, ought to have a sunset clause so that they can’t be renewed without society debating their value.

In the interim, I enjoyed Rottnest’s sunsets immensely, especially those that cast their last rays on bare heads enjoying the island’s freedom.