Rotto nostalgia not what it used to be

Nostalgia is no longer a valid reason to stop the modernisation of Rotto. 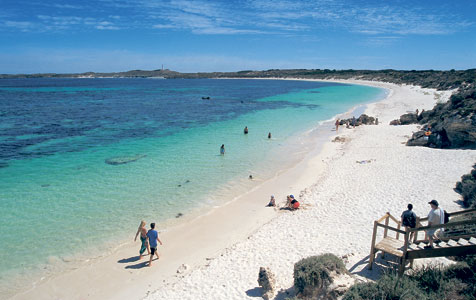 COMPETITION: Family-friendly Rottnest may be, but its standards continue to slip behind those of other, more accessible destinations.

Nostalgia is no longer a valid reason to stop the modernisation of Rotto.

Despite the popularity of television series such as Mad Men and Magic City, which recast the 1950s and 1960s as cool and sophisticated, few of us would really want to go back in time to live in those eras.

Society has moved on in so many ways. Technologically and culturally, those times offered far less in the way of choice and opportunity, even though the small screen has managed to make them seem so swell, to use an appropriate term.

Nostalgia is a strong force, however. Its selective memory recalls mainly the positive, suppressing or consciously overlooking the nasty and the negative.

And it is a force to be reckoned with in the case of developing one of Perth’s favourite holiday destinations – Rottnest Island.

After decades of stagnation, or creeping change at best, the island’s future is again the subject of debate following proposals to privatise parts of the accommodation and develop new tourism options in order to bring the resort up to the standards of the 21st century (and pay for its upkeep).

As usual, however, sensible change is likely to be held hostage to those who, for a variety of reasons, fight modernisation and progress tooth and nail.

The broad church of anti-progress on Rottnest embraces the environmental and cultural – both are nostalgic for something that does not exist. That is not to say, I must add, that our favourite island should be turned into the Gold Coast.

Environmentally, Rottnest is a very different place from the heavily wooded island named many centuries ago by Dutch seafarer Willem de Vlamingh.

In the early days of the Swan River Colony that became Western Australia, Rottnest was farmed and exploited for other resources. At one point, the land was even sub-divided in preparation for a stand-alone township before it was realised that the island was unlikely to sustain a big population and, infamously, it became an Aboriginal prison.

The isolated people on the island cleared much of the native vegetation, leaving Rotto even more denuded of foliage than we see today. Of course, the waters around the island and its reefs are quite pristine, notwithstanding a few passages dynamited by entrepreneurial boat owners as late as the 1980s – or so I recall.

As for culture, I do find it tiring to hear how Rottnest is a great egalitarian holiday resort where rich and poor co-mingle and share the most basic of needs of life.

When I was a boy, Australia was more egalitarian and the standards of the day were shared more broadly than they are today, both in Perth and over at Rottnest – one of the few affordable getaways city dwellers could find in the days before ‘Down South’ became a destination, let alone a playground of the rich.

But Australia has changed. The Rottnest of my youth, without flywire, television and freshwater showers, is a thing of the past – even if only just. As a seven-year-old those things were fun; but goodness knows how my mum put up with it – she certainly hated the sickening two-hour voyage in the rolling tub called the ‘Islander’. I never hear any objection to the modernisation of Rottnest’s ferries.

And anyway, let’s be clear; egalitarian Rottnest was preceded by a more upmarket stage in its life as a holiday destination when few Perth residents would have had the time or the money to afford a week or two ‘overseas’.

The current approach to island management, hamstrung by poor funding and high costs created by distance, heritage and strict environmental rules, has delivered a service that is considered sub-standard by many.

I love the place and holiday there every year, but I am still surprised at how little you get for your money. Of course, for me, the island’s beauty, its remoteness and family-friendliness go a long way to make up for that. These are all strengths that can be preserved in the face of progress.

Other people are less forgiving. They are consumers too. They are simply less willing to put up with what they consider poor service for the other experiences the island offers. Why should they be denied the joys of Rottnest just because they are bit fussier than I am?

So let’s stop latching on to distant memories, distorted by time, and focus on bringing Rottnest into the modern age.